Premier became the topic of discussion after he blamed 'fahashi' as the root cause of rape cases, sexual violence 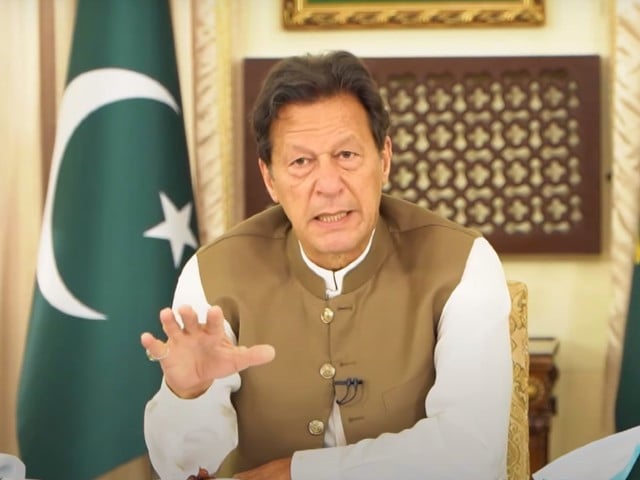 Prime Minister Imran Khan responds to the questions of the citizens in a live session on April 4, 2021. SCREENGRAB

Prime Minister Imran Khan became the topic of discussion after he blamed 'fahashi' (vulgarity) as the root cause of the rise in rape cases and sexual violence in Pakistan. In a recent interactive session with the public, a caller inquired the premier about the steps his government plans on taking to tackle the rise in the cases of sexual violence.

PM Imran shared how the rise in vulgarity seems to be proportional to the sexual aggression in society. "Aaj jis maashray mein aap fahashi barhatay jayen, toh koi tou us ka asar hoga na. (In any society where vulgarity is prevalent, there are consequences)," he shared. "Humare deen mein kyun mana kiya gaya hai? Ye sara jo parday ka concept hai, yeh kya hai? Ke temptation na ho maashray mein. Har insaan mein will power nahi hota. (The reason why our religion stresses on covering up your body and maintaining modesty is to avoid any such temptation. Not everyone has the willpower to avoid it)."

Soon after his comments, there was an uproar on social media. Many called out the premier for his 'insensitive' remarks.

Anyone blaming clothes and not the rapist is a rape apologist.

His propagation of this rape myth shows he has no understanding of the issue, and amounts to providing excuses for criminal acts of perpetrators while blaming the victims

Earlier, in an interview with a local channel, PM Imran had said that there was a rapid spread of ‘indecency’ in the world. “We have an advantage over other developed countries in the world. We have a family system that has not been touched by indecent influences. Look at Bollywood, look at the difference in their films now and those 40 years back. The indecency has grown to such exponential levels that Delhi has become the rape capital of the world,” he had commented.

Ignorance of Hon PM on the rape issue is typical for Pakistan men who feel inherently superior to women. India had a similar mindset just about 10 to 15 years ago. But Bollywood took a stand and with the judiciary and political support women got liberated. Hon PM should watch movies like PINK that was acted by Amitabh Bachhan to understand the issue and definition of Rape and get laws to protect women of the homeland.

Shame on you PM. Oxford graduate but ignorant to the bone.