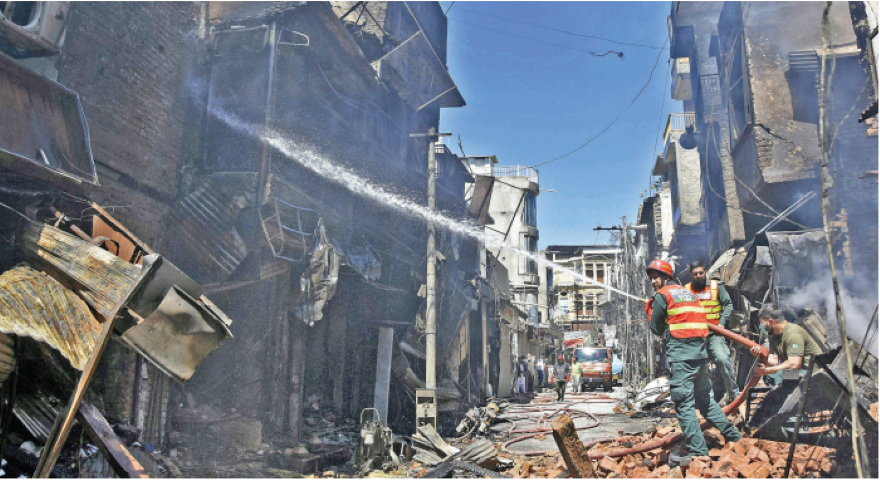 BURNT TO ASHES: The cooling process continues in the fire-hit Urdu Bazaar as smoke rises from the shops gutted in the blaze a day ago.
RAWALPINDI:

The traders whose businesses were reduced to ashes in the Urdu Bazar fire a day ago have accused the Water and Power Development Authority (Wapda) of being responsible for the incident. Demanding a full investigation into the matter at a press conference on Friday, the traders also requested the federal and Punjab governments to estimate the loss and take steps to rehabilitate the traders.

In the meanwhile, the Rawalpindi city authorities continued the cooling process in the fire-hit market and removing the debris.

When this correspondent visited Urdu Bazaar, smoke was still rising from the shops, and in some areas, heat could still be felt from the ruins.

On Friday afternoon, after the fire had been brought under control, business leaders Kashif Chaudhry and Sharjeel Mir held a press conference and alleged that Wapda was solely to blame for the fire. They said the overhead high voltage wires were hanging in a haphazard manner in the densely populated bazaar and Wapda had never responded to the traders’ requests to have the wires restrung in a safe manner. They pointed out that if the power lines were not hanging in an untidy manner, there would have been no fire. The traders affected by the fire said that the department responsible for the incident should compensate traders for their losses. They said the fire brigade did a good job but some of the Rescue 1122 vehicles arrived late because they had to negotiate through encroachments.

The affected shopkeepers have urged the government to provide interest-free loans to owners whose shops have been gutted.

They said that two buildings in the bazaar had collapsed while many others would have to be subjected to stringent tests but in all probability would have to be torn down. The traders’ representatives appealed to the government to help the affected shopkeepers get back on their feet.

Meanwhile, the representatives of various traders' organisations visited Urdu Bazaar to express their solidarity with the affected shopkeepers and assured them that they would stand by them in their hour of need. At least 23 shops burnt to ashes and two buildings collapsed as a result of a fire in Rawalpindi’s Urdu Bazaar on Thursday. Moreover, more than 20 motorcycles were gutted by the fire while a 60-year-old man sustained burn injuries. Subsequently, seven institutions, including the Pakistan Army, took part in the fire extinguishing operation. Witnesses said that there was a short circuit in the electricity wires outside a stationery and decoration shop and a banner caught fire and engulfed a huge portion of the market in little time.

Rescue 1122 spokesperson said they received a call at 12:58 pm after which the firefighting teams rushed to the location. The traffic on Raja Bazaar, Bohar bazaar, Iqbal Road, and Bani delayed the arrival of the firefighters. He said that 12 fire tenders, five ambulances, two special rescue vehicles and another vehicle took part in the operation to put out the fire. Besides Rescue 1122, two fire tenders of Pakistan Army, three of CDA fire service, four rescue vehicles, two water bowsers, three fire trucks of Bahria Town, one fire tender of Cantonment fire brigade, and 23 water tankers of WASA took part in the operation.