Rescuers make efforts to put out a blaze that caused havoc in Rawalpindi's Urdu Bazaar on Thursday. PHOTOS: APP
RAWALPINDI:

At least 23 shops burnt to ashes and two buildings collapsed as a result of a fire in Rawalpindi’s Urdu Bazaar on Thursday.

Moreover, more than 20 motorcycles were gutted by the fire while a 60-year-old man sustained burn injuries. Subsequently, seven institutions, including the Pakistan Army, took part in the fire extinguishing operation.

Witnesses said that there was a short circuit in the electricity wires outside a stationery and decoration shop and a banner caught fire and engulfed a huge portion of the market in little time.

Rescue 1122 spokesperson said they received a call at 12:58 pm after which the firefighting teams rushed to the location.

The traffic on Raja Bazaar, Bohar bazaar, Iqbal Road, and Bani delayed the arrival of the firefighters.

He said that 12 fire tenders, five ambulances, two special rescue vehicles and another vehicle took part in the operation to put out the fire.

While talking to the media, the minister said the government would help the traders who had suffered a loss due to a fire eruption but their priority was to extinguish it.

Further, WASA MD said that they imposed a fire emergency after assessing the intensity of the fire while 23 water bowsers were stationed at Urdu Bazaar.

Rawalpindi DC said that they were utilising all resources to put out the blaze.

He said that Urdu Bazaar was an ancient bazaar where no planning was done for the past seven decades.

He said wood has been used in the construction of several buildings due to which the fire intensified and continued for a long time. Haq said that narrow streets and disorganised constructions impeded fire extinguishing operations.

The area was cordoned off to provide rescue teams easy access to the incident site.

Due to the arrival of Ramzan, Urdu Bazaar was packed with visitors. 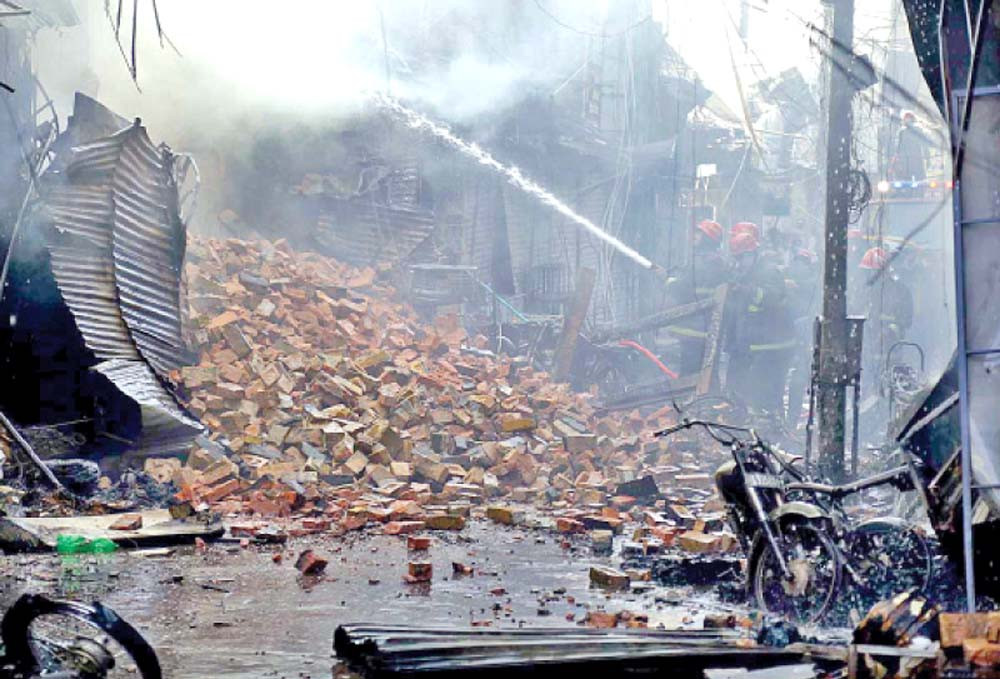 Meanwhile, the traffic in Rawalpindi was also disrupted due to the fire and the City Traffic Police (CTP) issued an advisory to guide motorists about alternative routes.

A spokesman for the district administration said that as soon as the fire was reported in Urdu Bazaar, the power and gas supply to the area was cut off to prevent the spread of fire.

While talking to the media, the traders’ representative Tahir Taj Bhatti that no casualty was reported in the incident however the traders had suffered the loss of millions of rupees.

The elderly fire victim said there was a spark in the electricity wires and a flame fell upon a banner that caught fire. In a moment, the fire started spreading and engulfed the entire market.

He added that they would demand the government to help the affected traders.

The district officials said that 23 shops were affected by the blaze.

City Assistant Commissioner (AC) has formed a committee to calculate the total loss.

Punjab Chief Minister Usman Buzdar also took notice of the fire incident and instructed the Rawalpindi administration to utilise all resources in the operation.

In a statement issued by the Punjab information department, Buzdar has summoned a report on the incident.

Rawal SP Ziauddin said that the fire erupted due to a short circuit while they would take the assistance of forensic experts to further probe the incident. He added that the testimonies of the witnesses would be recorded too.

SP said that no casualty was reported in the incident so far however a search operation would be carried out after the fire was completely put out.

'MQM-P standing by industrialists and traders'