Pakistan Day is celebrated on March 23 annually to commemorate the Lahore Resolution of 1940 that eventually led to the creation of Pakistan. PHOTO: AFP/FILE
RAWALPINDI:

Cellular service in selected areas of the twin cities will remain suspended from 5am till 12pm as a security measure during the Pakistan Day parade scheduled for Thursday, a spokesperson said on Wednesday.

The Rawalpindi administration has already announced a holiday for March 25 after the parade was rescheduled from March 23 due to inclement weather. According to a notification, all government and private institutions in Rawalpindi will remain closed on Thursday.

Pakistan Day is celebrated on March 23 annually to commemorate the Lahore Resolution of 1940 that eventually led to the creation of Pakistan.

The parade, which is the main feature of the annual national day celebrations, will be held in Islamabad with compliance of all the anti-Covid Standard Operating Procedures (SOPs).

More than 1,000 police personnel would be deployed to maintain law and order in Islamabad and Rawalpindi and to control traffic.

Sources told The Express Tribune that kite-flying, aerial firing, and releasing pigeons into the air in the areas around the parade ground have been banned, while residents are also not allowed to come out on the roofs of their houses or building complexes.

Moreover, contingents of army and police will be deployed at Faizabad interchange and nearby areas of the parade ground. 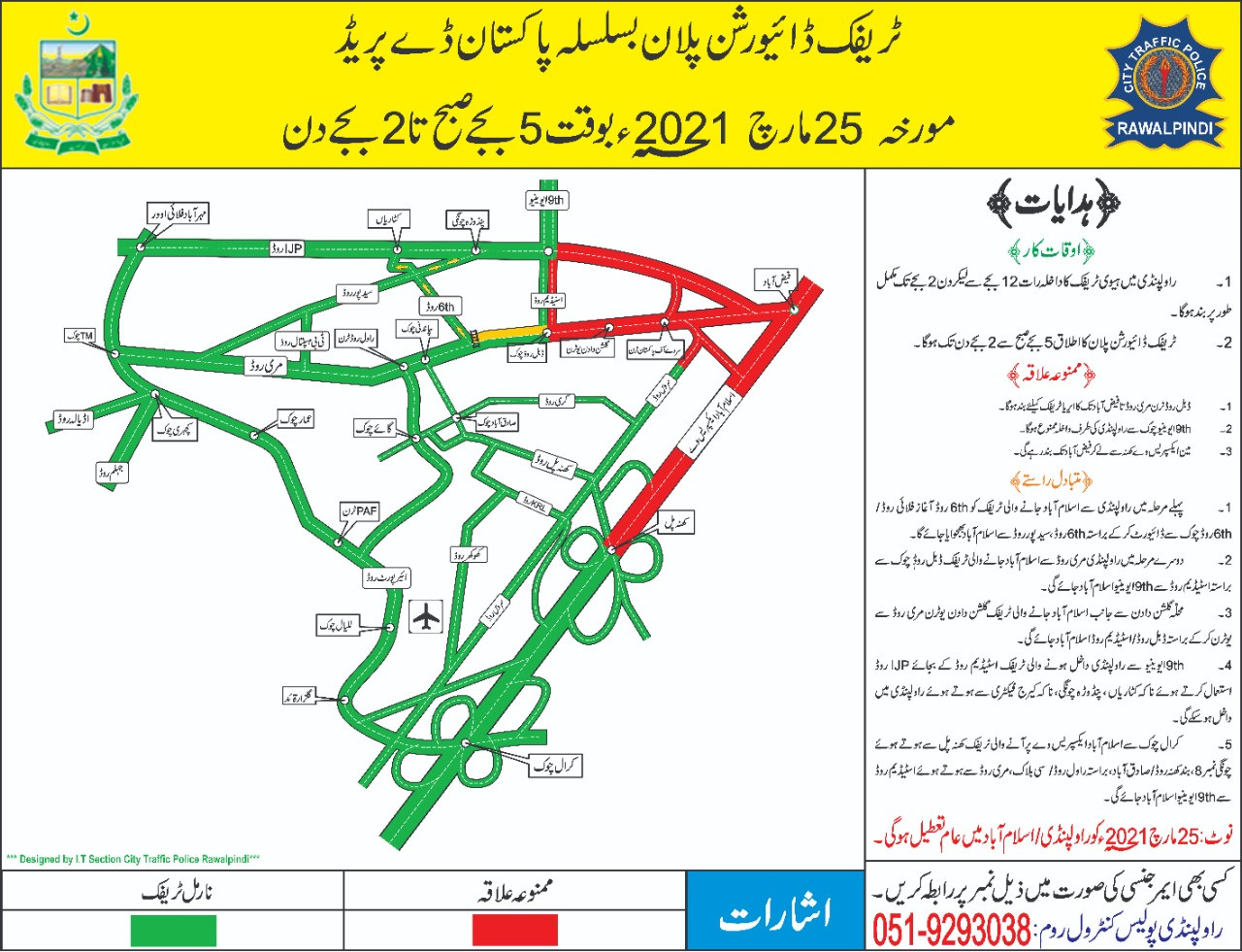 The City Traffic Police (CTP) has issued a traffic plan for the Pakistan Day parade, according to which, nine DSPs, 25 inspectors, 272 wardens, and 69 traffic assistants will be utilised to maintain the flow of traffic in the city, a spokesperson maintained.

The entry of heavy traffic in the precincts of Rawalpindi has been banned from midnight while the routes to Islamabad and Rawalpindi from Faizabad interchange will remain closed until noon on Thursday.

Read more: Pakistan Day parade to be held under SOPs

Chief Traffic Officer (CTO) Rai Mazhar Iqbal directed all DSPs and in-charges to perform their duties diligently. He added that no lethargy would be tolerated by any officials on the day.

Pakistan back on track to materialise Quaid’s vision under PTI govt: PM