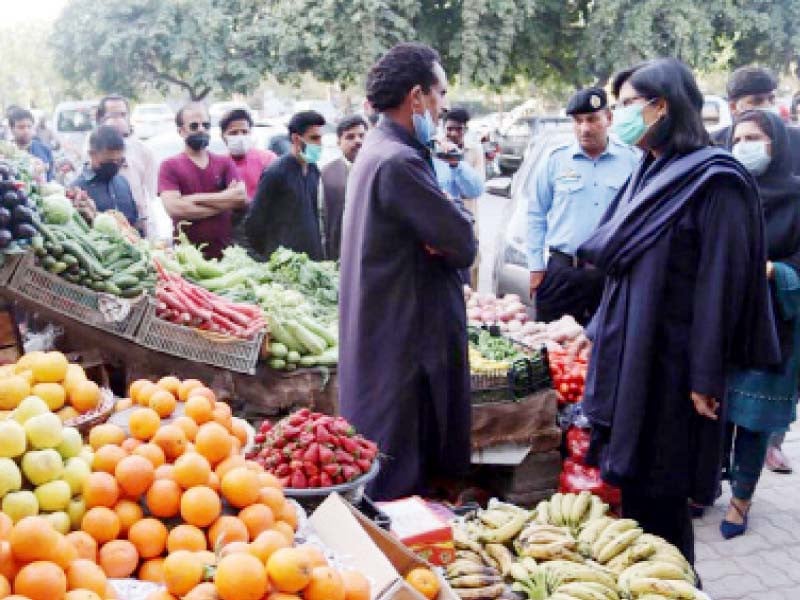 The Ehsaas team is collaborating with Islamabad Municipality Corporation (IMC), the Capital Development Authority (CDA) and the Pakistan Institute of Development Economics (PIDE) to explore a sustainable and evidence-based solution to support street vendors, she said during her visit.

“We are aware of the difficult working conditions for street vendors, but it is also a matter of fact that other citizens have the right on the usage of public space,” she added.

Dr Sania toured the Markaz and met with vendors, including a 42-year-old Shaheen Akhtar, the only female street vendor in the market selling home-cooked food. She informed about various operational issues being faced by her in the market.

At present, 85 street vendors are operating in the area, among which some have been working there for over 15-years but none of them operates with a licence, the administrator told SAPM. Lack of legal status makes vendors susceptible to frequent eviction campaigns and rent-seeking exploitation, she added.

He stated that a whole informal ecosystem existed in commercially viable public spaces for accommodating street vending. “On per square feet basis, they are paying more monthlies to do their business than the rent of the formal shop in the area.

However, perpetual fear and uncertainty of tenure constraint restrict the capacity of vendors to sustain more hygienic practices,” he lamented.

Street vendors asked the authorities to recognise their role in the generation of self-sustaining economic activities and poverty alleviation. Under Ehsaas, Vendors’ Support Group has also been set up which is overseeing the development of a number of interventions in streamlining vending in the city.