They say water is life. But can it breed death? 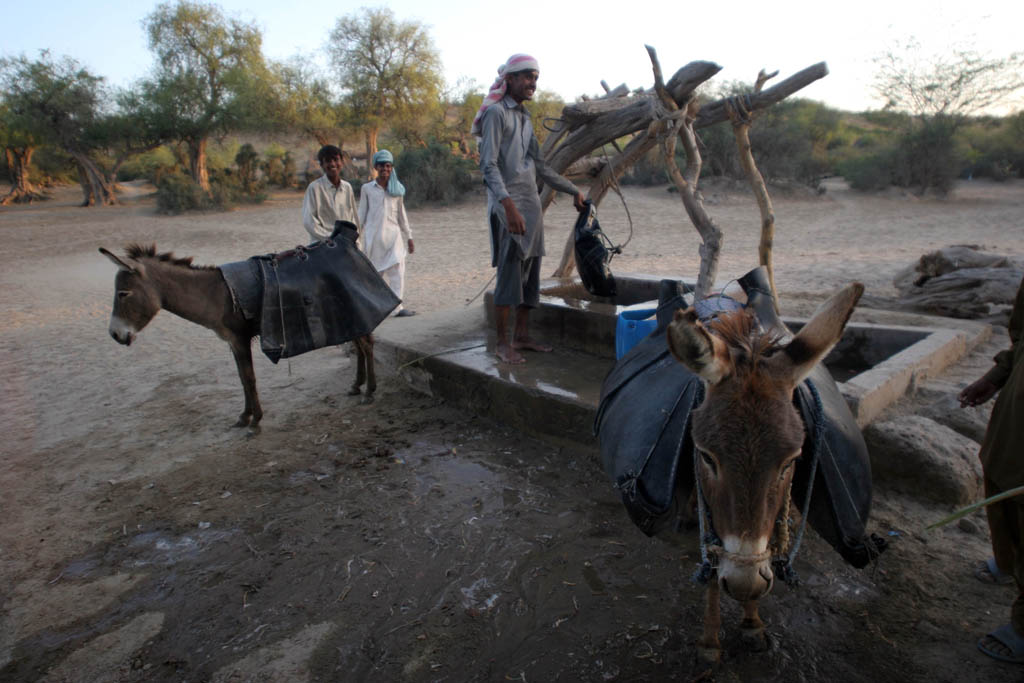 They say water is life. But that may not always be the case. In some ironic situations, as being witnessed in villages near Thar block-II, water can make survival difficult.

Among these villages, one is Gorano - the nearest one to a recently created pond, which the villagers deem to be a hazard in the making.

The pond, a vast and expanding body of brackish water, was formed after water discharged from Thar Block-II, where work on a coal-fired power plant and coal mining is underway, began accumulating in the area.

An area of 2,500 acres was marked for the pond, which was planned to contain the water disposed of. However, at the moment, the pond covers an area of over 4,000 acres and 12 villages in its surroundings are facing its hazardous effects.

The spokesperson of the Sindh Engro Coal Mining Company (SECMC), however, claims that the total area reserved for the Gorano pond was approximately 1,500 acres and the water has accumulated only in an area of around 500 acres.

While the design plan for the project in Thar Block-II shows no settlements within five kilometres of the pond, on visiting the site, one will find an old mosque, a well and a village called Suleiman Hajjam. The village is less than a kilometre away from the water body.

The location to store the water was selected keeping in mind that it would later have to be used for cooling the power plant.

According to the villagers, the water that forms the pond is not treated.

"It stinks and is a breeding ground for mosquitoes and other insects," said one disgruntled villager, who asked not to be named. "The water body is a source of diseases that are fast spreading in surrounding villages."

Moreover, the villagers complain that coal deposits in the pond have contaminated groundwater in its vicinity and consequently, what they have in their wells is a black and stinking viscous fluid instead of potable water.

When asked about these problems, the SECMC spokesperson maintained that there was no evidence of groundwater around the Gorano pond having been contaminated.

"On the contrary, as per authentic laboratory tests conducted by third party auditors, water quality of wells installed around the Gorano pond has remained unchanged and no evidence has been found of the presence of toxic and chemical substances in the water samples," he told The Express Tribune. "Water that is being released in Gorano pond is just ground water that doesn't undergo industrial processes. The breeding of fish in the water body is an evidence of the water being fit for aquatic life."

On the other hand, a water testing report of samples from Gorano, Thar Block-II, issued by the Soil Salinity and Reclamation Institute Tandojam, has declared the water unfit.

According to the report, dated July 17, 2020, the ratio of total suspended solids in stunt water was found to be above 6,000 one part per million (ppm), deeming the water unfit for irrigation.

Similarly, a report by the Centre for Research on Energy and Clean Air, issued in May 2020, states that Thar will be a major air pollutant and mercury and CO2 emission hotspot in South Asia.

As many as 29,000 deaths are directly attributable to air pollution resulting from coal activities in the area. Mining and power production there have led to an increase in asthma, preterm births and disabilities associated with diabetes, stroke and chronic obstructive pulmonary disease, according to the report.

Moreover, the report states that 1,400kg of mercury per year is expected to be deposited from coal plants. As much as 320kg of this will be deposited in the immediate vicinity, a massive public health risk to the 100,000 indigenous people living in the project areas. Besides, the report outlines failures of environmental agencies in the environmental impact assessment of coal power plants.

The villagers who face displacement because of the development of a coal-fire power project also complain that they have been given a "very small piece of land" in compensation.

"This happens while they [the relevant authorities] continue to send us eviction notices," said one of them, requesting anonymity. "Some of us have not even received the compensation."

They further claim that a fence has been erected around Thar Block-I, the site for another power plant.

"We are not allowed to enter the area and as a result, we are unable to take our cattle to the pastures located there," the villager said. "Besides, our women and children now have to travel longer distances to get water and collect wood for cooking."

The residents lament that indigenous trees in the area have drowned in the pond of brackish water. They also decry the lack of effective planning to mitigate the effects of development in the area on the environment.