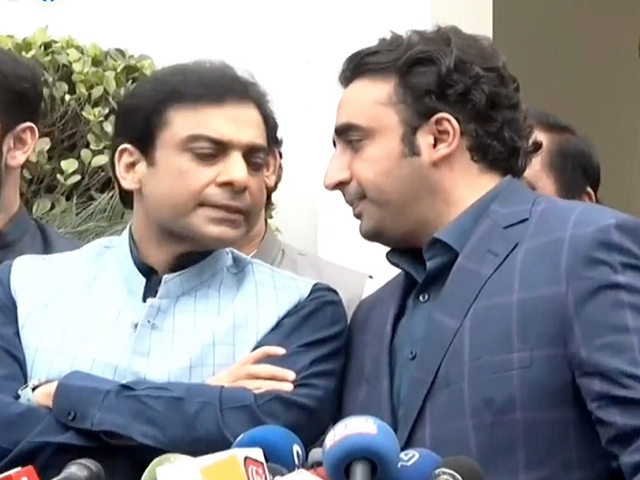 Bilawal and Hamza during the joint presser in Lahore. SCREENGRAB
LAHORE:

Both the PTI-led ruling coalition and the opposition alliance – the Pakistan Democratic Movement (PDM) – on Sunday intensified their efforts to woo their own and rival parties into voting for their candidates for the much-coveted position of Senate chairman.

the constituent parties of the rival group into voting for their respective candidates for the much-coveted position of Senate chairman.

And on Sunday, PPP Chairman Bilawal Bhutto Zardari – whose party leader Yousuf Raza Gilani has been nominated as the PDM’s joint candidate for the slot of Senate chairman – met both with the PML-N leader Hamza Shehbaz and the leaders of the PML-Q, a coalition partner of the PTI.

Bilalwal Bhutto Zardari, who was on a one-day trip to Lahore, first met with Punjab Assembly Leader of Opposition Hamza Shehbaz at his residence in Lahore’s Model Town.

According to Chaudary Manzoor, there were three prime agenda items of the meeting, other than congratulating Hamza on getting a bail – to formally ask the PML-N to support Gilani in polls for Senate chairman; to discuss schedule for the PDM’s March 26 long march to Islamabad and to discuss proposal to bring a no-confidence motion in Punjab Assembly where the PML-N is the second biggest party.

Also read: Change in Punjab on the table as Bilawal meets Hamza over lunch

“During the meeting, the PML-N also presented its own set of suggestions, such as considering toppling the Balochistan government and bringing a no-trust motion against NA speaker. Hamza assured Bilawal that his party will agree with the PDM’s decision on the proposals,” he said.

A source in the PPP claimed that PML-N agreed in principle to the idea of a no confidence motion against Punjab Chief Minister Usman Buzdar, who belongs to the PTI.

Later addressing a joint press conference, Bilawal expressed optimism that the PDM candidate for the Senate chairperson election will emerge victorious as the opposition parties will join forces to challenge the PTI-led ruling coalition.

"We have learnt quite a bit from the last [Senate] chairman election. If we hadn't, we would have lost the National Assembly secret ballot election," he said, referring to Gilani's victory on the Senate seat from Islamabad.

"We won there and it is our full effort that we challenge [the government] together so the win is of the PDM," the PPP chairman added.

Hamza said the PML-N and PPP have learned a lot from the 2006 Charter of Democracy. "We have moved forward with good traditions in the last 10 years. There were mistakes but we have learned from them," he added.

He lamented, however, that in the last three years a culture of "rowdiness, cursing and misbehaviour" have become prevalent. He cited the noisy parliament sessions and the Saturday’s incident outside the parliament where PML-N leaders were allegedly manhandled by the PTI supporters.

According to PML-Q media office, Bilawal and the PML-Q top leaders after having a general meeting in which a number of leaders of both the parties were present also held a more intimate meeting, attended only by Bilawal and three PML-Q leaders – Hussain, Elahi and Tariq Bashir Cheema.

The statement said in this meeting Bilawal sought the PML-Q’s support for Gilani, a request that the Chuadhrys respectfully declined. The PPP source claimed that the meeting was a goodwill gesture on part of the PPP chairman.

He said the purpose of the meeting was also to enquire after the health of Chaudhry Shujaat Hussain. “The PML-Q also agreed in principle with the PPP regarding bringing an in-house change in the Punjab Assembly,” he claimed.

However, PML-Q’s Cheema stated that no proposal to bring a no-confidence motion against Buzdar was discussed in the meeting. “Bilawal sought support for Gilani but the PML-Q refused,” he said.

Cheema said the two sides did discuss issues of farmers, the law and order situation and the economy.  Asked if the PML-Q could consider the option of an in-house change if the PPP chairman proposed it in future, Cheema said it was too early to say anything.

WITH INPUT FROM NEWS DESK