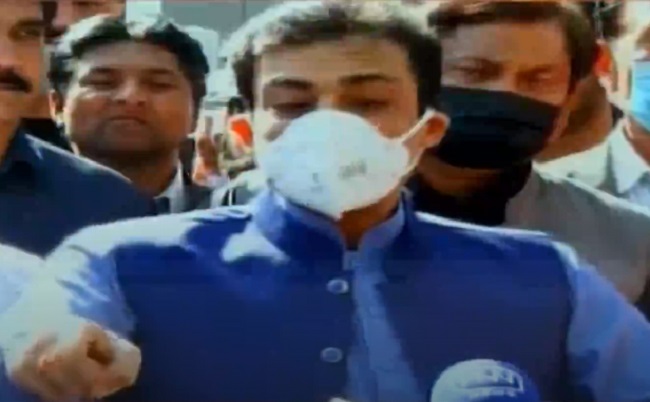 Hasan Murtaza, the PPP parliamentary leader in the Punjab Assembly, said that Hamza Shehbaz has invited Bilawal over lunch at his residence. He added that the PPP chief would congratulate Hamza on his release on bail after 20 months.

Bilawal has recently hinted at bringing a no confidence motion against the Pakistan Tehreek-e-Insaf (PTI) government in Punjab. According to Murtaza, matters relating to a motion might come up for discussion.

According to the PPP leader, Bilawal would be accompanied by senior party leaders, including Qamar Zaman Kaira and Chaudary Manzoor. The PPP media office also said that newly-elected Senator Yusuf Raza Gilani will also be accompanying the PPP chairman.

“Bilawal will congratulate Hamza in person on securing bail in the money laundering case after 20 months. The two leaders will discuss the political situation of the country,” Murtaza said.

“The PPP chairman has already proposed a no confidence motion in Punjab, that’s too will be discussed.”

When asked about naysayers in the PML-N to the idea of a no confidence motion in Punjab, Murtaza said that the aim is to topple the PTI government and “toppling the Punjab government will be the first step in that direction”.

He reminded that previously, other parties in the opposition Pakistan Democratic Movement (PDM) had objections to the proposals for contesting the by-polls and the Senate elections, but “the PPP allayed all their concerns with reasoning and arguments”.

When asked about the viewpoint with in the PML-N regarding fresh elections, Murtaza opined that “if the PDM successfully takes the PTI government down and brings in a national government in its place then going for fresh mandate becomes pointless”.

On the other hand, a PML-N insider said on the condition of anonymity that the party will get the advice from the PPP but it will take its time to discuss the matter with its Supreme Leader and former prime minister Nawaz Sharif.

“With PPP calling shots in the PDM, that’s too successfully, the PML-N will have to pay heed to its [PPP] advice. At this stage the PML-N cannot risk losing the PPP from the PDM,” the PML-N insider said, while responding to a question.

Another PML-N leader termed the idea practical and stressed the party should consider the PPP’s suggestion seriously. She said that it was important to keep the PTI government on its toes. “Even if the attempt is unsuccessful, it will unnerve the PTI government to the advantage of the PDM.

PML-N’s National Assembly Member (MNA) Javeed Latif told The Express Tribune said that his party did not approve of the idea of a no-confidence motion in Punjab. “The only solution to existing problems is fresh elections,” Latif said. for now, he added, the PML-N’s entire focus was on 26 March long march.

“How can any party or the PDM for that matter deliver with a rented mandate in Punjab or at the Centre. Neither in Punjab nor at Centre, would they have the majority to perform assembly business. To approach the public as soon as possible to seek fresh mandate will be the only practice step,” he added.