At least seven bogies of the train derailed suspending traffic on both the tracks; two passengers severely injured 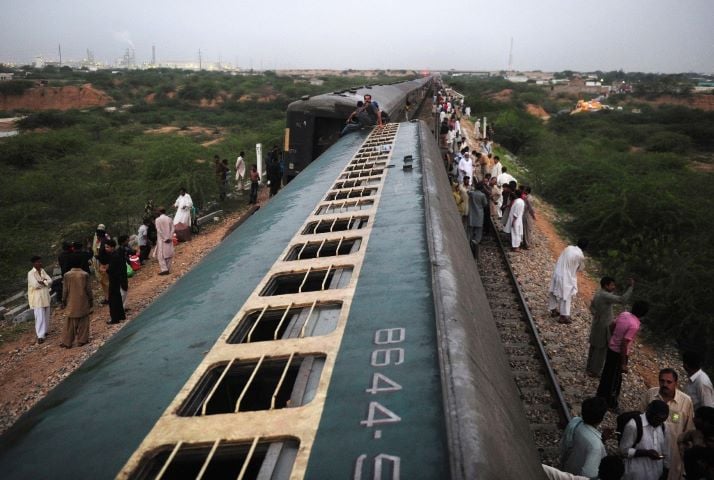 At least one person was killed while 29 others were reportedly injured as Lahore-bound Karachi Express derailed near Pannu Aqil Taluka of Sukkur district on Saturday night.

The deceased was identified as Uzma Bibi, belonging to Karachi's Landhi area. Two passengers are reported to be severely injured in the accident.

The train crashed near Mando Dero Railway station and had at least seven of its bogies derailed. Traffic was consequently suspended on both the up and down tracks.

It was not immediately known what exactly caused the accident. However, railways sources said the railway track is in a dilapidated condition at several places in the Sukkur division.

Army and Rangers troops, along with engineering personnel, were immediately moved to the accident site for rescue and relief efforts. All passengers were said to have been moved to their locations.

Meanwhile, according to sources in the railways, the ticket of the deceased passenger was not issued against her CNIC no.

Following the Tez Gam incident, the railways authorities had directed all DCOs to issue tickets to all passengers against their CNIC numbers.

However, the deceased Uzma Bibi did not have her CNIC number listed against her ticket number.

Pakistan has a shoddy record when it comes to accidents involving trains.

In the past decade, the country witnessed a number of deadly train accidents, and they seem to have increased in frequency over the past few years.

In February last year, at least 19 people died when a train collided with a passenger bus near Rohri – also in the Sukkur division.

In October, 2019 more than 70 people died in a fiery explosion on a moving train near Rahim Yar Khan, Punjab.