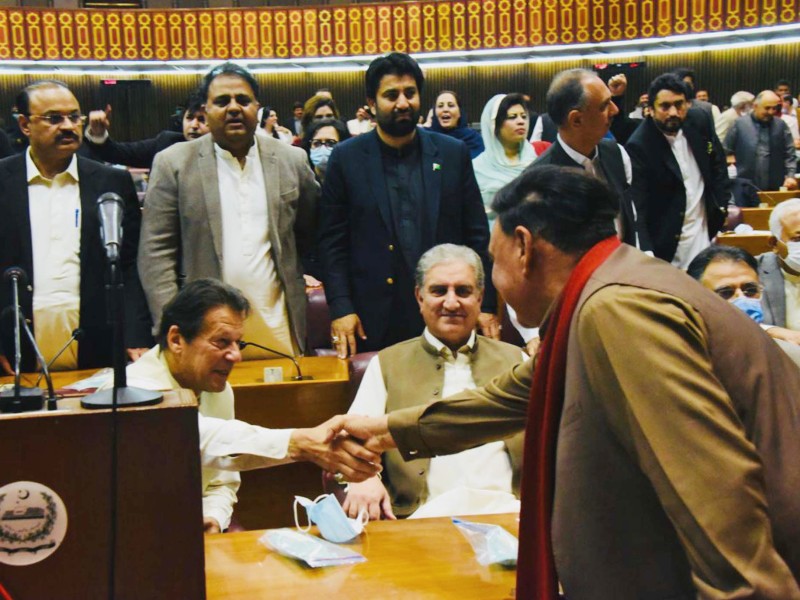 It was a pro-democracy trust moment inside the National Assembly on Saturday, when the coalition partners extended full support to the ruling Pakistan Tehreek-e-Insaf (PTI).

But it wasn’t unconditional; they want to see change now.

They stood united but wanted Prime Minister Imran Khan to address issues confronting the masses, work for real change, bring true democracy in and outside parliament and focus on the salaried-class instead of industrialists.

The past nearly two-and-a-half years were incredibly testing for the government, they said, but the new innings should be played better than the previous one, as time flies when one is in power but days are long when one is in the opposition.

“You are entering into a new political life,” Interior Minister Sheikh Rashid, who is the only member of the Awami Muslim League in National Assembly, said right after the treasury benches reposed their confidence in Prime Minister Imran Khan. “Time flies when one is in power but the days are long when one is in the opposition,” he added.

The house burst into laughter several times during Rashid’s laconic speech, especially, when he said “Tuesday remains Tuesday when one is in the opposition” but, when in power, one keeps asking “what date is it today”.

Calling the premier by his name, Rashid said that two-and-a-half years have already passed; the IMF, the World Bank, Islamic countries have all been seen and God has given him a new political life, adding he should now come forward for the poor as the industrialists and feudal are never with anyone.

“Salaried class is facing a real hard time Mr Prime Minister,” Rashid said, while urging him to give special concessions in the remaining budgets of the ruling party’s term to the downtrodden, the poor and the salaried class without worrying about the IMF, the World Bank and others.

“I am not the kind of minister who believes in buttering,” Rashid said, but added that he has not seen anyone working harder than prime minister Imran. When Speaker Asad Qaiser asked Rashid to take back the word “Malishia” that he used for buttering, Rashid was quick to respond: “For once in life I should also take something back.”

Rashid’s speech brought smiles all around in an otherwise charged session as he was blunt in expressing his opinion and appreciative of the performance of the armed forces under the leadership of Prime Minister Imran.

During Saturday’s session convened for the vote of confidence, the ruling party and its allies made sure that the numbers were complete before the counting process started. As per rules, once the resolution is presented, no one can come inside or go outside the assembly room.

The members were bound to attend on time because any lack of votes would have resulted in the dissolution of the cabinet. From the opposition’s side only Mohsin Dawar was present in the House for a while and he removed all the posters installed on the opposition benches by the ruling party’s members.

Foreign Minister Shah Mehmood Qureshi was seen walking with a stick; another lawmaker was seen taking permission to leave after casting the vote as he had to rush for his son’s wedding; while several others, who were not feeling well, were not allowed to miss the session.

Slogans were raised at frequent intervals and there was no dearth of MNAs wishing to have a photo with the prime minister. The lobbies were packed with chief ministers, senators, special assistants, spokespersons and others. Though they are not allowed to speak, slogans were raised from a certain section, ignoring all warnings.

Siddiqui reminded the premier that including coalition partners’ input in the decision-making was a debt for today’s vote as the allies have fulfilled their promises on time. He said that the allies were not only on the receiving end but the dispensing end as well. “We want you [PM] to tell the nation that change is not merely your slogan but the intention,” Siddiqui said.

Declaring that March was a month to see dreams, the MQM leader said that “if nothing else then let us dream to make this parliament a place where a farmer is represented by a farmer instead of a feudal … a labourer by a labourer and not by an industrialist and let’s make it a house of the people instead of the families.”

He asked the prime minister to begin the journey of change by changing the feudal democracy into a genuine democracy and from the security state to a welfare state. He brought the issue of 100 missing workers of the MQM before the prime minister, saying there shouldn’t be any room for those who make people disappear in a civilised, democratic and Islamic state.

Grand Democratic Alliance’s (GDA) Fehmida Mirza, while making the prime minister realise that allied parties are a big support to any government, said that the grievances would be discussed behind closed doors but for strengthening democracy and continuity of the process, the allies would stand by the government.

Commenting on the Senate elections, horse-trading, government’s efforts to bring transparency and opposition parties’ apparent deviation from the Charter of Democracy, Mirza, said that “no discussion is taking place on 7 proxy votes cast in the Sindh Assembly”.

Mirza, who is the federal minister for inter provincial coordination, questioned why the Charter of Democracy was signed if it was not to be followed, adding that she being the speaker had set the tone for the parliament but it was not the same anymore.