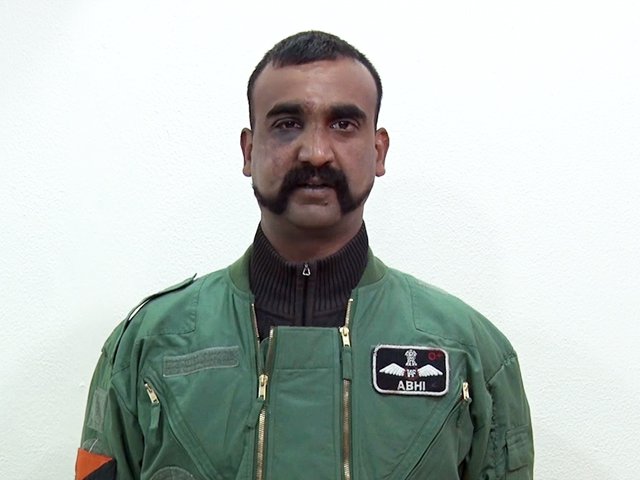 Wing Commander Abhinandan – shot down by Pakistan Air Force (PAF), captured and returned to India after around a day and a half of captivity – said he "sees no reason for us to continue with any kind of hostilities".

The IAF wing commander's statement surfaced in newly released footage, in which he also praises the chivalry of the Pakistan Army.

"I find the Pakistani Army a very fine professional force and very chivalrous. I am very impressed by the chivalry which has been displayed by the Pakistan Army."

The video starts with the IAF officer narrating events after he was forced to bail out, after being shot down by the PAF. "While descending by parachute, I saw both the countries and from my altitude, I did not see any difference between the two countries."

"Both countries are beautiful. When I landed, I did not know whether I am in Pakistan or in my country, India."

He added that not only the two countries but the people also looked the same to him. "I was injured rather badly and I could not move. I then tried to finding out which country I am in, and when I felt that I was not in my country, I tried to run away."

Abhinandan then describes his escape attempt, saying that he was then pursued by locals, whose "passion was running high", and they wanted to catch him.

"At that time, two jawans of the Pakistan Army arrived and saved me. There was a captain of the Pakistan Army who arrived, he saved me from the people and took me to his unit where I was given first aid," said the IAF officer adding that then he was taken to the hospital where he was treated further.

"What is happening with the Kashmiris, neither you nor I know. We need to think calmly."

"I do not know what needs to be done to bring peace, but I know that there should be peace," said the Indian pilot referring to the two countries. "I want peace to be there between the countries."

The DGMO's of Pakistan and India agreed to enforce the ceasefire – which came into effect on February 25 – on the disputed border between the two nuclear-armed neighbours.

The announcement for the ceasefire on the LoC was made simultaneously by both Islamabad and New Delhi after a telephonic conversation between senior military officials of the two countries.

The rare joint statement came against the backdrop of worsening relations between the two countries since the Pulwama incident in February 2019.

The thaw is seen as a major development after years of tensions between the two nuclear-armed neighbours. It also came just days before the second anniversary of the Balakot incident and subsequent retaliation by Pakistan that brought the two countries on the brink of war.

The apparent thaw in ties is being attributed to quiet diplomacy between the two countries.

Observers believe that the Indian government’s willingness to agree to a ceasefire may be linked to its tense standoff with China for months.

Although India and China recently disengaged from Pangong Lake in Ladakh region, tensions still persist between the two countries.

It is believed that India by seeking a reduction in the tension along the LoC wants to concentrate on the Line of Actual Control (LAC) with China.