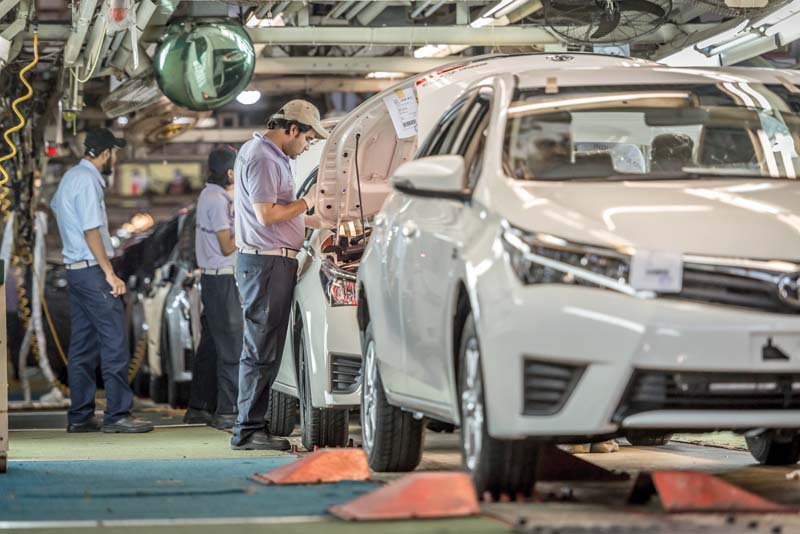 Pakistan is seeing a massive growth in car sales, which amounted to 184,099 units in the 10 months of the ongoing fiscal year with Indus Motor’s share being 52,987. PHOTO: IMC
KARACHI:

Indus Motor Company’s profit soared over 200% to Rs2.96 billion in the quarter ended December 31, 2020 owing to a sharp increase in net sales and other income.

According to a notice sent to the Pakistan Stock Exchange on Friday, the car manufacturer had posted a profit of Rs985.8 million in the corresponding period of previous year.

Alongside the result, the company declared an interim cash dividend of Rs25 per share, taking total dividend for the first half of fiscal year 2020-21 to Rs37 per share. Net sales skyrocketed 106% as they climbed from Rs22.1 billion in October-December 2019 to Rs45.5 billion in OctoberDecember 2020.

“Gross margins settled at 8.19% in the quarter, up by 22bps year-on-year due to rupee appreciation, which wiped off the impact of higher steel prices, together with the change in sales mix from low margin cars to high margin vehicles,” he said in a report.

The analyst elaborated that Fortuner and Hilux sales increased by 200% and 103% respectively.

Distribution expenses of the firm inched up 2% to Rs345.7 million in the OctoberDecember quarter of 2020.

The company had reported Rs337.4 million in distribution expenses in the same quarter of 2019.

“Other income of the company increased on account of a significant jump in shortterm investment (government securities), and cash and bank balances,” Hanif said. Indus Motor Company’s finance cost, however, grew 30.6% to Rs24.2 million during the period under review.

The company had reported finance cost of Rs18.5 million in the same quarter of 2019.

During the day, the share price of Indus Motor Company fell Rs12.69 to close at Rs1,114.61 with 24,060 shares changing hands at the Pakistan Stock Exchange.