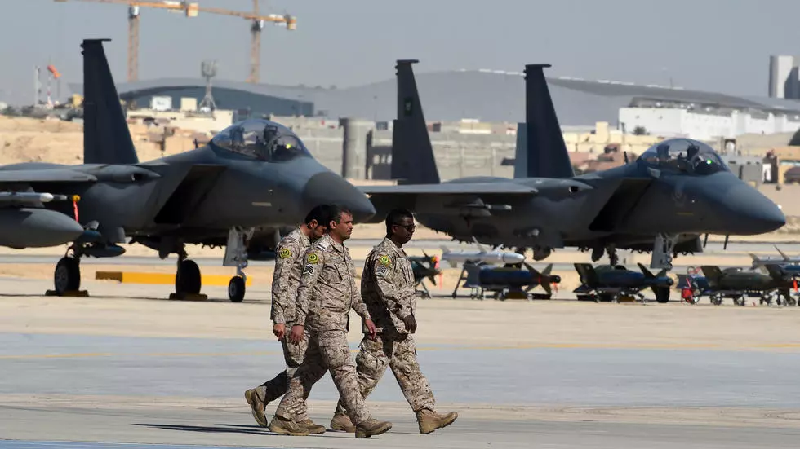 Saudi military officers walk past F-15 fighter jets, GBU bombs and missiles displayed during a ceremony marking the 50th anniversary of the creation of the King Faisal Air Academy at King Salman airbase in Riyadh in 2017. PHOTO: AFP
RIYADH:

Saudi Arabia's state arms producer signed an agreement Sunday with US contractor Lockheed Martin to form a joint venture, a statement said, as Washington reviews weapons sales to the kingdom.

The deal was announced by Saudi Arabian Military Industries (SAMI), which said it will own 51 per cent of the venture, as it seeks to boost the kingdom's military capabilities.

"The joint venture is aimed at developing localisation capabilities through the transfer of technology and knowledge and training of Saudi nationals to manufacture products and provide services to the kingdom's armed forces," SAMI said in a statement.

Saudi Arabia has long been a major global arms importer.

But some Western countries now refuse to sell weapons to the kingdom over its role in the conflict in neighbouring Yemen, gripped by what the United Nations calls the world's worst humanitarian crisis.

Biden's administration also said it was reviewing weapons sales to the kingdom.

"This agreement is in line with Lockheed Martin's strategy to expand its partnership with the kingdom by providing reliable defence and security solutions," Cahill was quoted as saying in the statement.

In 2017, Saudi Arabia's Public Investment Fund set up SAMI to manufacture arms locally, with the fund expecting it to become one of the world's top defence companies by 2030.

Lockheed Martin is among the contractors involved in a project to install a $15 billion Terminal High Altitude Area Defence (THAAD) missile defence system in Saudi Arabia, which was part of a major arms deal approved by former US president Donald Trump in 2017.

Saudi Arabia seeks to boost its defence capabilities as it confronts missile or drone attacks from Yemen's Iran-backed Huthi rebels since it launched a military intervention against them in 2015.