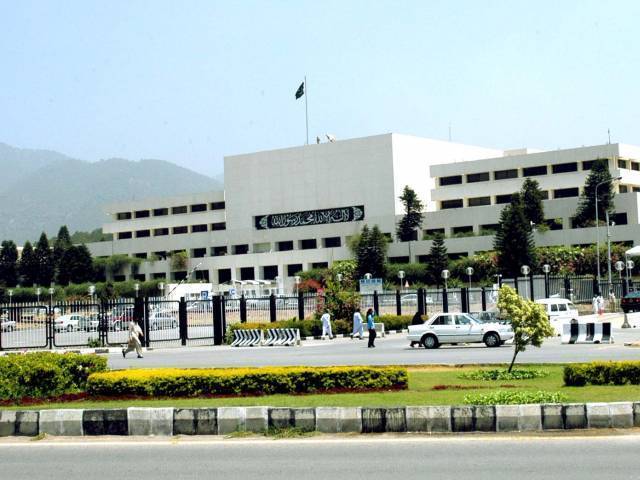 Fireworks are expected in the National Assembly on Friday (today) over the 26th constitutional amendment bill aimed at changing the method of voting in the Senate elections as the House is all set to take up the bill when it resumes legislative business.

The NA speaker had issued notices to three MNAs under Rule 21 (suspension of member) of the Rules of Procedure and Conduct of Business in the National Assembly 2007 after examining the evidence and pursuing record of the proceedings of February 4 — the day when lawmakers used most of their time in the assembly to spew out a nonstop torrent of the most unparliamentary language possible.

Though the speaker had directed the lawmakers to submit reply within a week, the officials at the NA secretariat confirmed to The Express Tribune on Thursday night that no replies have so far been received from the three lawmakers.

They speculated that heated arguments were expected during the assembly proceedings as the members could be suspended for the rest of the session beginning from February 19.

According to the Rule 21(1), the speaker may, if he deems it necessary, name a member who disregarded the authority of the speaker or abuses these rules by consistently and willfully obstructing the business of the assembly.

Second clause of the rule states that if a member is so named by the speaker, he shall forthwith put the question that the member (naming him) be suspended from the service of the assembly for a period not exceeding the remainder of the session provided that the assembly may, at any time, on a motion made, resolve that such suspension be terminated.

Rule 21(3) states that a member suspended under this rule shall forthwith withdraw from the precincts of the assembly.

Declaring the incident as “highly condemnable”, Qaiser noted that he would take appropriate action to maintain the order in the House, saying all members of the assembly belonging to treasury or the opposition benches were under obligation to obey the rules of the National Assembly and to maintain the decorum of the House in order to preserve the sanctity of the prestigious of the House.

On February 4, the usual “chor, daku, corrupt” verbal spat reached to the next level when lawmakers hurled abuses and took part in a brawl that happened near the deputy speaker’s desk.

It all had started when PPP’s Naved Qamar rushed to Deputy Speaker Qasim Suri after he gave floor to three federal ministers – Shah Mahmood Qureshi, Fawad Chaudhry and Asad Umar – one after another without giving a chance to opposition to voice their opinion.

Qamar not just rushed to Suri’s desk but turned his mic on; protested against unfair treatment and finally lifted another mic in his left hand seeing an unfazed deputy speaker, who did not forget to turn his mic off, ignoring him and trying to focus on Umar’s speech.

As other opposition members started gathering around the deputy speaker’s desk, PTI MNA Saifullah, Ataullah and several others also rushed to counter Qamar and others.

The scuffle broke out with shouting and pushing and a couple of lawmakers falling on the floor. Several legislators started separating the angriest among them and finally, Ataullah while crossing the aisle between the leader of the House and the leader of the opposition hurled abuses at opposition.

Hurling insults at each other is nothing new in the House but hearing the loud and clear abuses even forced PML-N’s Murtaza Javed Abbasi to rush to Ataullah’s seat and put his hand on his mouth to reduce its loudness.

The NA session will begin at 11am on Friday (today).

Meanwhile, in a meeting with Senate Chairman Sadiq Sanjrani, the NA speaker stressed that the smooth functioning of the House was the joint responsibility of the treasury as well as the opposition.

He maintained that the people were looking at the Parliament for the resolution of their issues.

Qaiser urged the lawmakers from the government and the opposition to show political maturity during the proceedings of the House and noted that disorder during sessions would not be beneficial for the nation or democracy.

Both the leaders agreed on the running of the House in an amiable manner.