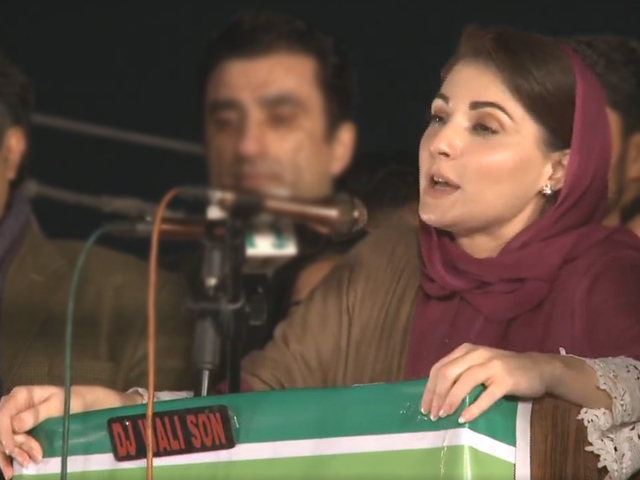 Pakistan Muslim League-Nawaz (PML-N) Vice President Maryam Nawaz has once again come down hard on Prime Minister Imran Khan, saying “he is serving his ‘selectors’ instead of the nation”.

She said this while addressing a public gathering in Sialkot’s Daska town on Saturday ahead of by-polls scheduled to be held on February 19 for the National Assembly seat.

“This is not just an election but a war against those who steal people’s vote,” she said while asking the crowd to vote for his party’s candidate in the upcoming election.

While accusing the prime minister of coming into power through backdoor, Maryam said “he was brought into power to serve the nation but he is busy in serving his selectors”.

The PML-N leader said for the first time in history the people of Punjab have stood up for their rights and refused to bow down to “tyranny”.

“I endured hardships but never left Nawaz’s side,” she added.

She said the incumbent government was working hand in glove with those who minted money out of flour and sugar crises.

“Today people are missing tenure of Nawaz Sharif who ended [power] load-shedding and terrorism from the country,” she said.

“I am very upset that Shehbaz Sharif was taken away from the people of Punjab,” the teary-eyed Maryam said, adding that the people of the province are missing the rule of her uncle as Punjab’s chief minister.

Earlier this month, the Pakistan Peoples Party (PPP) decided to withdraw its candidates from two seats of Punjab in the by-elections in favour of the PML-N candidates.

The decision surfaced as a reciprocal of a ‘goodwill gesture’ of the PML-N which didn’t field its candidates for three provincial seats of the Sindh Assembly.

According to a statement issued by the party, PPP Punjab President Qamar Zaman Kaira maintained the party leadership decided to support the candidates of the PML-N on the National Assembly and the provincial assembly seats of the province, NA-75 Daska (Sialkot) and PP-51 Wazirabad (Gujranwala district).