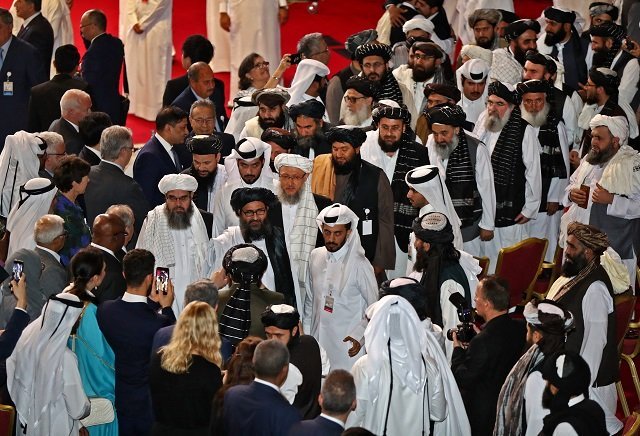 Members of the Taliban delegation arrive to the signing of a US-Taliban landmark agreement in the Qatari capital Doha on February 29, 2020. PHOTO: AFP/FILE
ISLAMABAD:

The Afghan Taliban on Saturday cautioned the US-led NATO forces in the war-torn country not to extend their “occupation” beyond May as the insurgent group categorically denied it violated February 29, 2020 Doha accord.

In a detailed statement issued against the backdrop of reports that the US and NATO forces intend to prolong their stay in Afghanistan and spike in violence, the Taliban listed a number of steps they took to implement the Doha agreement.

The statement came just days before the meeting of NATO defence ministers, where the US would present its plan for the future of Afghanistan. NATO officials earlier indicated that it was unlikely the foreign forces would leave Afghanistan by May 1, deadline set in the Doha agreement for the withdrawal of all international forces.

Similarly, the Biden administration is also reviewing the Taliban-US deal and has given mixed signals. The new US administration insists that the US withdrawal is conditioned based and accused the Taliban of not living up to the agreement. The Afghan government also made similar allegations and blamed the Taliban for the rising violence in the war-torn country.

Responding to the allegations, the Taliban’s Doha office in a statement said the Doha agreement signed after 18 months of intricate and hard negotiations is the sole political roadmap out of the ongoing US-Afghan conflict that no one should treat lightly.

“The Islamic Emirate (Afghan Taliban) on its part is seriously committed to its implementation, has taken effective steps in this regard, and also wants the other side to stringently implement the accord,” the statement said.

The statement further said the American side attests that no foreign trooper had been killed over the past 12 months in Afghanistan, showcasing firm commitment of the Islamic Emirate to the agreement. In a similar fashion and in line with the text of the deal, no entity has taken any steps against the United States of America and its allies from the soil of Afghanistan nor is anyone allowed to do so, and as per the accord, intra-Afghan talks were launched and ceasefire made a topic of the agenda.

“The Islamic Emirate has significantly decreased the level of operations, and in breaking with past practice, no annual spring offensive was announced or launched the previous year. That no district headquarters were conquered in succession like the years past, no numerous and complex attacks targeted the enemy in major cities, nor were plans sketched for the takeover of cities, if this does not constitute a reduction in violence than what does?”

It further said: “This is even before we reach any kind of an agreement with the internal opposition about ending operations against their military personnel. On the other hand, fighting which has occurred is mostly cases where our Mujahideen have been forced to defend their areas, or where the public has been safeguarded from harmful check posts, or where gunmen that extorted passenger vehicles and supply trucks on main highways were suppressed.”

In contrast, the Taliban said, the Kabul administration launched large scale operations in various provinces and in some cases were even provided with air supported by foreign forces. Moreover, raids had been carried out against civilians, American aircrafts were still conducting unwarranted and agreement breaching airstrikes, entire prisoner release process to be completed within three months after launch of intra-Afghan dialogue in line with text of agreement had not been realised, leaders of the Islamic Emirate had not been removed from UN sanctions and rewards lists, warmongering and provocative rhetoric and propaganda by top brass of the Kabul administration continued unabated since the signing of the agreement, they were conducting suspicious attacks against civilian and defenceless targets in cities, and intellectual figures were being assassinated to pin the blame on Mujahideen and create an atmosphere of mistrust, according to the statement.

“All of these actions display the non-commitment of the other side towards the peace process,” the statement said.

The Taliban called on all parties to remain committed to their obligations instead of resorting to “propaganda, provocations, baseless accusations and promoting an atmosphere of distrust”.

“Our faith does not allow us to violate our agreements, therefore no one should be apprehensive about us, rather they should focus on implementing their own commitments.”

The Taliban also conveyed a message for the upcoming NATO defence ministers meeting. “Our message to the upcoming NATO ministerial meeting is that the continuation of occupation and war is neither in your interest nor in the interest of your and our people.

“Anyone seeking extension of wars and occupation will be held liable for it just like the previous two decades,” the statement warned, adding that, “the Afghan Mujahid nation considers defence of their homeland, values and freedom their legitimate right and takes pride in it. Hence, all must avoid misjudging the situation or falling for the trappings of warmongering circles.”