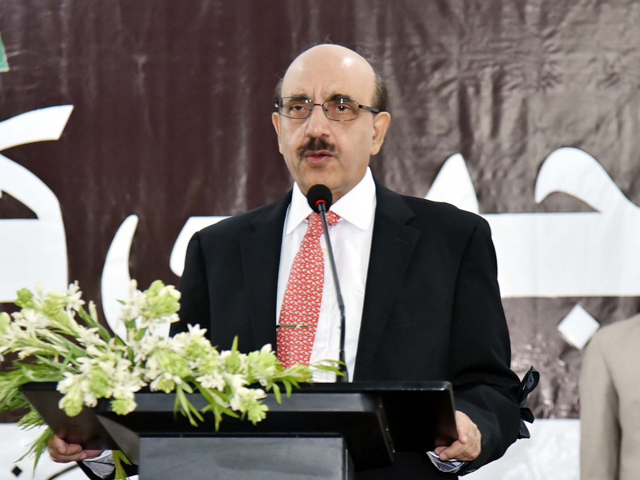 The Azad Jammu and Kashmir (AJK) President Sardar Masood Khan has said that India under a well thought out strategy is erasing everything related to the history of Muslims or the religion of Islam in occupied Jammu and Kashmir.

"The BJP-RSS regime has hinted at building 100,000 Hindu temples and pulling down dozens of mosques which, they falsely claim, had been built after demolishing Hindu temples," he said.

Addressing the participants of Photographic and Cultural Exhibition, titled 'Tribute to Kashmiris Resilience in Their Just Struggle for Right to Self Determination' organized at the Foreign Office; the state's president said that the Indian fanatic rulers were eliminating everything which depicted the religion, culture and the languages of the Muslims in Occupied Jammu and Kashmir.

Terming Kashmir as the land of Sufis and saints, the president said that because of Sufis and mystic’s teachings, Hindus and followers of other religions embraced Islam in Kashmir.

“Islam spread in Kashmir not through conquests but by words and deeds of mystics and saints, whose piety, righteousness, spirituality and care for humanity inspired local population to convert to Islam. No forced conversions,” he asserted.

He said a rich heritage and architecture was brought to and developed in Kashmir, with a legacy of matchless and unique arts, crafts and industries, including carpet, shawl and textile weaving, paper-mache, wood carving, calligraphy and embroidery.

The AJK president said that the Urdu language, which has been spoken and written for centuries in the region, is being replaced with the Hindi language so that the new generation of Kashmiris are cut off from their past.

He lamented that the Indian rulers have become so blind in Islamophobia that they are talking about wiping out the history of the whole subcontinent to write a new history.

President Khan said that in spite of these heinous acts of the Indian government, Hindu temples, religious places and buildings and archaeological sites associated with the history of Hindu religion in Azad Kashmir were protected and preserved.

Saying that efforts are being made by the AJK Government to help preserve the local architecture, culture and heritage, Sardar Masood Khan invited ambassadors of other countries to visit AJK to see its mesmerizing natural beauty and its cultural heritage.