Doctor who was shot by robbers dies after 12 days 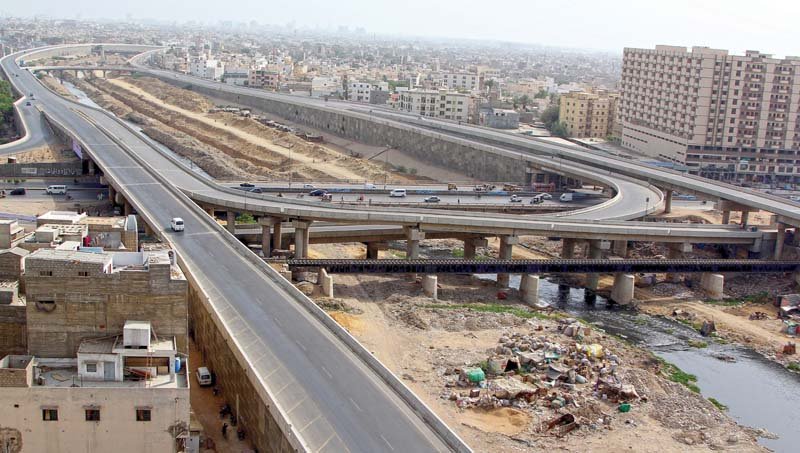 A section of the Lyari Expressway near Civic Centre and Essa Nagri. PHOTO: AYSHA SALEEM/EXPRESS
ISLAMABAD:

Prime Minister Imran Khan on Thursday approved the Nullah Leh project to be completed at an estimated cost of Rs75 billion in two years.

PM also approved changing by-laws to build high-rise buildings along the 15km-long highway along both the banks of the waterway crossing through Rawalpindi. The project besides reducing the traffic congestion will also protect the low-lying areas of the city from urban floods.

The prime minister directed authorities to immediately start work on the project, which has been on papers since 2007.

The approval was given in a meeting regarding the Leh Expressway project chaired by the premier. Interior Minister Sheikh Rasheed and senior officers concerned attended the meeting, while Adviser to the Punjab CM on Development Dr Salman Shah and Punjab Chief Secretary Jawad Rafique Malik joined the meeting virtually.

The prime minister approved the project having an estimated cost of Rs75 billion. The project will be completed in two years.

Under the project, expressway on both sides of Nullah would be completed under the public-private-partnership (PPP) mode. Two shopping plazas would also be constructed along the route.

Addressing the meeting, the premier directed to complete the process of zoning of the adjoining areas and changes in by-laws in few weeks for construction of high-rise buildings and commercial markets on both sides of the expressway.

He added that the redressal of the problems of Rawalpindi was his priority. Premier Imran said that the project would be a milestone in the transformation of the garrison city. The premier was also given a detailed briefing on the Ring Road project and its progress.

Meanwhile, a survey report noted that about 1,600 houses would come in right-of-way while marking for this purpose has been completed. “These 1,600 houses will have to be demolished to make way for the highway,” an official said.

The survey report stated that 1,362 kanals of land will be acquired from people along the banks of Soan River for the Leh Expressway. Of the total area, 1,279 kanals would fall in the jurisdiction of Rawalpindi and 83 kanals would come under Islamabad, the official said.

The official shared that Rs27 billion would be spent on making payments to the people for acquiring their built-up properties whereas about Rs2.5 billion would be the cost of transfer of utility services from the Leh Expressway route.

The Rawalpindi Development Authority (RDA) has approved construction of the Nullah Leh Expressway under the Public-Private Partnership (PPP) and has sent the proposal to PPP Authority Punjab. Its total length will be 16.5 km. It has also approved feasibility study and master planning for special economic zones (SEZs) along Rawalpindi Ring Road project.

The decision was taken at the 52nd meeting of RDA Governing Body chaired by RDA Chairman Tariq Mehmood Murtaza. The meeting was held in the RDA conference room.

Extension in the contractual appointment of staff of the project management unit (PMU) of Rawalpindi Ring Road Project was also approved. The governing body deferred agenda item of the renaming of housing scheme from Rabia Residency to Star Enclave.