A heavy contingent of Islamabad police tear-gassed hundreds of government employees as they attempted to approach the Parliament House to stage a sit-in. PHOTO: EXPRESS
ISLAMABAD:

The federal capital turned into a war zone on Wednesday as the government employees, protesting for a pay rise, clashed with police while attempting to enter the restricted Red Zone – an area where the government and military buildings are located.

Protests were held at different points of the city, including Constitution Avenue, outside Secretariat Block and Cabinet Block. The demonstrators also broke the main entrance door of the Cabinet Block.

The Islamabad police blocked the Srinagar Highway — one of the main arteries of the city — with containers in order to limit the movement of the protestors. However, the move caused a massive traffic jam as many were trying to get back to home from work. 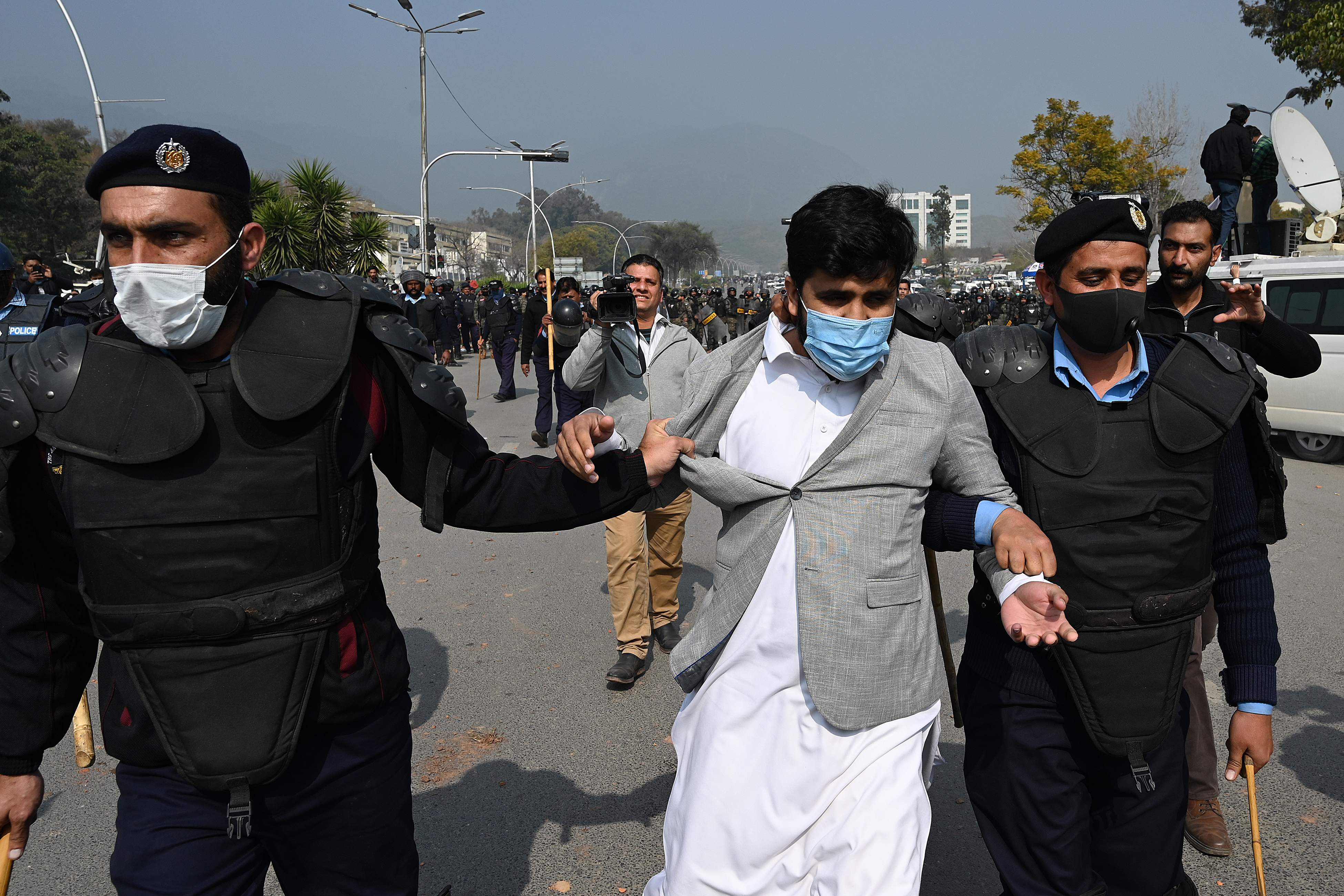 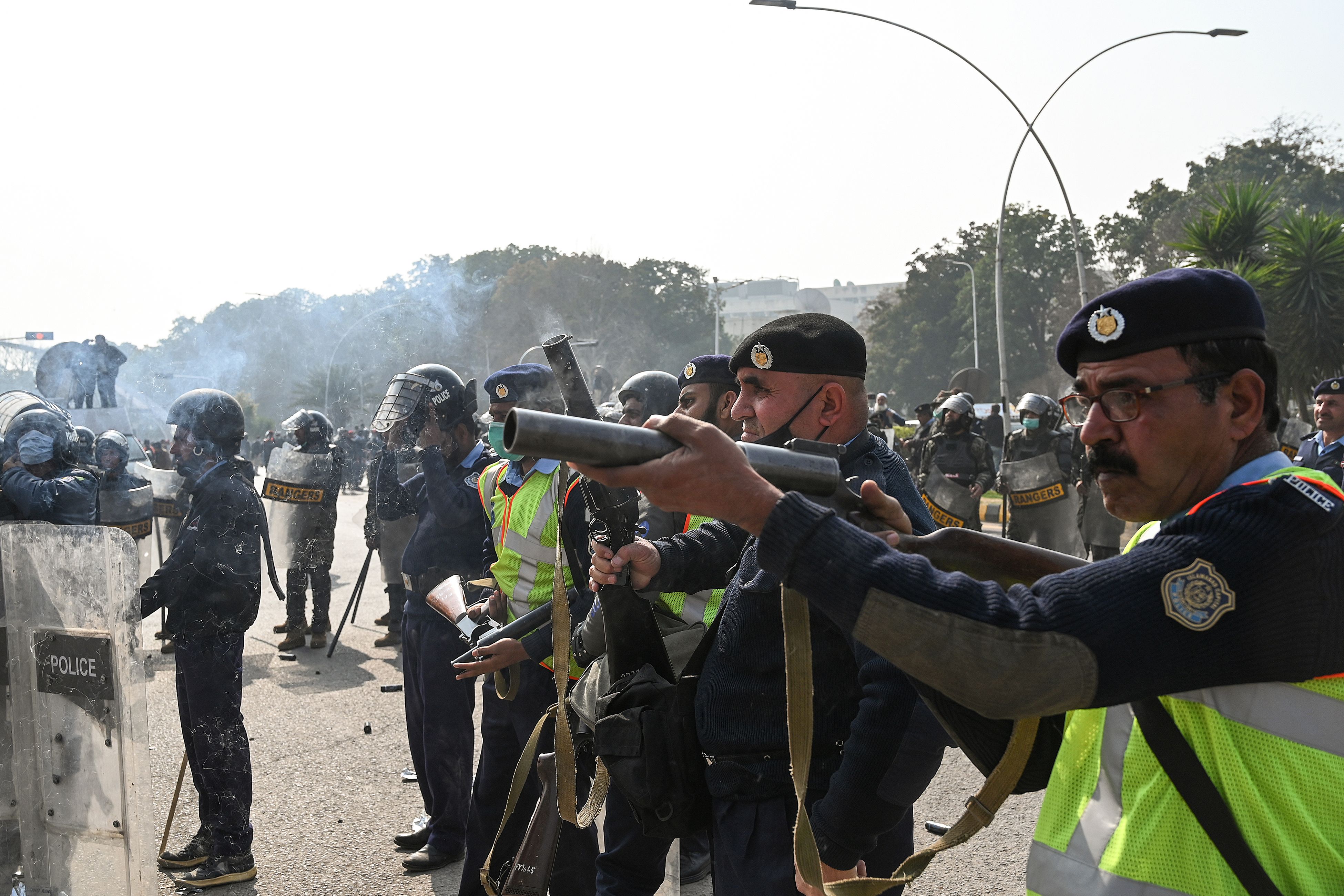 A heavy contingent of police tear-gassed hundreds of government employees as they attempted to approach the Parliament House to stage a sit-in. Dozens of protestors, along with their leaders, were also arrested.

The protesters could also be seen pelting the police officials with stones in return.

Following the ruckus, a group of protesting employees apparently belonging to the Cabinet Division intercepted the Minister for Information Senator Shibli Faraz's vehicle as it was entering the office of the information ministry, and demanded the immediate release of all the arrested leaders.

The employees, who had been asking for a raise in their salaries for the past several months, had announced that they would launch a forceful protest along with the provincial government employees on Wednesday after bringing the government affairs to a halt.

On Tuesday night, police conducted raids at the houses of central officer-bearers of government employees’ organisations and took them into custody.

Earlier, employees of the Federal Directorate of Education had reportedly blocked the main Srinagar Highway, resulting in gridlock on both the tracks of the highway as well as affecting the traffic in the rest of the city.

The strike brought government affairs in ministries, departments, and divisions to a standstill.

Employees belonging to many government ministries including the Secretariat, Cabinet Division and Kohsar Complex had all refused to go to the office, resulting in the closure of government offices. 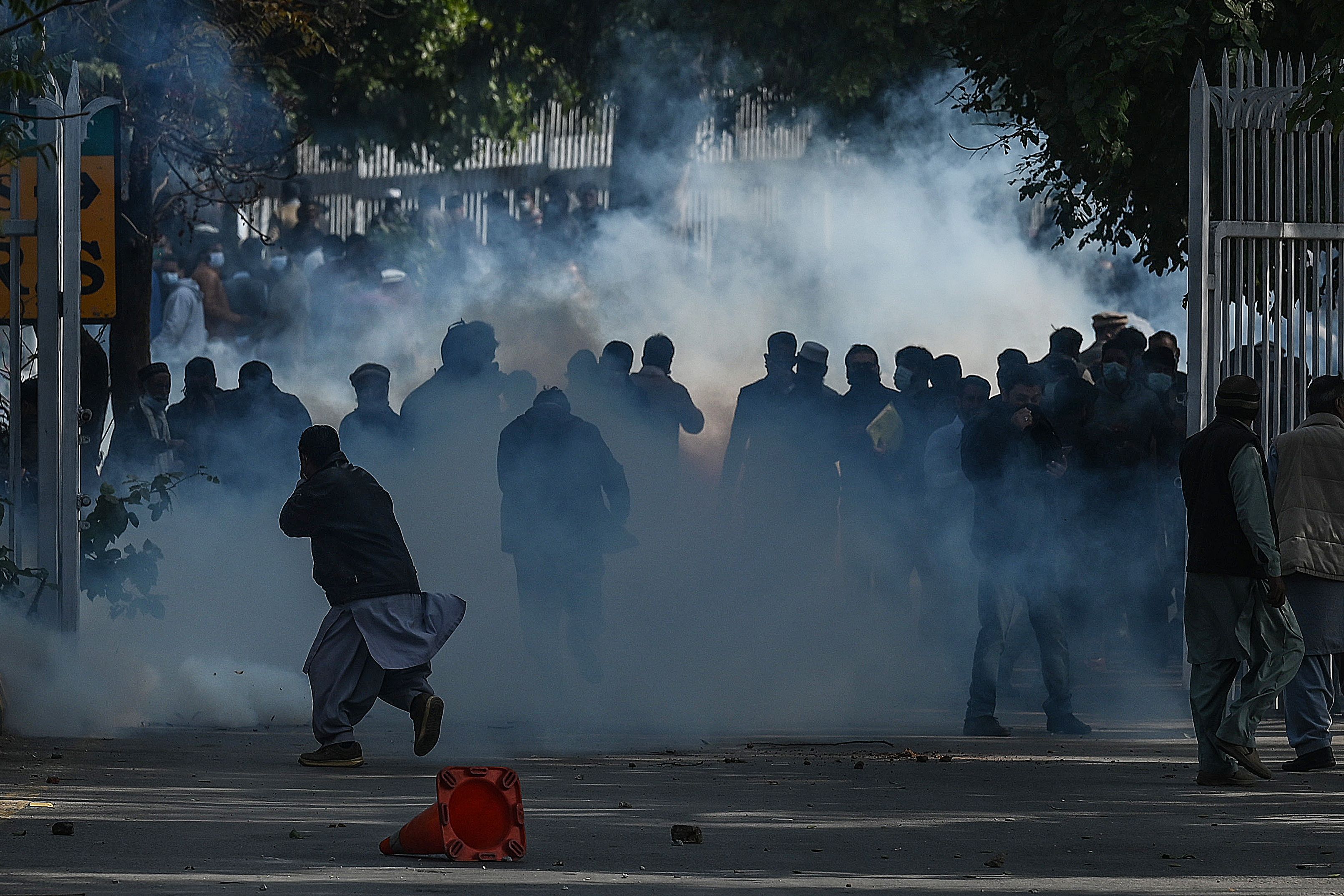 Pakistan Muslim League-Nawaz (PML-N) Vice President Maryam Nawaz, while referring to the incumbent ruler, said that the one who staged a 126-day sit-in in Islamabad could not stand the legitimate protest of government employees.

“Fake rulers should inflict as much harm as they can themselves withstand,” Maryam said, adding that resorting to violence and firing tear gas shells on protesting employees were the “cruel” tactics employed by the incumbent government.

“The sacrifices being rendered by the employees actually signal an end to the oppressive, anti-public, vote-thief and commission-fed government,” she remarked.

Maryam noted that thrashing employees who were only putting forth their rightful demand, including that of a pay raise, is a sign of “tyrant” leaders.

“The whole nation has now seen the fascist and dictatorial face of the claimant of Western democracy,” the PML-N leader lamented.

She said the government was suppressing the people who have been under the debt of inflation for the past three years. “It is the first government that, despite causing inflation to rise fourfold, did not raise salaries of government employees by even a single rupee,” she maintained.

Maryam vowed to raise her voice for the employees and highlight the ill-treatment meted out to them at parliament and all other forums. She demanded the government to immediately release all the arrested employees.