International Criminal Court rules it has jurisdiction over Palestinian Territories

CM, others call on int’l community to play its role in ridding IIOJK of Indian atrocities 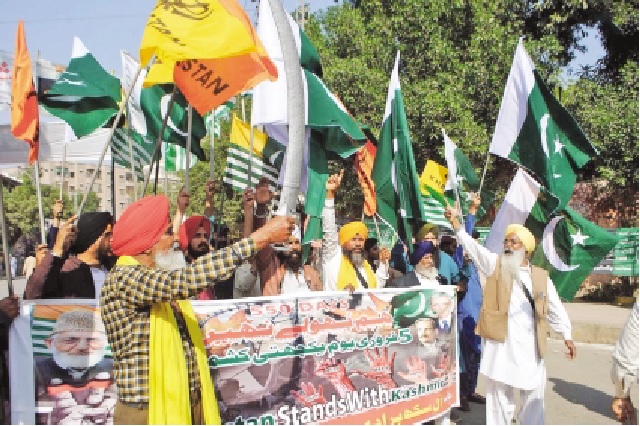 Scores of people across Sindh voiced their unflinching support for the people of Indian Illegally Occupied Jammu and Kashmir (IIOJK) on Friday, as they came out on the streets, holding demonstrations and rallies to mark Kashmir Day. PHOTOS: EXPRESS/NNI/ONLINE
KARACHI/HYDERABAD:

Scores of people across Sindh voice their unflinching support for the people of Indian Illegally Occupied Jammu and Kashmir (IIOJK) on Friday, as they came out on the streets, holding demonstrations and rallies to mark Kashmir Day.

Hundreds of rallies were taken out in different cities of the province on the day.

Sindh Chief Minister Syed Murad Ali Shah, who was speaking to the media after leading a rally from Peoples Chowrangi to Mazare-e- Quaid, said on the occasion, "Indian authorities have imposed the longest curfew in the history of IIOJK in a blatant violation of human rights."

Murad said this was enough to awaken the conscience of the international community and human rights organisations, urging them to play their part in liberating IIOJK of Indian atrocities.

The CM further stated that holding events to highlight the plight of the people of IIOJK was a good step, adding, "But we will have to make some tangible efforts on diplomatic front to force India to restore the status of Kashmir, lift curfew from the valley and allow plebiscite, as was decided by the United Nations (UN)."

Directing criticism towards the Pakistan Tehreek-e-Insaf (PTI)-led federal government, the CM said, "All the previous governments in Pakistan kept the Kashmir issue alive but the present government has failed to follow the course."

He then added "[But] setting aside all political differences, we, as a nation, will have to unite on a single agenda to liberate the people of IIOJK from the clutches of Indian government."

He deemed the atrocities unleashed in the valley a threat to the regional peace.

Separately, Sindh Information Minister Syed Nasir Hussain Shah addressed a Kashmir solidarity rally at Frere Hall, where he said, "Today, the entire nation has put their political differences aside and stands united with their Kashmiri brothers and sisters in their struggle for freedom."

He too called for the intervention of the international community on the issue.

Addressing another rally, PTI leader Khurram Sher Zaman maintained that Prime Minister Imran Khan had been raising the Kashmir issue on different international platforms for the past three years and now it was being discussed across the world.

Meanwhile, the Pakistan Maritime Security Agency organised an event on its ship Dasht, which was adorned with the Pakistani and Kashmiri flag and was set sail in the sea.

Meanwhile, Hyderabad commissioner and deputy commissioner (DC) took out a rally from Shahbaz Building to the post office in Hyderabad.

Speaking on the occasion, Hyderabad commissioner Muhammad Abbass Baloch said, "We want to remind the world that the UN has a role to play in the implementation of [its] resolutions on Kashmir."

"We call on all world powers to play their role in giving Kashmiris their right to self-determination," he added.

He added that Pakistanis would not shy away from offering any sacrifice for winning freedom for the oppressed people IIOJK.

"The Indian atrocities have crossed all limits. Soon more Pakistans will be carved out of India," said MQM-P MNA Sabir Hussain Qaimkhani.

The Jamaat-e-Islami, Pakistan Muslim League-Functional, Pakistan Sunni Tehreek, Majlise-Wahdatul Muslimeen and other political and religious groups also organised demonstrations across Sindh. Besides, a basketball tournament was organised at Sindh Agriculture University, Tandojam, to mark the day.

Moreover, the Jamshoro district administration and the education department took out a joint rally in the district, in which the local business community also participated.

Events in relevance to the day were also held The Mehran University of Engineering and Technology, University of Sindh and Liaquat University of Medical and Health Sciences in Jamshoro district.