Indian farmers to scale up protests as Rihanna weighs in

Police have since erected barricades around three main protest sites and shut off the internet in some areas. 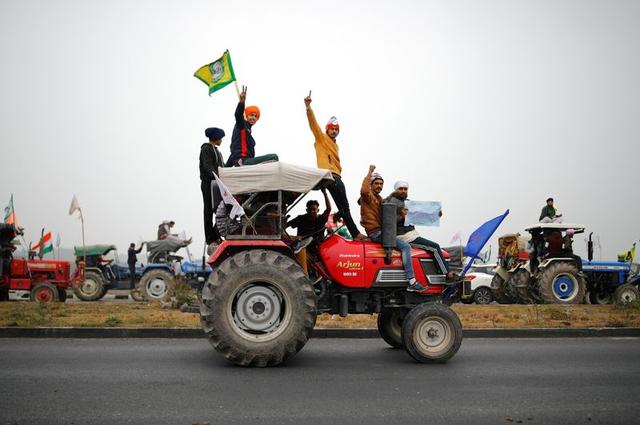 Farmers participate in a tractor rally to protest against the newly passed farm bills at Singhu border near New Delhi, India, January 7, 2021. REUTERS

Indian farmers’ leaders on Wednesday outlined plans to scale up months of protests against agricultural reforms, as their cause gained high-profile supporters in the West.

Demanding the repeal of three new farm laws that they say will hurt them to the benefit of large corporations, tens of thousands of farmers have been camped on the outskirts of Delhi since late 2020.

Their generally peaceful protest was marred by violence last week, when some demonstrators drove a procession of tractors into the heart of the capital and clashed with police.

Police have since erected barricades around three main protest sites and shut off the internet in some areas.

Farmers’ leaders, speaking hours after US pop superstar Rihanna weighed into the row in a posting to her 101 million Twitter followers, said they would not back down.

“This gathering shows the anger against the government and we will continue our fight,” union leader Rakesh Tikait told a 50,000-strong rally of the politically influential Jat community in northern Haryana state.

He and other leaders said they would send more farmers to the Delhi protest sites and hold similar meetings across the country to gather further support.

Rakesh Singh Vidhuri, a farmer from the neighbouring state of Punjab, the epicentre of the protests, who attended Wednesday’s meeting, said the movement was bringing together growers from across India’s northern breadbasket region.

“The protests have spread because these laws will impact the livelihood of farmers and Indian agriculture overall,” he told Reuters.

The farmers say the reforms, which will allow big retailers to buy directly from growers, will mean the end of long-standing guaranteed prices for their crops and leave them vulnerable to the whims of big business.

The government of Prime Minister Narendra Modi, which has offered some concessions but ruled out abandoning them, says they will benefit farmers and draw investment to a sector that makes up nearly 15% of India’s $2.9 trillion economy and employs about half its workforce.

“We ALL should be outraged by India’s internet shutdowns and paramilitary violence against farmer protesters,” U.S. lawyer and activist Meena Harris, a niece of Vice-President Kamala Harris, said on Twitter.

Greta Thunberg shared a news report about the internet shutdowns. “We stand in solidarity with the #FarmersProtest in India,” the Swedish climate activist wrote on Twitter.

Hours earlier, Rihanna had shared a CNN article on the demonstrations and asked her Twitter followers under the same hashtag: “Why aren’t we talking about this?!”

The foreign ministry labelled the comments “neither accurate nor responsible”.

“A very small section of farmers” had issues with the new laws and some groups had tried to mobilise international support against India.

“Before rushing to comment on such matters, we would urge that the facts be ascertained, and a proper understanding of the issues at hand be undertaken,” the ministry said.