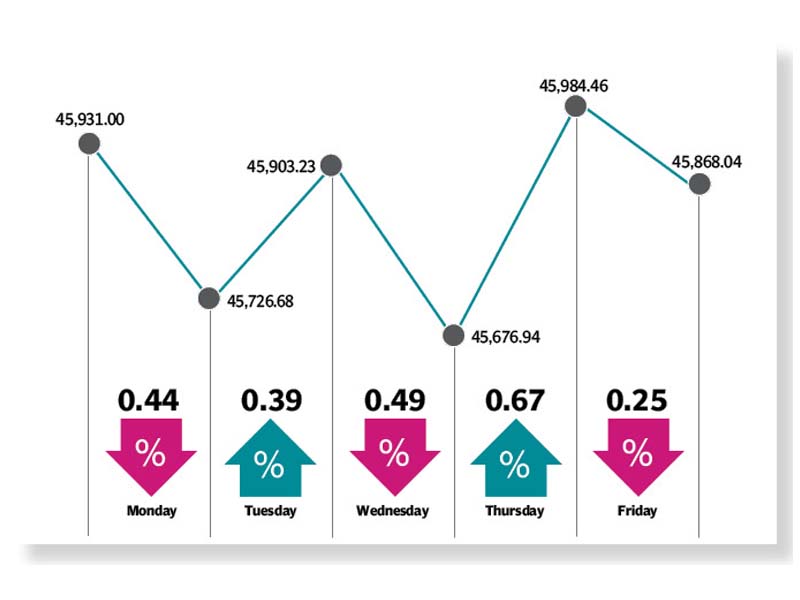 Following an impressive three-week winning streak, the Pakistan Stock Exchange (PSX) endured a relatively volatile week. The benchmark index succumbed to selling pressure and posted a meagre loss of 63 points or 0.1% in the outgoing week to settle at 45,868.04.

Volatility marred trading as pessimistic news flow sparked panic selling and market participants offloaded stocks. A few attempts were made to recoup losses, however, they proved futile as three out of five sessions closed in the red during the week.

The week commenced on a negative note, as participants at the local bourse reacted negatively to the news of revival of the International Monetary Fund (IMF) loan programme and a slump in international oil prices. The index slipped as concerns over economic uncertainties dented investor sentiments.

Tuesday saw a turn of events and the index advanced despite unimpressive foreign direct investment (FDI) data released by the State Bank of Pakistan (SBP) late on Monday.

The overall momentum at the bourse during the session remained positive as the automobile sector outshined and notched up handsome gains.

Unfortunately, bears stage a comeback on Wednesday, as the KSE-100 index juggled between the red and green zone. Market participants chose to remain on the sidelines due to redemption of mutual funds coupled with concerns regarding the monetary policy announcement.

However, the trend changed as the local market took cues from a rise in regional and global stock markets, which cheered the inauguration of Joe Biden as the 46th US president.

Furthermore, market hopes of a status quo in the monetary policy and overall optimism at the bourse lifted the index close to the 46,000-point mark on Thursday. Participants remained undeterred as they made fresh investment, despite the current account turning negative once again in December 2020, as reported by the central bank late on Wednesday.

Nevertheless, the bourse once again succumbed to selling pressure on Friday as the news of a power tariff hike of Rs1.95 per unit on Thursday took its toll on the market.

The news of central bank leaving the benchmark policy rate unchanged at 7% for the next two months coupled with positive performance of the global and regional equity markets eroded some of the mid-day losses, however, the index still closed the week in the red.

Foreigners accumulated stocks worth $5.51 million compared to a net sell of $2.1 million last week. Buying was witnessed in technology and communication ($3.24 million) and power generation and distribution ($2.43 million). On the domestic front, major selling was reported by mutual funds ($19.9 million and broker proprietary trading ($7.46 million).

Among other major news of the week was; textile exports in December 2020 reached historic high, cabinet committee on energy approved to discontinue gas supply to captive power plants from February 1, 2021, and foreign reserves with the SBP declined by $386 million to $13 billion.