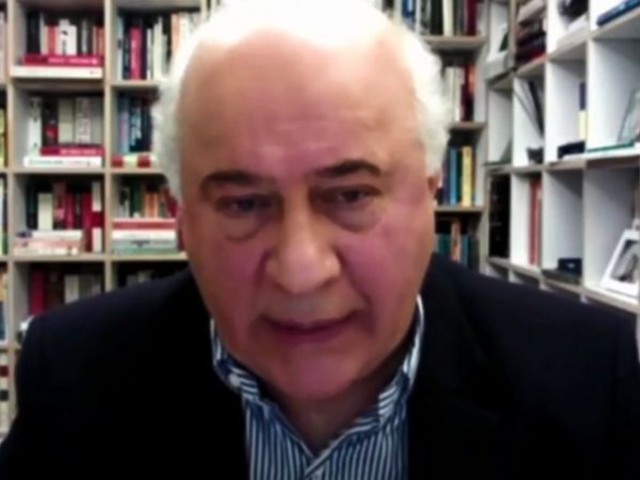 Broadsheet LLC Chief Executive Officer (CEO) Kaveh Moussavi has said that he had "voluntarily" identified a suspicious bank account in the United Kingdom having an amount of $1 billion but the government of Pakistan has not shown any interest in tracing it.

Responding to a question in an interview with BBC Urdu on Friday, he said that the government of Prime Minister Imran Khan knows whom the suspicious account belonged to. However, he stayed short of revealing the identity during the interview.

The Broadsheet CEO said that he was in talks with the government to offer his services in tracing the assets of Pakistani political figures abroad. However, he alleged that a representative of the incumbent government talked about "commission" – a term often used in the subcontinent for kickback – for himself upon identifying the bank account.

He said that if an agreement is reached, he can "hand over the evidence collected against the Sharif family to the Pakistani government."

'Musharraf was interested in tracing assets of Nawaz, Benazir and Zardari only'

According to Moussavi, former president and Chief of Army Staff General (retd) Pervez Musharraf was particularly interested in tracing the overseas assets of Nawaz Sharif, Benazir Bhutto and Asif Ali Zardari so the money allegedly looted from Pakistan could be brought back.

"But we did not want to be part of any political victimisation that Musharraf was trying to do at the time. So we made it clear that we would not go only after these three personalities."

He said that an agreement was reached with the National Accountability Bureau (NAB) and the Pakistani government and he was handed over a list of 200 people, including these three figures.

As per the agreement, Moussavi said, the NAB was to provide him with the required documents on the basis of which Broadsheet was to trace the alleged corruption amount kept by these individuals abroad and also provide evidence to help bring the money back to Pakistan.

"The NAB told us that we don't have funds. You should spend the money, trace the assets of these people, help us recover the stolen money and we will give you a 20% commission of that recovered amount," he claimed.

What did Broadsheet find against the Sharif family?

Moussavi said that they were tracing down the alleged embezzled money of Nawaz Sharif and had allegedly obtained relevant evidence from several bank accounts, many of which had been frozen.

The Broadsheet CEO revealed that before he could start the process of freezing the identified bank accounts, he was fraudulently removed from the task.

It is pertinent to mention here that NAB had terminated its contract with Broadsheet in 2003.

Moussavi said that NAB had taken the stance that Broadsheet had not achieved the desired targets. However, according to him, the reality was contrary to NAB's position.

"In fact, we had traced down and provided evidence to NAB of several bank accounts having millions of dollars. We had also asked them to file a written request to the relevant governments to recover the money," he added.

He claimed that Broadsheet had traced and informed NAB about a bank account belonging to former interior minister Aftab Khan Sherpao having an amount of $100,000 in New Jersey, United States and had also asked NAB to write to authorities in the US state so that the money could be brought back to Pakistan.

"Do you know what the NAB did? Without taking us into confidence, they wrote to the authorities that we have no problem with this account so it should be reopened. The money was then withdrawn and Sherpao was made interior minister."

Moussavi alleged that NAB also leaked classified information about the pursuit of targets.

"When we went after a target, we found out that he had already withdrawn the money from the account and closed it because someone inside the NAB had already warned him that we were going after him."

Why did Moussavi accuse the Sharif family of bribery?

The Broadsheet CEO asserted that a man named Anjum Dar approached him in 2012 and identified himself as Nawaz Sharif's nephew. "The man said he wanted to talk about the information we have against the Sharif family."

Moussavi alleged that during the meeting, the man offered $25 million for not disclosing information and evidence regarding the Sharif family's assets, which he turned down, saying that any such amount should be offered through a conciliatory court.

When asked why the Sharif family contacted him about ten years after the completion of his investigation in 2003, Moussavi said: "The Sharif family knew that when the matter would be brought before the court, the judge would get down to the bottom of the matter and thus once again the case of their alleged corruption will come to light which they did not want."

'Someone from NAB provided information to Sharif family'

He alleged that the bad intentions of NAB and Pakistan government were clear from day one. "While we were searching for Nawaz Sharif's wealth abroad, Musharraf put him on a plane and sent him to Saudi Arabia," he added.

Moussavi said he had reiterated his intention to work with the Pakistani government in 2018 during the talks to reduce the compensation amount. However, few people involved in the negotiations wanted to get their ‘cut’ as well. "We will get you a new contract but how much we will get," he quoted unnamed official as saying. He said that all talks immediately came to a halt afterwards.

"We told them that we will forget about the compensation amount... let's work on it again. We had also drafted the agreement but few elements from within Imran Khan's government once again sabotaged the effort," he alleged but added that he was still in talks with the government to resume work.

Pakistani representative asking for 'commission' is not Shehzad Akbar: Moussavi

Moussavi said that during a meeting in a London cafe in 2019, he told the representatives of the Pakistani government about a suspected bank amount having an amount of $1 billion. However, one of the representatives, he said, asked him how much "commission" he would get out of the deal.

Recently, some opposition parties in Pakistan have accused Adviser to Prime Minister on Accountability Barrister Shehzad Akbar for being this representative. However, Moussavi clarified that this person was not Shehzad Akbar.

"I know Imran Khan," he said and added that he's an honest man and seemed to be serious about it [ongoing accountability drive] as well. "However, I don't know if he is capable to do this job. I'm not very optimistic after recent experience with the people in his government."

He said he would only agree to work with the Pakistani government if he was convinced that the "corrupt elements within the NAB have been expelled and the government was serious about bringing back the looted wealth of Pakistan."