Scores of fish ‘killed by poisoning’ in Sukkur Barrage canals 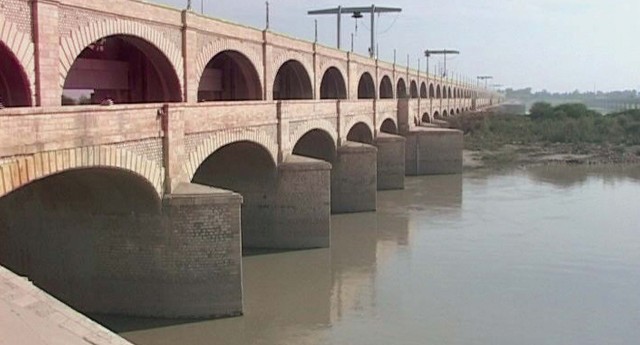 The killings of scores of aquatic animals in Sukkur Barrage’s water channels have been reported since the barrage’s closure on January 6, 2020.

Amid the reports of killings by poisoning, the Sindh Livestock and Fisheries Department, Sindh Wildlife Department (SWD) and the provincial irrigation department have come under fire for not taking appropriate measures to curb the practice of contaminating water in Sukkur Barrage’s canals with poison and catching dead fish.

“Despite their tall claims [of curbing the offence], the practice continues,” a government official told The Express Tribune on the condition of anonymity.

According to him, similar incidents of killings were reported last year too.

Poisoning water channels to catch fish is a common practice in the region. Those looking for the catch find it convenient to pull out big fish from the water after the aquatic animals are dead and their corpses float to the surface.

However, it not only contaminates water, but also kills aquatic animals apart from fish.

When asked, Sukkur fisheries regional director, Zulfiqar Ali Larik, admitted that the killing of aquatic animals by tipping poison in the barrage’s water channels was a common practice in the past.

He, however, added that this time around, all areas were being strictly monitored.

“We have deployed staff to prevent people from poisoning the water,” he claimed. “We have been very strict this time around.”

He added that “hundreds of fishermen” could be seen fishing at various spots, albeit clarifying that he was not aware whether they had poisoned water channels.

“But the practice is common here,” he remarked.

Similarly, an area resident, Yaseen was of the view that bringing the criminal practice to an end was too big a challenge for the government.

“I don’t see anyone having been arrested [for the offence] so far,” he said, opining that the law was too weak to put an end to the practice.

However, Larik maintained that not a single case of the offence has been reported since 2018.

The Sukkur Barrage command area has been closed for the purpose of annual maintenance and repair and will be reopened on January 20.

Section 9 of the new law declares the poisoning of water a crime and a non-bailable offence.

According to Larik, if a person is found guilty of the offence, a fine of maximum Rs10,000 could be imposed on him.

“If a person is found guilty of the offence for the first time, he is let off after signing an affidavit. A case is registered only after a person repeats the offence,” he further explained.

Explaining the importance of keeping people from contaminating water channels of Sukkur Barrage with poison, SWD head Javed Ahmed Mahar said, “These [the water channels] are the main habitats of turtles and [blind] Indus dolphins.”

“The officials of the SWD are visiting the area and asking local people to abstain from poisoning the water and causing harm to dolphins,” he added.

Meanwhile, some officials were seen distributing pamphlets among villagers and fishermen on Saturday, appealing to them to not poison water channels.

Moreover, Mahar said villagers in the area had also been requested to inform the SWD if they came across any stranded dolphins in the water channels.

“We are trying to sensitise local fishermen and I hope the practice will be discouraged now,” Mahar added.

He also appreciated the role of irrigation department officials.

“They helped us in rescuing scores of turtles [from the water channels] last year,” he said.