Iran resumes 20% enrichment at Fordow amid rising tensions with US

The vaccine challenge ahead

Hazaras refuse to call off sit-in over Machh massacre 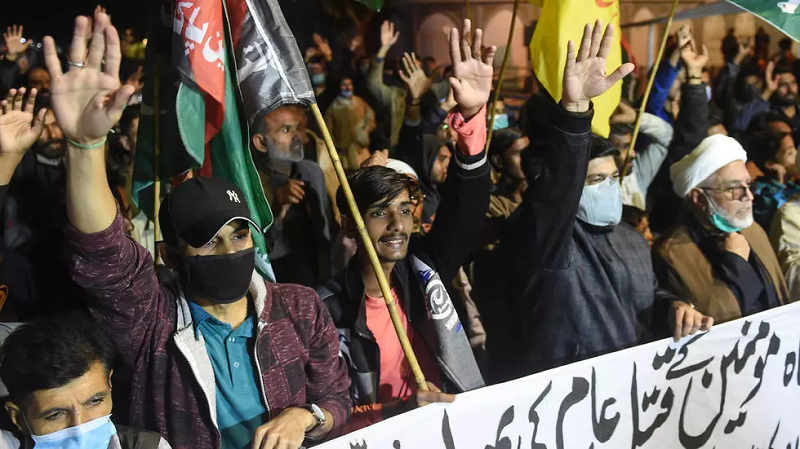 Up to 2,500 protesters gathered with eight of the bodies in coffins and blocked a bypass on the outskirts of Quetta. PHOTO: AFP
QUETTA:

Thousands of Hazara community members continued their sit-in on the Western Bypass in the Balochistan capital on Monday night, demanding justice over the massacre of 11 colliers in Machh, as the late-night talks between Interior Minister Sheikh Rashid and the protest leaders failed.

Rashid met a delegation of the Majlis-e-Wahdatul Muslimeen (MWM), who are leading the sit-in, in Quetta. However, the protesters refused to end their sit-in until Prime Minister Imran Khan visited them.

Rashid dashed to Quetta in the evening. Earlier, he held telephonic conversation with the MWM leader Allama Raja Nasir Abbas Jafri and offered his condolences over the killing of Hazara community members.

Talking to reporters after the meeting with protest leaders, Rashid said that he had asked the MWM to form a five-to-seven-member committee to meet with Prime Minister Imran Khan in Islamabad. “I will arrange the meeting within two-three days,” he said.

The minister said that that he would convey the demands of the Hazara community to the prime minister. He announced payment of Rs2.5 million compensation – Rs1.5 million of which would be paid by the Balochistan government – to the heirs of each victim.

Rashid assured that those involved in the killing of the coal miners would be brought to justice. “I feel very sad over which had happened in Machh, the other day,” he said. “The people of Hazara community are great, who despite such terrorist attacks, were loyal to the country,” he added.

The interior minister also received a briefing from the chief secretary and other officials about the Machh incident and the ongoing sit-in. In view of the briefing and tragic Machh incident some important decisions were taken in the meeting.

Meanwhile, the capital city and other parts of Balochistan were in mourning over the terrorist attack in the Machh, while thousands of relatives of the slain colliers, along with other residents of Hazara Town, staged a sit-in, placing the coffins of the victims on the Western Bypass.

The tragic incident took place at Gushtri area of Machh, 80 kilometres from Quetta, where unidentified militants attacked coal-miners, while they were in their quarters on Sunday. The assailants separated 11 men and killed them with a sharp weapon.

A security official told AFP that two of the miners were Afghans and their bodies had been sent to Afghanistan for burial. The rest belonged to the Hazara community. The attack was later claimed by the Islamic State group, which also goes by the name of Da’esh.

Sources said that 35 hour delay was caused because there were differences among the law-enforcement authorities – police and the Levies force – regarding jurisdiction. However, no arrest had been made in the case, so far.

Balochistan government spokesman Liaqat Shahwani said that the security forces had cordoned off the area, immediately after the incident and launched a search operation. “The province is facing a new wave of terrorism,” Shahwani said. However, he added the accused would be nabbed soon.

On the other hand, on the call of Balochistan Bar Council against the tragedy, all lawyers' organisations boycotted the court proceedings across the province on Monday.

(WITH INPUT FROM AFP)