Seven of a family die as van, bus ram into each other near Narang Mandi 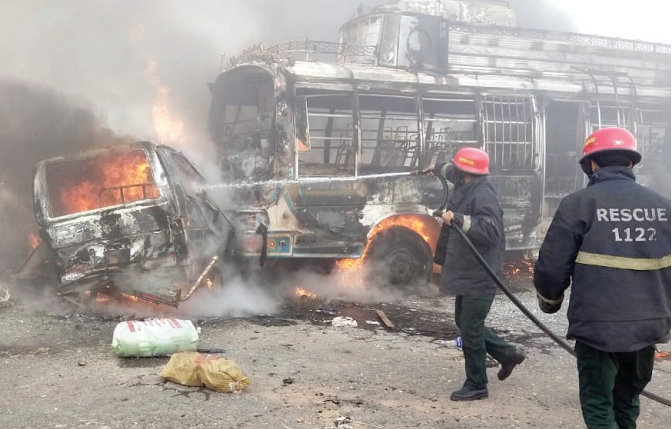 At least 13 people, including seven members of a family, were burnt alive and 34 others injured after a collision between a passenger van and a bus near Narang Mandi. The accident took place 4km away from Narang Mandi on Kala Khatai Road near Darbar Syed Miran.

The deceased were so badly burnt that only eight of them could be identified by their relatives. The remaining five bodies were lying unidentified in a morgue in Muridke, Sheikhupura. The district administration may decide to carry out DNA matching of samples from the remaining bodies to identify the victims if their identities are not confirmed by their families. The bodies of seven identified victims of the same family were shifted to Bado Malhi, Derawala village. The eighth body was taken to an area near Shahfara an Kala Khatai Road. The Kala Khatai Road is known as a dangerous route by commuters as every year several accidents causing a large number of casualties take place on it.

The deadly collision reportedly occurred due to fog in the area. A rescue officer shared with The Express Tribune that as one of the vehicles left Narang Mandi, the driver might have sped it up on finding a patch where the road was clear. Suddenly, he reached a patch of thick fog which had impaired visibility on the road. Before the drivers of the two vehicles could reduce their speed or gauge the situation, they rammed into each other. The collision was so intense that the van's body got entangled into the bus. It was followed by a heavy gas cylinder explosion in the van. In no time, the fire engulfed the van. Before the passengers of the bus could escape, the fire spread to them also.

Rescue 1122 received the first call at 7:57am and the first emergency vehicle reached the spot in 10 minutes. On observing the gravity of the situation, the rescue workers asked for more support. A rescue officer said there was no fire brigade vehicle at Narang Mandi, the nearest rescue station. A fire vehicle was sent from Muridke through the Old Narowal Road. By the time it reached the spot, the fire had engulfed both the vehicles. At least 47 people were found dead or injured. After examination, 13 of them were found to have lost their lives. Local people and private emergency services shifted 17 injured people to the nearest hospitals, while 17 others were shifted by Rescue 1122 ambulances.

Panic spread among the residents of the area and commuters on seeing the charred bodies, hearing screams of survivors and witnessing thick smoke and high flames. A sense of melancholy prevailed in Bado Malhi after the seven bodies of a family reached home. Only a few days back, at least nine people had died in a day in accidents on Kala Khatai Road. In an earlier accident on the same road on November 11, 2013, at least four people died and 22 were injured. In December 2013, at least five people were killed and several others injured in an accident. On October 31, 2015, six people died and 20 were injured when a speeding bus overturned.

In November 2015, at least five people died after a collision between a car and a passengers van on the road. In November last year, one person was killed and three others injured in an accident involving a motorbike on the same road. In January last year, at least 10 people were injured in a collision between a van and a bus. Earlier this year, a minor died and 10 people were injured in an accident on the Kala Khatai Road.