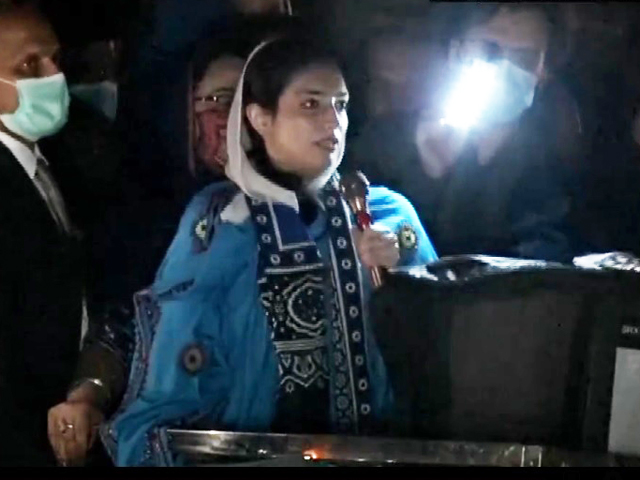 The Pakistan Democratic Movement (PDM) leaders kicked off their public meeting at the Ghanta Ghar Chowk in Multan on Monday as the Punjab government ordered removal of barricades from the original rally venue, Qasim Bagh Stadium, only hours before the rally was to begin.

A fire broke out and engulfed a building near the venue in Multan where the PDM is holding its anti-government rally. The fire erupted as soon as PML-N leader Maryam Nawaz began her address.

Fire erupts close to venue of PDM’s rally in Multan
The government and the establishment have to think that this is not 2007#PDMJalsaMultan pic.twitter.com/yD12uIyCLf

Maryam said Sharif family has been going through difficult times recently. “But Nawaz Sharif told me that leave your worries at home and only think about the issues being faced by masses.”

She lashed out at the PTI-led government, saying the “selected government” did not even inform her about the demise of her grandmother while she was in Peshawar where cellular services were suspended due to the security concerns.

Commenting on PML-N supremo Nawaz Sharif’s decision of not attending her mother’s funeral in Pakistan, Maryam maintained that elected representatives of the country have always endured such difficulties. “Nawaz was not playing a county cricket in London that he did not come to attend funeral,” she remarked, implying that the “difficult decision” was taken due to some compulsions.

“If Covid-18 [Imran Khan’s government] goes home then Covid-19 will also vanish,” she said, claiming that the incumbent government is a bigger threat than coronavirus which she said has destroyed the country’s economy and people’s livelihood.

“Imran Khan will be remembered as a Covid-18.”

Maryam quoted several examples of “corruption scandals” against Prime Minister Imran Khan’s government including the PTI foreign funding case, Billion Tree Tsunami project and several others, saying that “despite all this they say he [Imran Khan] is honest.”

“Who is behind the recent campaign in favour of Isreal in Pakistan,” Maryam questioned, adding that people of the country wanted to know whether PM Imran and his “selectors” are also on the same page over the issue of normalising ties with Tel Aviv.

Daughter of late PM Benazir Bhutto, Aseefa Bhutto-Zardari in her maiden address said the people of the country have decided that the “selected government” be sent packing.

“I pay tribute to all the party workers and activists that despite all hurdles created by the ‘selected government’, people have gathered in large number here.”

Aseefa said she came in Multan on behalf of her brother and party chairman Bilawal Bhutto-Zardari, who went into isolation after contracting coronavirus last week.

“If our workers are arrested then our women leaders are ready to face all challenges.”

Taking to Twitter, PPP chairman Bilawal Bhutto Zardari said the streets of Multan reflected a referendum for democracy and against ‘puppet raj’.

“Multan defeated selected today. PTI had challenged PDM that we could not hold our Jalsa. Turns out their jails couldn’t hold our workers, their force couldn’t stop the people; the streets of Multan today were a referendum for democracy and against puppet raj. Next stop Lahore IA,” he wrote on his official handle.

Multan defeated selected today. PTI had challenged PDM that we could not hold our Jalsa. Turns out their jails couldn’t hold our workers, their force couldn’t stop the people; the streets of Multan today were a referendum for democracy and against puppet raj. Next stop Lahore IA pic.twitter.com/13YPnZvFsZ

JUI-F leader and PDM chief Maulana Fazlur Rehman in his opening remarks lauded the workers and supporters of PDM parties for attending the rally despite attempts by the government to stop opposition from holding their public gathering.

“He [PM Imran] is visiting cantonments and ISI headquarters to pretend that he is safe [from being ousted] but you are not safe,” he remarked.

Fazl said his party will also stage protest demonstrations to condemn the arrest of opposition party workers by the PTI-led government.

The JUI-F chief also urged his party workers to attend the PDM’s Lahore rally on December 13 in large numbers, which will be the final face-off between the government and opposition before a likely march towards capital Islamabad.

Fazl claimed only his one press conference compelled the government to allow opposition parties to hold their rally in Multan. “They [PTI government] had said they won’t let rally to be held at any cost but now you can see for yourself.”

In his opening address, former prime minister Yousaf Raza Gillani congratulated the participants on joining the rally, "despite the government putting hurdles in the way".

“The government did not let us prepare for the rally,” the former premier said, adding that there was no electricity arrangement or proper security.

The senior PPP leader added that, "We had told them [the government] that this power show will be held, and I thank you all for proving that a reality.”

The Punjab police and Multan administration remained at odds with PDM activists over the weekend as the latter attempted to prepare the venue for the rally. Dozens of activists, including son of former prime minister Yusuf Raza Gilani, Ali Qasim Gilani, were arrested by the police on Sunday.

The provincial government had been adamant on not allowing the PDM to hold the rally in light of the federal government's ban on holding public gatherings due to rising coronavirus cases. No preparations for the rally could be made as the venue had been sealed, whereas previously hoisted party flags were also taken down.

Earlier, a heavy contingent of police was deployed at the entrances and exits of the city to stop the PDM workers from reaching the venue. According to reports, booking of transport buses from other cities to Multan had also been banned. 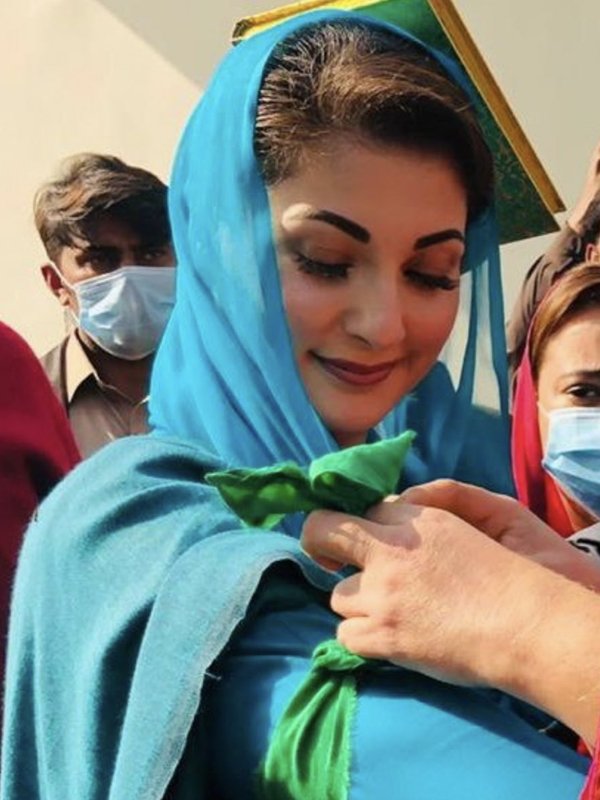 Prior to her departure from Lahore, Maryam, while addressing the media, questioned whether all Covid-19 related SOPs were only for the opposition parties to follow. "They were not being followed in either the government's own rallies or the Jamaat-e-Islami's (JI)," she observed.

“Covid-19 will surely go away, but removing Covid-18 is essential,” Maryam said, taking a jibe at the PTI-led government elected two years ago. 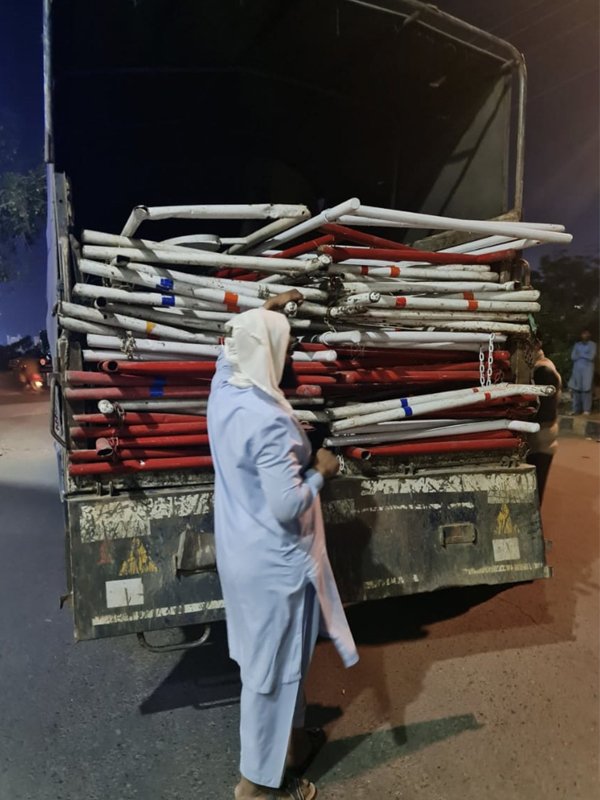 A man stands with a van carrying what appears to be road blocks, near the Multan rally venue. PHOTO: EXPRESS

She reiterated that the incumbent government's days were numbered, and "they can see it coming".

Maryam claimed that arrests were being made in Multan to stop the rally in Lahore, which was scheduled to be held on December 13.

“The rally will be held, and it would be successful!” she said. “Don't care even if I am to be arrested. I am not going to climb walls out of fear of arrest. I have been imprisoned twice for no crime and I am not afraid of getting arrested for the third time,” she observed.

Two days earlier, FIRs were registered against 80 nominees and 1,800 unidentified persons at the Lohari Gate police station in Multan on the charge of occupying Qila Kohna Qasim Bagh.

On Sunday, November 29, Prime Minister Imran Khan, in a series of tweets, lambasted the oppositionfor persisting on holding rallies under the PDM's banner despite a sharp rise in Covid-19 cases across the country.

Highlighting the intensity of the second wave of the pandemic, the premier said the "problem confronting us in Pak during COVID 19 is of a political leadership that has never gone through any democratic struggle, nor worked with ordinary citizens to understand the problems they confront, nor contributed in any substantive way for betterment of ordinary citizens". 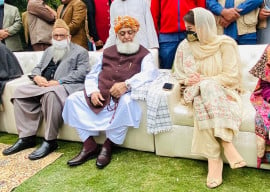 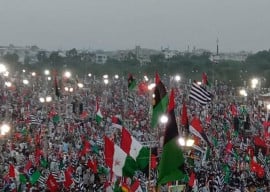 PDM is making Imran Khan stronger & stronger on one hand they have formed an alliance PDM but they are contesting elections as individual party as seen in gilgat baltistan elections.why they did not contested jointly in recent elections which PTI won.