'FIFA should retire No. 10 shirt after Maradona death'

In a first, 'serious' coral bleaching reported in Pakistan near Churna Island

WWF-Pakistan warned of serious bleaching of corals around Churna Island. In some areas, large patches of bleaching were observed. PHOTO: WWF-Pakistan
KARACHI:

WWF-Pakistan on Thursday appealed to the government to declare Churna Island a Marine Protected Area (MPA) after coral bleaching was reported in some areas of the island.

This is the first time that the phenomenon has been reported in Pakistan.

According to a statement released by the WWF-Pakistan, a PADI certified driver, Khizar Sharif, while on a diving expedition around the north-eastern part of Churna Island in the last week of October, noticed serious bleaching of corals. In some areas, large patches of bleaching were observed.

WWF-Pakistan termed the bleaching a grave threat to the coastal biodiversity of Pakistan.

Corals are colonial marine animals that live in clear shallow waters, and are said to be relatives of jellyfish and sea anemones which form reefs in some areas of the world. As one of the most diverse ecosystems, these reefs are referred as rainforests of the sea.

In Pakistan, corals are found in small quantities around the Churna Island, Astola Island, Ormara (Roadrigues Shoals), Gwadar and Jiwani in Balochistan.

In the 2000s, coral patches were identified along the coast of Pakistan under the Darwin Initiative Project, that involved WWF-Pakistan, Centre of Excellence in Marine Biology, and Marine Reference and Resource Centre, University of Karachi.

Later, further studies were carried out on corals under the WWF-Pakistan’s Pakistan Wetlands Programme. In total, 55 live coral species were recorded from the coastal waters of Pakistan, which existed on a very limited area and were said to be prone to environmental change and other threats, especially pollution. 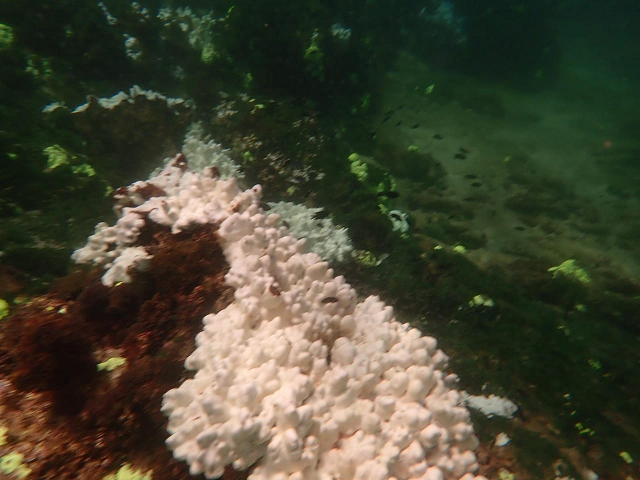 A coral pictured near the Churna Island has turned white after environmental conditions possibly caused it to expel the zooxanthellae in its tissues. WWF-Pakistan

Corals live in compact colonies of many identical individual polyps and obtain the majority of their energy and nutrients from zooxanthellae that live there. Negative environmental conditions such as abnormally warm or cool temperatures, high light, and even some microbial diseases can lead to the breakdown of the relationship (symbiosis) between coral and zooxanthellae.

In such conditions, corals expel the zooxanthellae living in their tissues causing the coral to turn completely white. This process is called coral bleaching and leads to the death of corals.

According to Muhammad Moazzam Khan, WWF-Pakistan Technical Advisor (Marine Fisheries), there can be several possible reasons for bleaching of corals in Pakistan.

The major reason may be because of the rise in seawater temperature due to industrial activities, as there is a thermal power plant, an oil refinery and a single point mooring (SPM) in the area. The additional infrastructure has been developed at the site for construction of another coal powered plant, he added.

Cumulative impacts of these activities are likely to be responsible for the coral bleaching.

Furthermore, there are plans to establish a liquid petroleum gas (LPG) terminal at Churna Island, that can cause excessive dredging in the area. "If such development activities are carried out at Churna Island, then they will not only negatively impact the corals but may wipe out most of the rich biodiversity from the area," he said.

Commenting on this issue, Dr Tahir Rasheed, Regional Head Sindh and Balochistan, WWF-Pakistan said that there is a need to protect the rich biodiversity and pristine environment of Churna Island. He emphasised that this can only be achieved by declaring Churna Island a Marine Protected Area (MPA) as the decision has been pending with the Government of Balochistan.

He further added that once Churna Island is declared an MPA, industrial activities will be controlled and tourism can be streamlined. This declaration will also lead to the management of fisheries in the area, which can ensure conservation of diverse fish species and can help reduce ghost fishing.

He urged to closely monitor coral bleaching in the area, adding that in case any major increase is noticed, effective mitigation measures should be taken to control it.

In the past few years, Churna Island has become a major attraction for recreational activities. It is considered an important area for snorkelling and scuba diving. Although most divers and snorkelers are environmentally conscious and do not harm coral, considering them to be nature’s gift to Pakistan.

However, a few amateur divers trample or disturb them. In addition, a number of fishermen are also involved in dislodging of corals and selling them to aquarium traders in Karachi.

Another reason for bleaching of corals may be due to the increasing levels of pollution in the area. WWF-Pakistan believes that abandoned, lost or otherwise discarded fishing gears (ALDFG) are also a serious environmental challenge in waters around Churna Island. These ghost fishing gears have a severe impact on corals and continue to entangle fish and shellfish leading to their mortality.

A mass-scale ALDFG has been reported in the vicinity north of Churna Island. WWF-Pakistan appealed to the relevant government departments, tourists, local communities and citizens of Pakistan to help conserve this ecologically significant marine area.