'India has launched a wave of terrorism against Pakistan'

Modi is running 87 terrorist camps in India and Afghanistan whose operators have been targeting Pakistan, says Masood 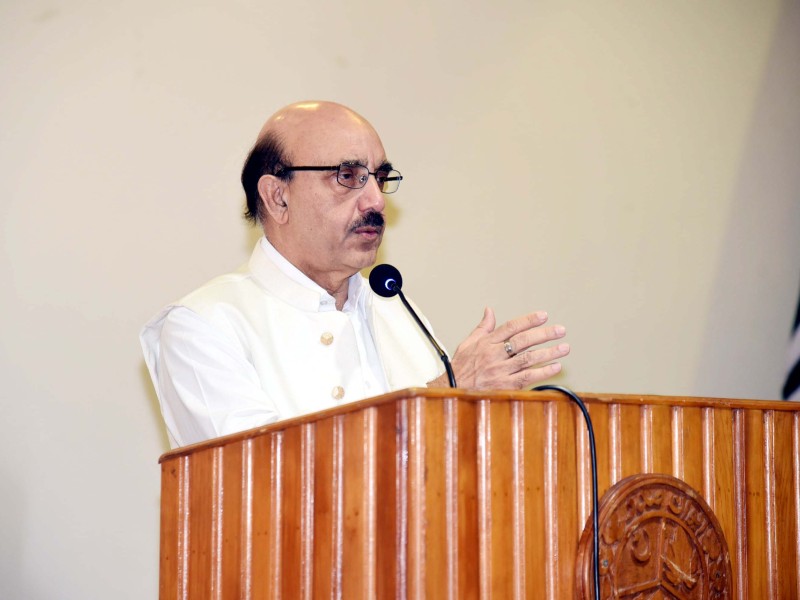 Azad Jammu and Kashmir (AJK) President Sardar Masood Khan said that India has launched a wave of terrorism against Pakistan and all the terrorism is directly or indirectly Kashmir-centric.

“Over the years, Indian intelligence agencies have been sponsoring, engineering, financing and executing acts of terrorism and subversion against Pakistan, Azad Kashmir and Gilgit-Baltistan,” he said in a message to All Parties Conference, organised by the Tehreek-e-Kashmir UK.

The moot participated by diaspora community leaders, representatives of different political parties and members of parliament discussed a campaign strategy to expose India’s state-sponsored terrorism against neighbouring countries, violation of human rights and atrocities committed by its army against innocent Kashmiris.

The AJK president said irrefutable evidentiary proof of these crimes has been furnished and these crimes cannot be swept under the carpet now.

India, he said, has been selling a false narrative to the world that it is fighting terrorism in Kashmir. "The fact is, it is the biggest perpetrator of international terrorism in South Asia, particularly in Kashmir and Pakistan."

He said a US agency - The Financial Crimes Enforcement Network (FinCEN) - and many other entities have established that over forty banking institutions are involved in terrorist financing. "These serious allegations against India are being investigated by the Financial Action Task Force."

India is running 87 terrorist camps in India and Afghanistan whose operators have been targeting Pakistan’s schools, banks, stock exchange and city centres, he added. "If you go through the list of the networks, recruits, saboteurs, arms and ammunitions, and huge funding that India has mobilised, one would see clearly that India has launched a walmart of terrorism against Pakistan. All this terrorism is directly or indirectly Kashmir-centric."

While saying that “this evil triad must be broken up”, the president urged the United Kingdom parliamentarians and political leaders to expose India in order to stop its human right violations in Jammu and Kashmir, its ceasefire violations along the LoC and its unbridled terrorism in the region.

Commenting on recent incident that killed at least six people and injured seriously scores others in Pakistani side of LoC, he said. "The Indian hostile fire targeted all sectors along the ceasefire line. The Neelum, Leepa and Jehlum Valleys, as well as Bagh sectors, were hit. It appears India wants to trigger and escalate a devastating war."

He said that in the past three months, 2 million non-native Hindus have been illegally settled in the IIOJK. "Native Kashmiris’ land is being stolen from them as black laws authorise occupiers to confiscate, commander and expropriate any part of Kashmiris’ land and build illegal settlements there," he added,

Masood said that after 72 years when the occupation forces realised they could not integrate Jammu and Kashmir in the Indian state or win hearts and minds of the people of the occupied territory, they have now forcibly annexed the territory against the wishes of people and are transforming the Muslim-majority state into a Hindu state.

He urged the United Kingdom, as a permanent member of the United Nations Security Council, must activate the council to end genocide and land grab in the Indian Occupied Jammu and Kashmir.

In addition, he said, it must urge its permanent delegation to the UN to play a key role in putting the evidence against India on terrorism in the council’s Counter-Terrorism Committee and the 1267 Committee.

He thanked Fahim Kiyani for organising all parties conference on the situation in Jammu and Kashmir and also expressed his gratitude to all those MPs and community leaders who were attending the conference.