Abhishek Bachchan claps back at troll comparing him to a farmer

The actor over the years has perfected the art of replies

Bollywood actor Abishek Bachchan every now and then becomes the target of internet trolls. Much of the trolling, the Housefull 3 star faces is due to him being the son of perhaps Bollywood's biggest legend, Amitabh Bachchan.

Recently a Twitter user posted a picture of an Indian farmer resembling Abishek along with a caption that read, 'If Abishek wasn't Bachchan', reported Hindustan Times. Having been subjected to social media trolling since a while now, Abishek didn't go out silently and instead took a jab at the netizen in question.

Abhishek gave the person a taste of their own medicine and replied, “Hahahaha. Funny! But still better looking than you!” He also added a folded hands emoticon in the end. 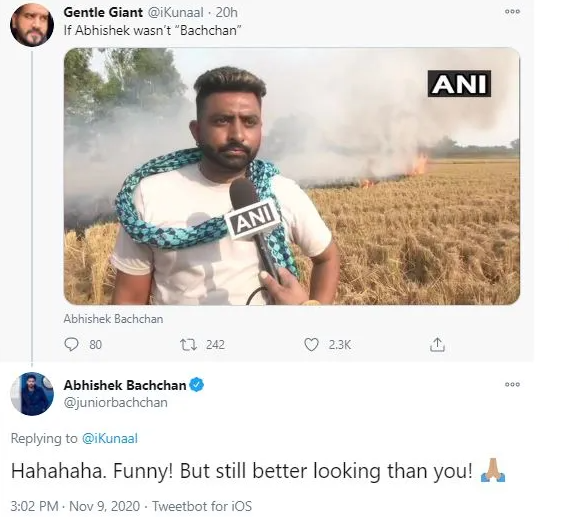 When another person, also named Abhishek, said the actor debuted in Refugee because he was a ‘nepokid’, the actor replied, “Arey yaar, yeh saare duniya ke Abhishek mere peeche kyu padh gaye hain. Baksh do maharaj, chup chaap apna kaam kar raha hu (Oh my, why have all the Abhisheks of the world started attacking me. Have mercy, I’m just trying to do my job).”