Attackers fired gunshots at the trucks, forcing the drivers to abandon the vehicles and escape 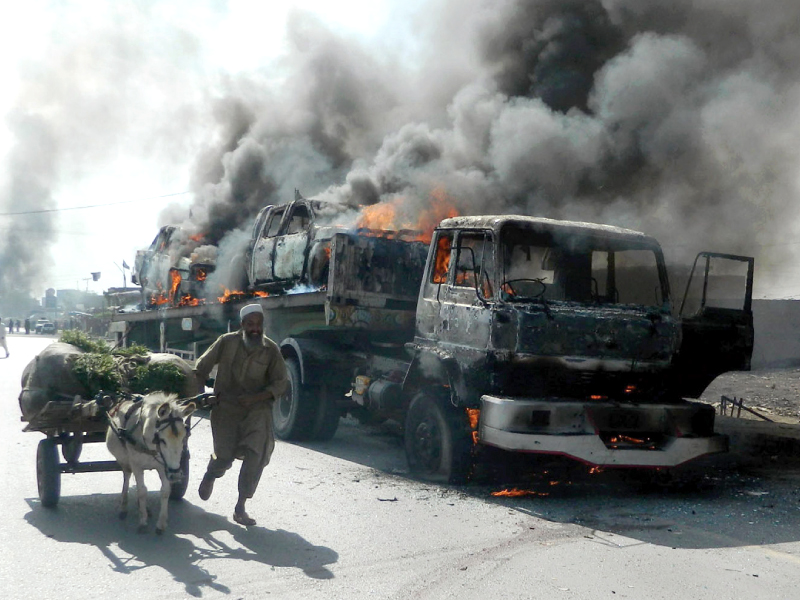 Two container truck carrying Nato supplies to Afghanistan were set on fire by unidentified miscreants on Bara Road near Jalandher village in Khyber district of Khyber-Pakhtunkhwa on Friday.

A security official told The Express Tribune that the attackers fired gunshots at the trucks, forcing the drivers to abandon the vehicles and escape.

Later, they set the trucks on fire. The drivers remained unhurt. One of the drivers requesting anonymity said the trucks were transporting four armored vehicles for Nato forces.

Police officials said security forces had launched a search operation in the area.

In July last year, a driver had suffered bullet injuries when militants attacked a container truck carrying supplies to Nato troops in Afghanistan in Khyber district.

That incident took place at the Pakistan-Afghanistan border road near Takhta Baig checkpost.

Pakistan is a major transit supply route for the NATO mission in landlocked Afghanistan.

Most supplies and equipment required by foreign forces in Afghanistan are usually shipped through Pakistan, although US troops increasingly use alternative routes through Central Asia.

Trucks travelling through Pakistan to supply US-led forces have frequently been attacked during Nato’s 20-year intervention in Afghanistan.

In 2011, around 20 trucks were ablaze in a rocket attack on a NATO trucking terminal in Quetta.