We will not go back till political prisoners are not released, say protesters 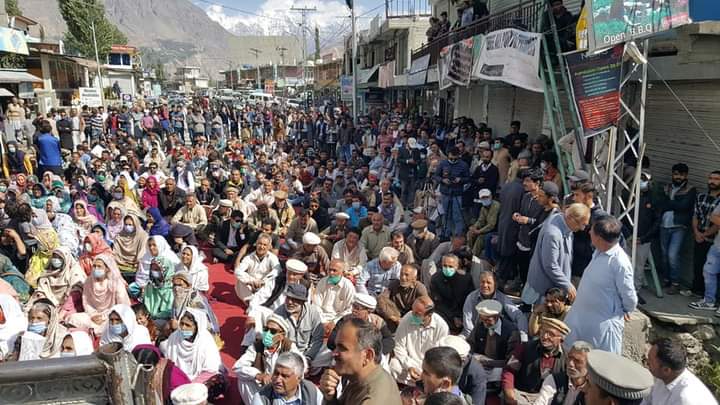 Hundreds of men, women and children have staged a protest demonstration in the Hunza valley of Gilgit-Baltistan, demanding the immediate release of the jailed progressive leader Baba Jan along with 14 other political prisoners.

The sit-in staged at Hunza’s major Ali Abad town entered into the second day on Tuesday as protestors refused to end it till their demands are accepted.

“We will not go back till the political prisoners are not released,” said leaders addressing the crowd in Ali Abad, a town located about 100km from Gilgit.

A senior leader of Awami Workers Party Baba Jan, Aleem, Iftikhar Karbalai and nine others are currently serving life imprisonment at a jail in Gahkuch handed down by an anti-terrorism court for setting government property on fire during riots that erupted in 2011.

The speakers demanded from the government to public the judicial inquiry report of the August 11 incident and bring to justice the police officer who reportedly shot dead a father and son, which led to riots in the region.

The speakers also demanded the appointment of judges to the Supreme Appellate Court and early hearing of the review petition filed by Baba Jan and others against their conviction that is pending for hearing for the last three years.

Senior Advocate and socialist leader Ehsan Ali who is pleading the cases of the convicted prisoners also addressed the demonstrators.

Meanwhile, family members of the incarcerated leaders have called for a boycott of the forthcoming elections for Gilgit-Baltistan Assembly due next month. The lawyers in Hunza have also announced a boycott of courts on Wednesday to show solidarity to the jailed leaders