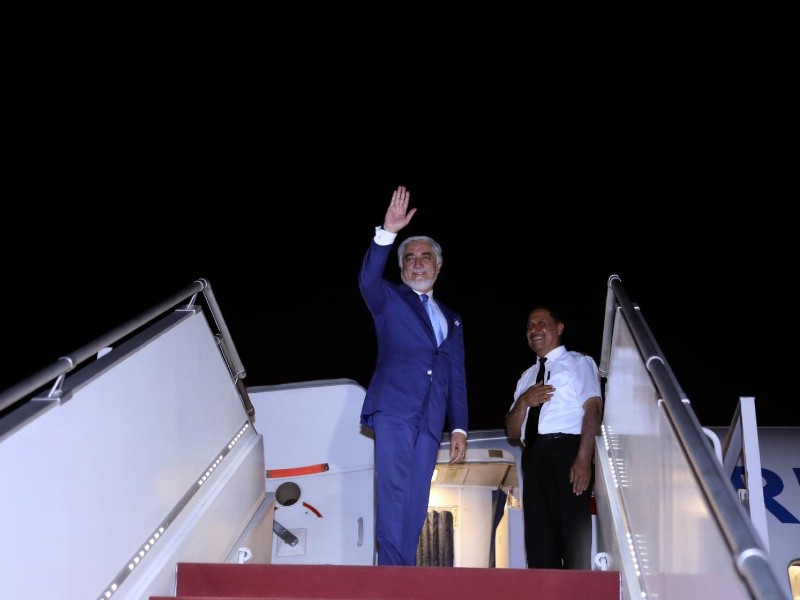 Dr Abdullah Abdullah, Chairman, Afghanistan’s High Council for National Reconciliation (HCNR), on Wednesday appreciated Pakistan’s efforts with regards to the Afghan peace process, and said that he was concluding his three-day trip to Islamabad “with a very positive impression and hope in his heart”.

On the last day of his visit, Dr Abdullah spoke at a roundtable event organised by the Centre for Research and Security Studies (CRSS) and called on President Dr Arif Alvi at the Aiwan-e-Sadr. Earlier this week, he had met Prime Minister Imran Khan and Foreign Minister Shah Mehmood Qureshi.

Speaking at the CRSS, the Afghan leader praised Islamabad’s recent “string of confidence-building” measures and specifically mentioned the beefing-up of trade infrastructure along the Pak-Afghan border to boost bilateral trade and the announcement of new visa policy.

Abdullah’s visit comes amid ongoing direct peace negotiations in Doha between the government in Kabul and the Taliban. He said that he had wanted to visit Pakistan for a long time, and was “concluding his trip today with a very positive impression and hope in his heart”.

Relations between Pakistan and Afghanistan have long been rocky. But Abdullah said that there was a need for going “beyond the rhetoric and the usual blame game”, because no one could afford to pursue dissolution.

The Afghan leader expressed similar views in an interview with Reuters. He said that he believed there had a been a change in recent years in Pakistan’s approach, adding that they still had influence over the Taliban leadership, though the degree was at times exaggerated.

“It was communicated to the Taliban that it was important for them, it’s important to their relations with Pakistan that they sit around the negotiating table,” he said, adding that they had helped break decades of the Taliban refusal to talks. “I do consider this as an important development.”

At the CRSS, Dr Abdullah also dilated on the intra-Afghan negotiations and stressed the need for both sides to “work it out with a broad-based consensus”. He added that there was a “sense of urgency than ever” to look towards “our region as one”.

He said his meetings with the Pakistani leadership, and overall mood of these parliamentary institutions very positive and he would take “this mood back to Kabul” with hoped for increased parliamentary interactions between two sides.

Pakistan played a key role in the Afghan peace process which resulted in the signing of the US-Taliban accord in Doha in February this year and the subsequent start of the intra-Afghan dialogue in the Qatari capital in September.

The administration of President Donald Trump, who is seeking re-election in November 3 vote, reached the deal with Taliban to end America’s longest war and to pull out the US troops from the country. The withdrawal was expected to be complete in May, subject to certain security guarantees.

Trump is currently lagging behind Democrat challenger Joe Biden in polls. However, in the Reuters interview, Abdullah said that he did not expect the result of the upcoming presidential election to dramatically change the Afghan peace process or troop withdrawal plans.

“Nobody can say with certainty what would be the impact of the outcome of the elections in the United States but based on my experiences and interactions, the policy will not change that much,” he said. “Neither Democrats nor Republicans would want to see all the gains or all the sacrifices they have made in Afghanistan in vain…(or) be hurt once again from Afghanistan or because of Afghanistan.”

Also on Wednesday, Dr Abdullah called on President Alvi. During the meeting, the president emphasised that there was no military solution to the conflict in Afghanistan and a politically negotiated settlement was the only way forward.

Dr Alvi reaffirmed Pakistan’s support to the Afghan-led and Afghan-owned peace process and stressed that the Afghan leadership must seize this historic opportunity to work together constructively and secure an inclusive, broad-based and comprehensive political settlement.

He assured the visiting Afghan leader that Pakistan would stand-by the decisions made by the Afghan nation with regard to the future of their country. He also underlined the need for guarding against the “spoilers”, who did not wish to see return of peace in the region.

Referring to the opening of border crossing points to facilitate Afghan transit trade despite the Covid-19 pandemic, the president urged the two countries to work together to enhance trade, transit and people-to-people exchanges.