Rescuers race to save scores of stranded whales in Australia

The animals are only accessible by boat, limiting the number of rescuers who can reach them

Up to 90 whales have already died in the operation. AFP

Rescuers raced to save nearly 200 whales stuck in a remote Australian harbour on Tuesday, hoping to minimise the death toll of a mass stranding which had already killed 90.

Officials said at least 25 of the mammals had been freed so far.

A large pod of long-finned pilot whales is currently stuck on a sandbar in Macquarie Harbour, on Tasmania's rugged and sparsely populated west coast, scientists said. 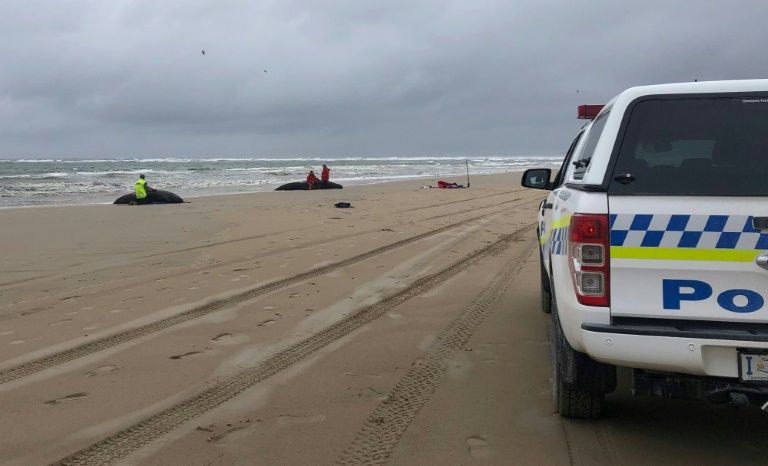 Rescuers are battling cold, wet conditions as well as the harbour's unusual tides to try and save the surviving whales. AFP

Images from the scene showed a shallow body of water, thick with scores of the large slick-black creatures manoeuvering for space, and rescuers wading in as they worked to refloat the whales in deeper passages.

About 60 people -- including volunteers and local fish-farm workers -- are involved in the rescue attempt.

Government marine biologist Kris Carlyon said "about a third" of the 270 animals were dead by late Monday, and that rescuing survivors would be a challenging task likely to take several days.

But there were hopes Tuesday that efforts were already paying off, with at least 25 rescued and escorted to open ocean by boats, according to the official leading the operation. 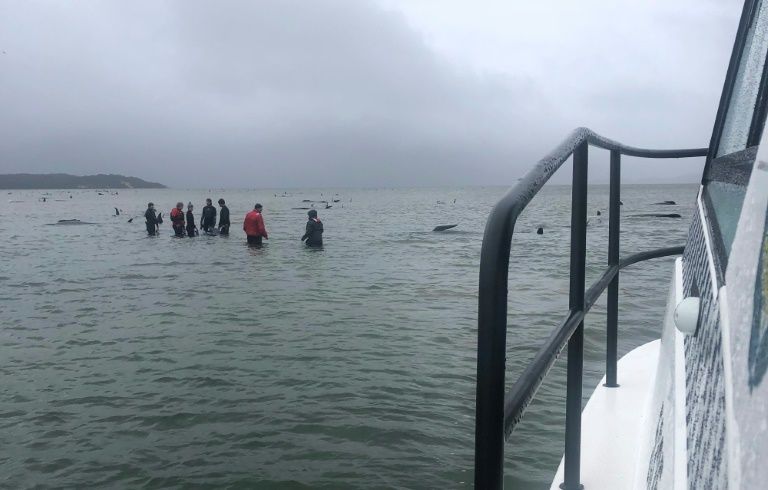 Rescuers are trying to help the surviving whales get back into the open ocean. AFP

"We have now freed a small number successfully that appear to have stayed out at sea, and are now scaling up that approach," Parks and Wildlife Service manager Nic Deka said.

Though mass whale strandings occur relatively often in Tasmania, such a large group has not been seen in the area for more than a decade.

The animals are only accessible by boat, limiting the number of rescuers who can reach them.

They are battling chilly and rainy conditions as well as the harbour's unusual tides, which are dictated by barometric pressure.

"In terms of mass whale strandings in Tasmania, this is up there with the trickiest," Carlyon told reporters in the nearby town of Strahan.

However, Carlyon said many of the partially submerged whales should be able to survive for the several days it would take his team to complete the task, in part due to the inclement weather. 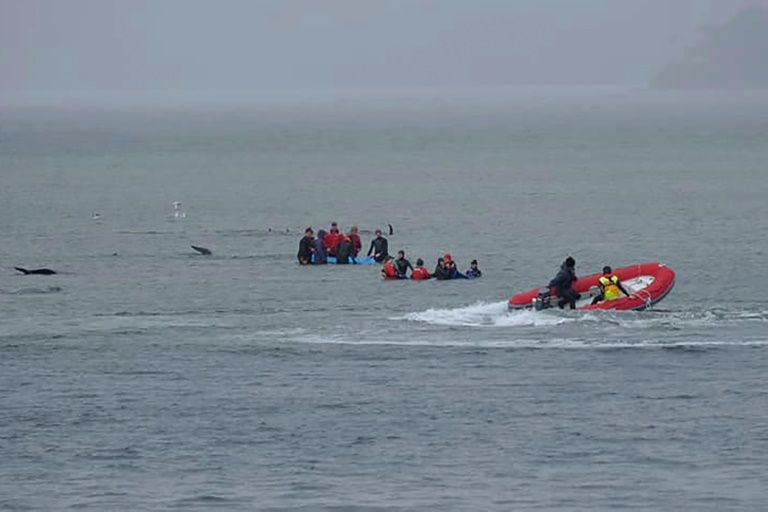 Though mass whale strandings occur relatively often in Tasmania, such a large group has not been seen in the area for more than a decade. AFP

Carlyon said rescuers would still have to "triage" the whales, prioritising the healthiest and most accessible.

Most of a 30-strong group of whales on a nearby beach were found dead Monday, though two were saved and released.

About 60 others on the sandbar are also believed to have since died and Carlyon said it was "inevitable that we've lost more", but a detailed assessment using infrared cameras from the air was planned for Wednesday.

Once the whales are returned to deeper water, Carlyon said, the biggest challenge is herding the social creatures out of the sandbar-riddled harbour -- and hoping they don't swim back to the remaining pod.

Scientists said it was unclear what caused the latest stranding, but Carlyon suggested the pod may have gone off track after feeding close to the shoreline or by following one or two whales that strayed.

"It seems to be a notorious whale trap... you do tend to get these mass stranding events there," she told AFP.

Stockin said that while pilot whales were typically more resilient than other whale species, rescuers faced a race against the clock as the mammals can overheat, their muscles deteriorate and their organs become crushed outside their natural environment.

Mike Double, the head of the Tasmania-based Australian Marine Mammal Centre, said it was "tragic" that such a massive pod had become stranded, but other whales had previously been saved from the same location.

"The state team responsible for responding are extremely experienced and they'll be absolutely working incredibly hard to get the best possible outcome," he said.

‘Female stalking’ to be made an offence

‘50% plus benefits’ policy for women made part of Ehsaas: PM’s aide