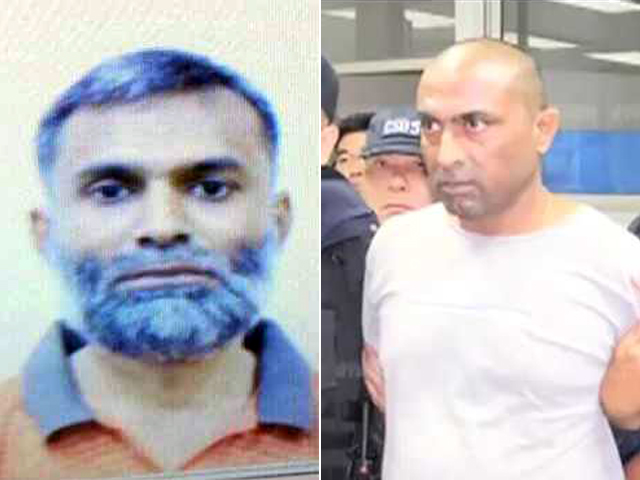 A trial court has handed down death penalty to two MQM workers found guilty of setting fire to a garments factory in Karachi on September 11, 2012 – a deadly conflagration that consumed lives of 264 people, majority of them were factory workers.

The Anti-Terrorism Court (ATC) VII, set up at the Karachi Central Jail, on Tuesday issued a 146-page written verdict on the conclusion of an eight-year-long trial that faced continual delays due to various reasons, including alleged political interference.

In the verdict, the court noted that it found Mohammad Zubair alias Charya and Abdul Rehman alias Bhola guilty of arson, ruling that the men intentionally set the Ali Enterprises factory ablaze after the owners refused to pay extortion money of Rs200million.

In what is considered a largely symbolic gesture, the court sentenced them to 264 separate death sentences, along with life imprisonment.

Abdul Rehman Bhola had fled Pakistan after the fire, but arrested by Thai authorities at a hotel in Bangkok's red-light district in 2016.

Of the eight other people accused, four were found complicit while the other four were acquitted.

The court awarded life imprisonment to the facilitators – Shahrukh Latif, Ali Muhammad, Arshad Mehmood and Fazal Ahmed – who are also liable to pay Rs27,77,353 – equivalent to 30,630 grams of sliver – to legal heirs of each of the 264 deceased as diyat.

Abdul Rauf Siddiqui, who belongs to the MQM, was the provincial minister for industries at the time of the incident.

The fire at Ali Enterprise, a multi-story unit for readymade garment manufacturing at Baldia Town area of Karachi, had sent shockwaves through the country as survivors told of people trapped and killed behind locked factory doors.

The fire, which at first was thought to have been an accident, is believed to have been the worst industrial disaster in the country's history.

A judicial probe highlighted lack of emergency exits, poor safety training for workers, and failure of government inspectors as contributing to the high death toll.

Much of the factory's output was being made for the German company KIK, who paid out over $6 million in compensation to families of the victims.

The two men given the death sentence, Rehman Bhola and Zubair Chariya, were both MQM activists. While the MQM is part of the ruling coalition, the party split into several factions in 2017.

The current MQM leadership denies any involvement with the fire and says such activities were directed from abroad, where several important leaders live, including the founder of the party, Altaf Hussain, who lives in exile and is now a British citizen.  The party says it has cut all ties with Hussain.

"I am satisfied with the court's verdict as it has awarded them very appropriate sentences," special public prosecutor Sajid Mehboob Sheikh told AFP.

According to sources, public prosecutor Sajid Mehboob Sheikh was not only threatened during the trial but also was attacked thrice.

The prosecution submitted a list of 768 witnesses to the court out of which the statements of more than 400 people were recorded while the names of 364 witnesses were later removed.

The witnesses whose statements were recorded included the injured, eyewitnesses, relatives of the deceased, doctors, forensic and chemical experts, factory owners, a joint investigation team (JIT) investigators, former and current investigating officers and officials of other departments.

The prosecutor submitted evidence against the terrorists, including the confessional statement of Abdul Rehman Bhola, result of the identification parades, forensic reports as well as reports of the National Database Registration Authority (NADRA).

WITH ADDITIONAL INPUT FROM AGENCIES

Why on earth the govt. does not ban MQM. This party is just the same. It carries out killing unabated. All criminals are sitting in parliament and provincial assemblies.

Justice served. The symbols of terrorism should be served exemplary punishment under the Law, so that no terrorist would date to spread his word to innocent civilians. My Heart goes out to the sons and the brothers who lost their precious lives in the Baldia Factory fie; Innalillah e Wainnaelahay Rajaoon.