A team of international vets using tranquilliser darts, flatbreads and the soothing lyrics of Frank Sinatra conducted a medical examination Friday on Pakistan's only Asian elephant, ahead of his planned move to Cambodia.

The plight of Kaavan, an overweight, 35-year-old bull elephant has drawn international condemnation and highlighted the woeful state of Islamabad's zoo, where conditions are so bad a judge in May ordered all the animals to be moved.

Following the ruling, Austria-based animal welfare and rescue group Four Paws International were enlisted to help move Kaavan -- whose case was boosted by the singer and activist Cher.

A transport crate must be built and the elephant habituated to it before being flown to a 25,000-acre Cambodian wildlife sanctuary in a "jumbo" jet -- probably a giant Antonov An-225 airlift cargo plane. 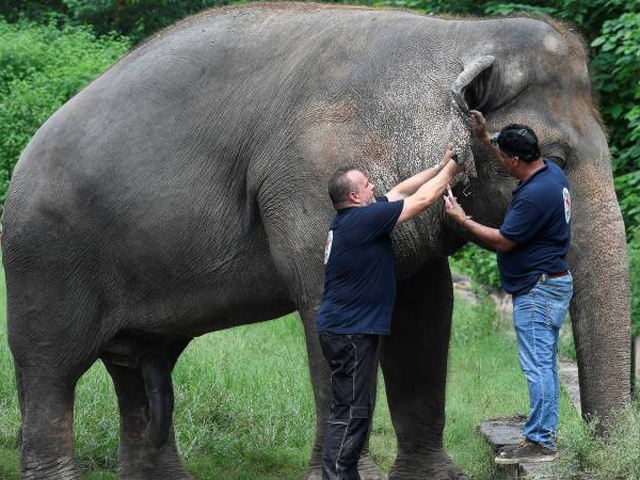 But first, experts must know how Kaavan has fared since the last examination in 2016, so on Friday they sedated him to get up close.

Armed with a tub filled with bananas and flatbreads, Four Paws veterinarian Amir Khalil coaxed the elephant into an emptied-out concrete bathing pond while head vet Frank Goeritz used a tranquilliser pistol to fire three large darts into the animal.

Unaccustomed to close human contact, the elephant grew a little agitated, prompting Khalil to sing Sinatra's classic melody "My Way", which appeared to calm the pachyderm as he chomped on chapatis.

Once the tranquillisers kicked in, Khalil and Goeritz measured Kaavan's hefty frame and girth, took blood samples and inserted a microchip in his left shoulder.

"He is in good general condition... but he is totally obese, he weighs way too much and his feet are terrible," said Goeritz, pointing to the elephant's cracked and malformed toenails that will need medical attention.

With little legislation to safeguard animal welfare, zoos across Pakistan are notorious for their poor conditions.

In 2018, 30 animals died within months of a new zoo opening in the northwestern city of Peshawar, including three snow leopard cubs.

Goeritz said Kaavan has been eating up to 200 kilograms of sugar cane each day and deprived of intellectual stimuli, resulting in "stereotypic" behaviour where he swooshes his head and trunk from side to side for hours on end.

"He is bored. He needs definitely physical and mental challenges," said Goeritz, who has spent three decades working with captive elephants around the world.

Outrage over Kaavan, gifted by Sri Lanka in 1985, went global a few years ago after California vet Samar Khan saw him chained in his enclosure during a visit to Islamabad. 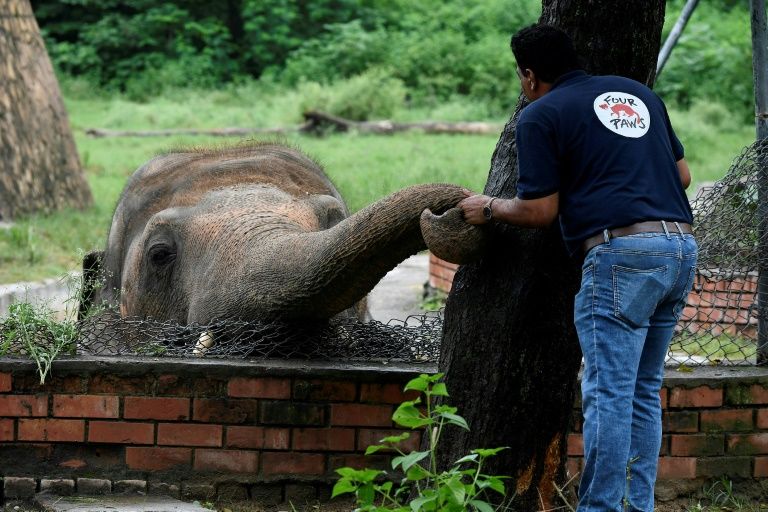 She launched an online petition that eventually caught the attention of American pop icon Cher.

Kaavan's mate Saheli, who arrived also from Sri Lanka in 1990, died of gangrene in 2012. It is hoped Kavaan might eventually be able to re-partner once he is moved to Cambodia.

Tireless efforts by a team of local animal advocates resulted in May's court ruling, under which Kaavan was supposed to be moved within 30 days, though the deadline has been extended.

Lawyer Owais Awan, who filed last year's court petition, said the elephant has appeared happier as vets and volunteers worked with him this week.

"It was quite a moment today because it was the first time in Kaavan's life there was a detailed medical assessment," Awan told AFP.

"I feel happy yet sad. No one thought about doing a detailed assessment on him earlier." 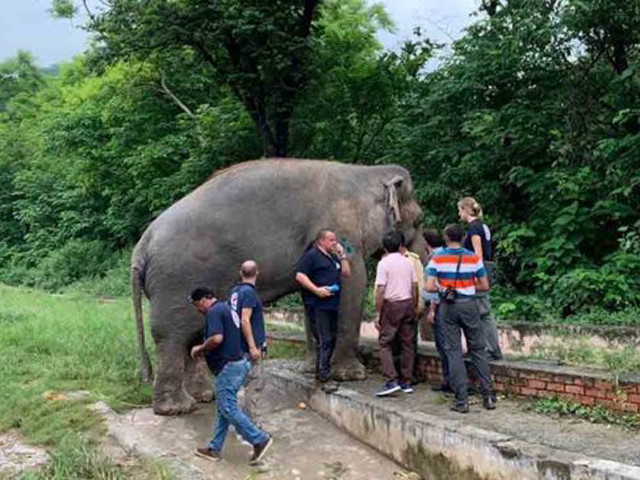 Only a few animals remain at the zoo and attempts by local workers -- many of whom have never been given animal care training -- to move some of them have been disastrous.

Two lions and an ostrich died during or soon after they were relocated. Zookeepers tried to scare one lion out of its pen by setting piles of hay on fire.

The zoo's wolves and bears had been slated for relocation to a reserve in neighbouring Punjab province on Tuesday, but local officials rescinded the invitation at the last minute.

The bears are now destined for a wildlife sanctuary in Jordan, while a home has not yet been found for the wolves, a Four Paws spokesman said.