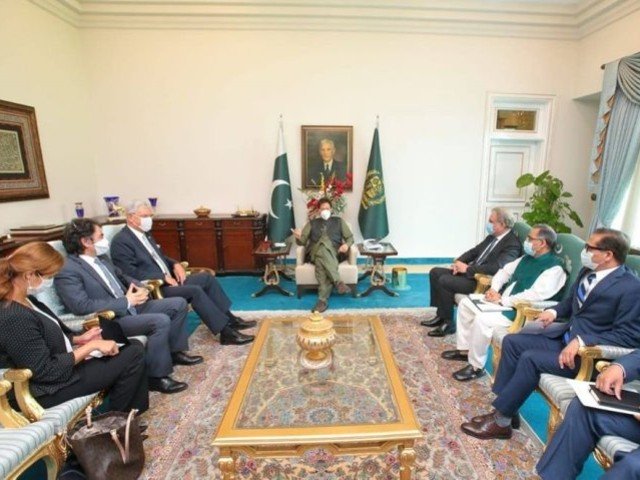 The president-elect of the United Nations General Assembly (UNGA) on Monday offered his good offices to play a role in resolving the longstanding Kashmir dispute provided parties to the dispute agreed to it, as Prime Minister Imran Khan urged the world body to play its role.

“So if my assistance as the president of the General Assembly is requested by the parties, I will be ready to provide contributions within my mandate,” Volkan Bozkir, the UNGA President-elect told reporters at a joint news conference with Foreign Minister Shah Mahmood Qureshi.

Bozkir also praised Pakistan’s remarkable success against Covid-19 pandemic and termed it an example for other countries to follow.

Bozkir, who is Turkish, is on a two-day visit to Pakistan at the invitation of Foreign Minister Qureshi. Apart from his meeting with the foreign minister, the UNGA President-designate also called on Prime Minister Imran Khan.

An official handout issued by the Prime Minister’s Office said Imran extended warm felicitations to Bozkir on his election as the president of the historic 75th Session of the General Assembly.

During the meeting, Imran apprised the Bozkir of the serious situation in the Indian Illegally Occupied Jammu and Kashmir (IIOJK), an issue that was on the agenda of the UN Security Council for over seven decades.

The prime minister highlighted the dire human rights and humanitarian situation in IIOJK since 5 August 2019, as well as the ongoing gross and systematic violations of human rights of the Kashmiri people and the attempts to change the demographic structure of the occupied territory.

He stressed that the UN must play its rightful role in addressing the grave situation and ensuring that the Kashmiris exercised their right to self-determination promised to them in the relevant UN Security Council resolutions.

The prime minister also apprised the General Assembly present-elect of his government’s initiatives to mitigate and suppress the socio-economic impacts of Covid-19 pandemic, focused on saving lives, securing livelihoods, and stimulating the economy.

He informed that his government deployed an $8 billion stimulus package for the poor and needy. This was the highest social security coverage by any government in the history of Pakistan, the prime minister added.

Imran further highlighted his call for ‘Global Initiative on Debt Relief’ and stressed the need for providing greater fiscal space to the developing countries to overcome deleterious socio-economic impacts of coronavirus pandemic.

The prime minister also highlighted the importance he attached to addressing climate change, countering Islamophobia, and combating illicit financial flows from developing countries. He hoped that the 75th session of the UNGA would accord priority to these issues, which affected billions of people around the world.

Later, at the joint news conference, Bozkir acknowledged that the Kashmir dispute was a threat to peace and regional stability. He said the Turkish government had taken a principled position on the dispute.

“However, the position of the UN on this region is governed by its Charter and applicable Security Council resolutions, as was previously expressed by the UN secretary general on different occasions,” Bozkir said.

He stressed that the resolution on the Kashmir dispute was key to sustainable peace in South Asia. “Regional security should be maintained through political and diplomatic solutions. Difficult challenges can be resolved through meaningful, mutual engagement,” he replied, when asked about the role of UN in resolving the festering dispute.

The UNGA president-elect said one of the objectives of his visit to Pakistan was to get the first-hand account of the ground situation on Kashmir, so that when the issue came up for discussions it would be not by “reading notes”.

Earlier, he expressed his condolences over the deaths due to the Covid-19, while praising Pakistan’s unprecedented success against the pandemic. “Pakistan has been a good example for the world with its pandemic-related policies. The figures show that Pakistan has done better than other countries in the world and I am happy to observe it with my own eyes,” he noted.

Bozkir also lauded the leadership of Prime Minister Imran Khan, terming him a “well-known political figure” that, according to him, had a “clear vision for the region, for world peace and security”.

In his remarks on the occasion, Foreign Minister Qureshi said that Pakistan had raised the issue of Kashmir at all international forums, including the UNSC particularly after India unilaterally revoked the special status of the disputed territory.