Despite warnings from the Met Office, Sindh govt’s efforts to clean the city’s drains have come very late 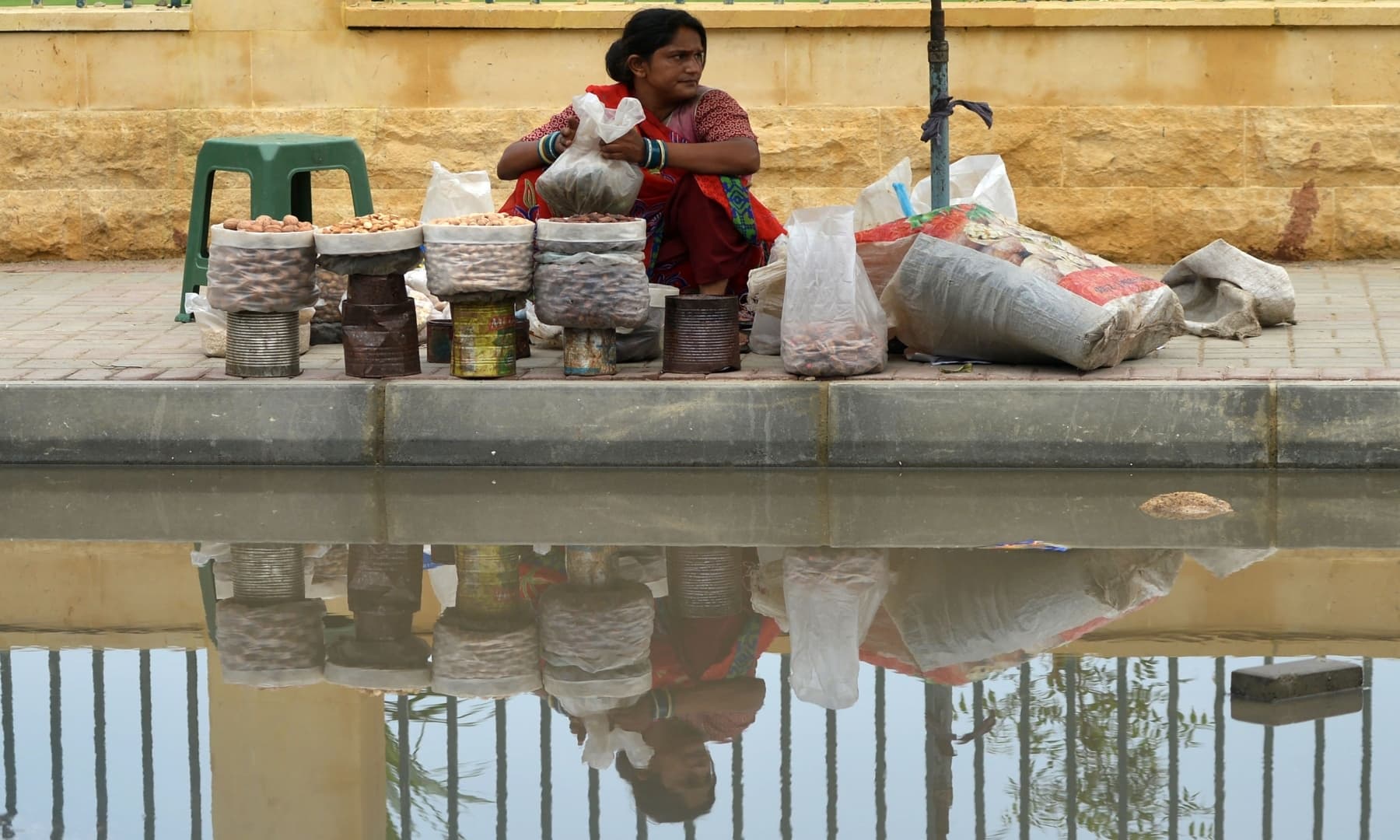 A dry fruit vendor waits for customers alongside a street inundated with rainwater in Karachi. PHOTO: AFP
KARACHI:

Like every year, the arrival of the monsoon rains in Sindh is set to wreak havoc in the streets of Karachi, with more than 550 rain gutters across the city lying clogged with piles of garbage.

According to the Pakistan Meteorological Department’s (PMD) forecast, as compared to previous years, 20 per cent more rainfall is expected during the current season. Due to the delayed cleaning of drains, it is feared that major highways and most areas of the city will be inundated.

The first spell of the monsoon season started on Monday and is expected to continue until today (Thursday). Within three days, several main streets of Karachi have become flooded with accumulated water, making life a living hell for the residents, especially those who have to commute from one place to another.

There are 550 small and large rain drains in the city. The responsibility of cleaning the 38 major ones lies with the Karachi Metropolitan Corporation (KMC), while the cleaning of the remaining 512 small drains is the duty of the six district municipal corporations (DMCs) of Karachi.

Every year, the KMC and the six DMCs partially clean the drains with their limited resources before the monsoon season.

This year, however, the Sindh government did not provide funds to the KMC and took the task upon itself to clean the drains. The government, in collaboration with the World Bank, started cleaning the 38 major drains last week.

A KMC official, who spoke on the condition of anonymity, said the Sindh government had begun cleaning the drains too late.

“The cleaning of drains should have started from June 1. How will they do it when the rains have already started?” he questioned. “With more rains expected this year, the citizens of Karachi will face severe difficulties.”

He added that the provincial government would only clean the 38 major drains and not the smaller ones that come under the jurisdiction of the six DMCs. The Sindh government has not even released funds to the DMCs.

Speaking to The Express Tribune, Central DMC chairperson Rehan Hashmi said that his corporation did not have enough funds to even pay salaries to the employees, let alone carry out a massive drain-cleaning operation.

“We are unable to provide the promised increments to our employees because the Sindh government has not paid the dues of the Octroi tax,” he said. “Despite that, the DMC has cleaned the choked points with its limited resources.”

Hashmi further added that rainwater drains in Central district were full of garbage, so cleaning them has been an uphill struggle.

“The drains are spread over an area of 35 kilometres and we do not have enough funds to clean them entirely. The Sindh government has not released funds. The situation is quite grim,” he disclosed. “In case of heavy rains, low lying areas will be inundated, especially settlements near rivulets like Hassan Colony, Federal-C Area, Liaquatabad UC 41, and New Karachi Nala Stop, among others.

The PMD’s chief meteorologist Sardar Sarfraz, meanwhile, said that the monsoon season usually lasts from July 1 to September 30. “This year, there is a possibility of receiving more rainfall in Sindh, including Karachi. The second spell of rains is expected to start from July 16, so the city must gear up for that.”