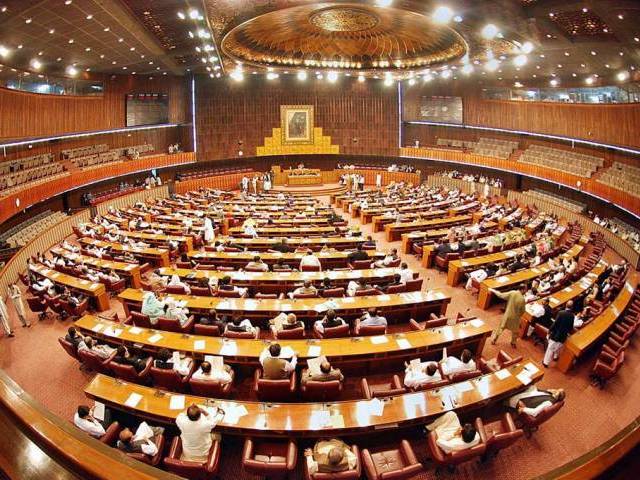 The National Assembly on Monday passed the "tax free" federal budget 2020-21 with majority vote, having a total outlay of more than Rs7.2 trilion.

Minister for Industries and Production Hammad Azhar moved the Finance Bill 2020-21 in the lower house of parliament to give it a legal cover and to amend certain laws.

The house passed the Finance Bill, 2020 and rejected the amendments proposed by the opposition parties in the finance bill.

Prime Minister Imran Khan also attended the sitting and witnessed the passage of the bill.

Speaking on the floor of the house, Hammad said the government has presented a 'tax free' budget and it envisages relief measures not only for the construction sector but also for promotion of mobile phone manufacturing and electric vehicles.

He said duties and taxes on import of 1,600 raw materials have been brought to zero.

The minister said the government increased the petroleum products prices due to upward trend in the international crude oil market and clarified that no sales tax and development levy were not increased on the oil products.

"Mafias in oil, sugar and flour sector will be brought to justice," he added.

Pakistan Peoples Party (PPP) Chairman Bilawal Bhutto Zardari took a swipe at the treasury benches, saying the recent hike in the oil price will add to woes of the masses and surge the prices of essential commodities.

Responding to the opposition criticism, Foreign Minister Shah Mahmood Qureshi said PM Imran was given mandate by the people of the country and he is fully backed by the lawmakers.

He said the PTI-led government will not make any compromise on its ideology of accountability and it allies are stand by the vision of PM Imran.

The size of Public Sector Development Programme (PSDP) for 2020-21 is Rs1,324 billion. Out of this, Rs676 billion has been allocated to provinces while Federal PSDP has been estimated at Rs650 billion.

In the Federal PSDP, Rs418.7 billion are allocated for Federal Ministries/Divisions, Rs100.4 billion for Corporations, Rs3 billion for Earthquake Reconstruction and Rehabilitation Authority (ERRA), and 7 billion for COVID response and other Natural Calamities Program.

Under the head of General Public Service, the major portion goes to executive and legislative organs, financial, fiscal and external affairs which stood at Rs3,663,740 million.

The allocation for Police (Rs158,621 million) forms the major component, with a share of 93.35%, in the total allocation under this head.

Under the head of Environment Protection, an amount of Rs431 million has been estimated in budget 2020-21 for Waste Water Management, which is lower by 8.3% than budget estimates 2019-20.

The sales tax ratio has been reduced from existing 14 percent to 12 percent on point of sale to provide relief to common people and shopkeepers in wake of COVID-19.

Federal Excise Duty on imported cigarettes and tobacco has been increased from 65 percent to 100 percent, while e-cigarettes and other substitutes of tobacco have also been included in this list.

To discourage consumption of caffeine based energy drinks, FED has been increased from 13 percent to 25 percent.

GDP growth target has been set at 2.1 percent while current account deficit will be confined to 4.4 percent. The target has been set to bring down inflation rate from 9.1 percent to 6.5 percent and to enhance the foreign direct investment by 25 Sufficient resources have been earmarked for the CPEC-related projects including its western route. For this purpose, 118 billion rupees have been allocated.

An amount of Rs. 20 billion rupees have been allocated to improve the capacity of health institutions and production of health equipment with the aim to provide better health services and check diseases in the country.

An amount of Rs. 30 billion rupees have been allocated to bring innovation in higher education sector with the aim to improve research and development in subjects such as artificial intelligence, automation and space technology.
Budgetary allocations for Higher Education Commission have been enhanced from existing 59 billion rupees to 64 billion rupees.

Budget for Ehsaas Programme has been increased to 208 billion rupees from the existing 187 billion rupees. A sum of Rs. 30 billion has been provided for Naya Pakistan Housing Authority to provide low cost housing to the people.

Sindh has been provided a special grant of nine billion rupees and Balochistan ten billion rupees, which is in addition to their share in NFC.

A sum of 40 billion rupees has been specified for Pakistan Railways. Due to the economic crisis triggered by the coronavirus, civil servants’ pay and pension remained unchanged from the last year in the Budget 2020-21.