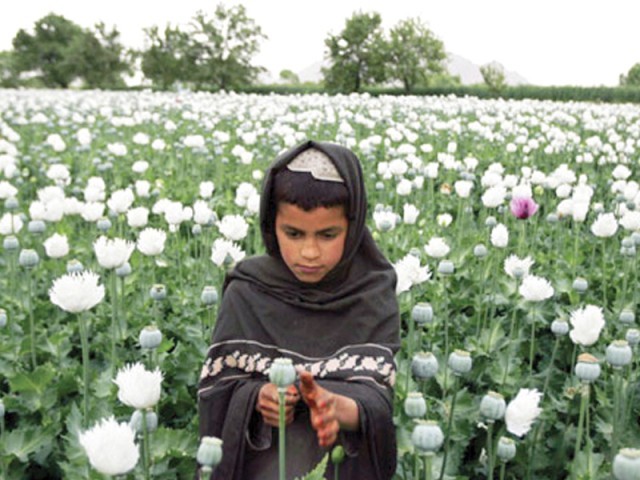 Afghanistan, as of March 2010, is the largest illicit opium producer of the world, ahead of Burma, and Pakistan has a clinical role to play in this statistic.

In 2007, Afghanistan produced an extraordinary 8,200 tonnes of opium (34% more than in 2006), becoming practically the exclusive supplier of the world’s deadliest drug (93% of the global opiates market), according to the United Nations Office on Drugs and Crime (UNODC) Afghanistan Opium Survey 2007.

Being one of the world’s largest opium and heroin producer, the labour demand needed to cater to this extensive poppy harvesting and cultivation is met in an invariably peculiar way.

Hundreds of madrassa students from Chaman and adjoining tribal regions of Balochistan are engaged by Afghan farmers for poppy cultivation in Afghanistan’s two major heroin-producing provinces of Helmand and Kandahar for the past three months.

These Pakistani madrassa students rush to the Afghan provinces with strongholds of the Taliban, on lucrative money-making projects as soon as their madrassas are closed in the first week of June for the three-month summer holidays.

“It is a source of easy money for madrassa students,” says Saifur Rehman, a local social worker of Ziarat who is well acquainted with many in the poppy harvesting workforce.

“They are being paid in the local Afghani currency which has gained strength against the Pakistani rupee in recent months.

“Most students returned home with $1,500 to $2,000 after the harvesting season last year.” Muslim scholars in Afghanistan remain divided regarding the issue of poppy cultivation and its harvesting in Afghanistan. A majority of these scholars declare poppy production against the Islamic injunctions but a few of them disagree and argue that it was permitted in Islam for medical purposes.

However, all of them remain unanimous that heroin production is forbidden in Islam.

Despite the debates, no serious effort is being undertaken by these scholars to prevent the students from engaging in poppy harvesting in Helmand and Kandahar.

“A few of the workers even fell unconscious during harvesting since they were not properly trained for the job,” Rehman says.

Poppy harvesting became the main source of livelihood for many Afghan and Pakistani families since the fall of the Taliban regime after the US and Nato attacks in September 11, 2001.

A 2007 UN report revealed that leaving aside 19th century China, which had a population at that time 15 times larger than today’s Afghanistan, no other country in the world had ever produced narcotics on such a deadly scale.