Minority rights: For the groups with already small numbers, a further marginalisation in parliament

Minority rights: For the groups with already small numbers, a further marginalisation in parliament 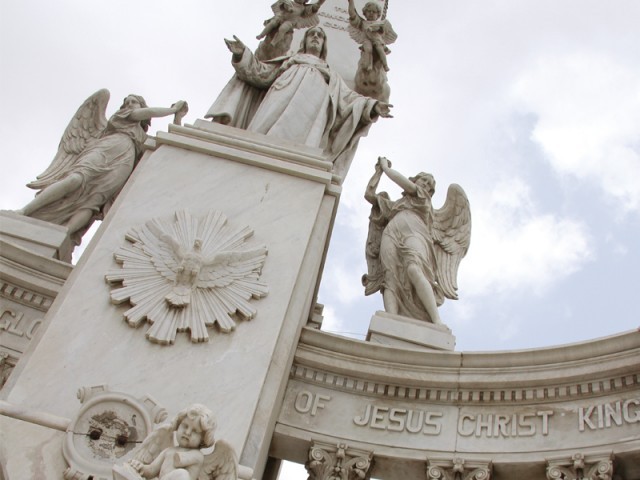 St Patrick’s Cathedral is the seat of the Catholic Archdiocese of Karachi. Seen here, on its grounds is a marble monument of Christ the King, which was constructed in 1931. PHOTO: CHEREE FRANCO/EXPRESS

Many of the minorities in Pakistan, which include Hindus, Sikhs, Christians and Parsis, are unhappy with the people who are supposed to fight for their rights in parliament and see through laws that govern their communities.

On Sunday, a conference was called by the Hindu Panchayat to discuss a 16-point agenda. The fact that only one elected representative, MNA Krishan Chand Parwani, bothered to turn up, disgusted the other people who had gathered there. “The absence of minority legislators in this conference testifies to our claims,” remarked Jai Kumar Dhirani, the Panchayat’s patron.

At the heart of the matter is devolution, a decision which has also affected the workings of the Evacuee Trust Property Board. “After the 18th amendment [was passed], the minority ministry, including the Evacuee trust, were to be devolved to the provinces,” said Advocate M Prakash, a member of the board. “But the federal government handed them over to the human rights ministry instead.”

The trust looks after the properties and buildings left behind by minorities who were evacuated from Pakistan after 1947. Prakash pointed out faults with its 16-member board, which is selected by the prime minister. It hardly makes sense for it to have 11 Muslims but only three Christians, one Hindu and a Sikh as its members.

Another area where the numbers are skewed is the actual house of representatives. Even though Pakistan has more scheduled caste Hindus, their elected representatives are mostly upper-class Hindus, pointed out Dr Taek Chand.

“It is easier for us to approach Muslim ministers than the inaccessible minority members of parliament,” remarked Advocate Kalpana Devi, an outspoken activist of Hindu rights. She pointed out that their “self-styled” minority leaders don’t even know that Hindus have no laws to their marriages and property.

The entire process of choosing a minority MPA, MNA or senator is marked by “briefcases [bribes], nepotism and likes and dislikes”, said Wasandas Bhaagri, a leader of the Bhaagri caste. He alleged that the minority MPAs spend more time seeking permits for liquor shops, petrol pumps and tenders rather than working for their communities. “Two million rupees, earmarked for the welfare of minorities, were wasted due to their lack of concern,” added Father Daniel Fayyaz, a Catholic priest.

Patiently listening to this was the general secretary of the Pakistan Peoples Party, Taj Hyder. “I had proposed the right for minorities to elect their representatives by means of multiple-member constituencies while we were doing the spadework for the 18th constitutional amendment,” he said.

He regretted that their efforts to get support from parliamentarians for Hindu marriage and property registration laws had gone in vain. “We drafted a law and held 12 consultation sessions to inform the lawmakers about it,” he said. But when it seemed that the law would go through parliament, the minority ministry was devolved by the 18th amendment, he recalled.

Understandably, there is bitterness. Father Fayaz said that the crescent and the star in the Pakistani flag were symbolic of the minorities. But if the government doesn’t want to address our problems, then it should remove them from the flag, he said.

The conference was also attended by Jai Prakash, a minister of Balochistan, MPA Nusrat Sehar Abbassi, the PML-N’s Hanif Siddiqui, Jamiat Ulema-i-Islam’s Taj Muhammad Nahiyon and the president of the Hyderabad division of the Jamaat-e-Islami, Shaikh Shoukat.

Natural disasters: Up to 5m people at risk again this year