Brazil has more than half of Latin America virus deaths

Brazil has more than half of Latin America virus deaths 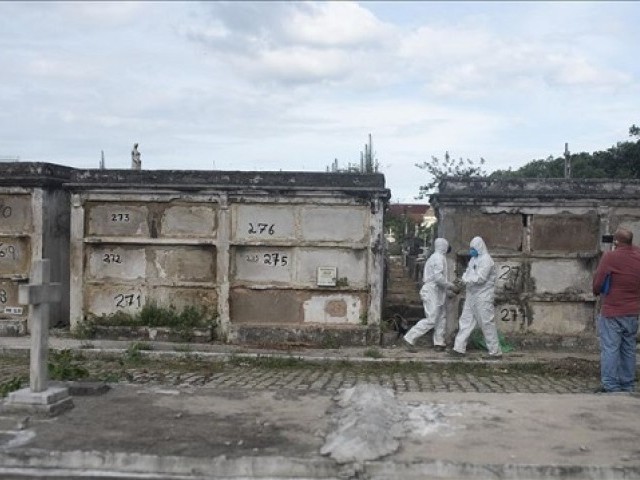 BOGOTA, COLOMBIA: Covid-19 has caused more than 237,000 deaths worldwide, according to a Johns Hopkins University tally.

In Latin America, the number of deaths linked to the coronavirus reached 11,600 on Friday. Brazil accounts for more than half of them.

Brazilian Health Minister Nelson Teich admitted on Thursday that the country “may reach 1,000 deaths per day next week,” as the virus continues to advance.

And if things are bad in Brazil, they are not getting better in other Latin American countries where cases continue rising.

Despite having taken strict social isolation measures, Peru is emerging as one of the Latin American countries worst hit by the pandemic. Ecuador and Mexico rank third and fourth behind Brazil and Peru.

As the advance of the coronavirus becomes devastating in Brazil, President Jair Bolsonaro keeps receiving criticism for his handling of the crisis.

Latin America’s largest country has so far been the hardest hit by the pandemic, with the number of fatalities reaching 6,017 as of Friday.

Authorities from neighboring countries including Paraguay, Argentina, Uruguay and Colombia have expressed their concern after the country reported more than 87,000 cases.

In Paraguay, military forces dug a shallow trench next to the main road into the city of Pedro Juan Caballero from the neighboring Brazilian city of Punta Pora to restrict traffic between the countries.

There is concern in Brazil regarding the vulnerability of the more than 800,000 inhabitants of indigenous communities in the country, many who have not developed immunity to certain diseases and live in remote areas with deficient healthcare facilities.

The scenes of a few days ago in Guayaquil, Ecuador, are now recreated in the Amazon city of Manaus, of more than 2 million people, where funeral homes have warned they will run out of wooden coffins by the weekend.

But despite the country’s dantean scenery, Bolsonaro wants to see soccer competitions restart soon. He said Friday that if soccer players are infected with the virus they have a very low chance of dying due to their physical condition.

“That’s because of their physical state, because they are athletes,” Bolsonaro said in an interview with Radio Guaiba.

The Brazilian president has repeatedly downplayed the coronavirus by ignoring social distancing measures, attending rallies where he hugs and greets fans, and calling coronavirus a “little flu.”

Although Peru was the first Latin American country to impose harsh quarantine measures on its citizens, the country of about 30 million people is second only to Brazil, with 1,124 deaths and 40,459 confirmed cases, most of them in Lima.

The government imposed a series of military-enforced measures that went further than many other countries in the region, including closing air and land borders, curfews, the prohibition of all private vehicles from the roads as well as forbidding movement between the country’s provinces.

Hospitals are complaining about the lack of medical supplies and doctors are protesting about not having proper safety measures.

The number of deaths from coronavirus rose to 1,063 in Ecuador, where there are more than 26,000 infected people.

The Minister of Government, Maria Paula Romo, reported that next week those who provide home repair services and technical assistance, such as plumbers or electricians, will resume their activities, along with deliveries.

Crematorium ovens in the Mexican capital are at the limit of their capacity when the country has not yet reached the peak of infections and deaths from the Covid-19 pandemic, while funeral homes suggest the use of mass graves to house human corpses.

Dominican Republic president Danilo Medina decreed the extension of the curfew for another 17 days starting on May 1 as a preventive measure against the coronavirus, which has left a death toll of 293.

With 422 confirmed cases, Bob Marley’s country is trying to prevent the spread of cases with measures such as calling on taxpayers to make use of its online portals instead of visiting government offices and standing in long lines.