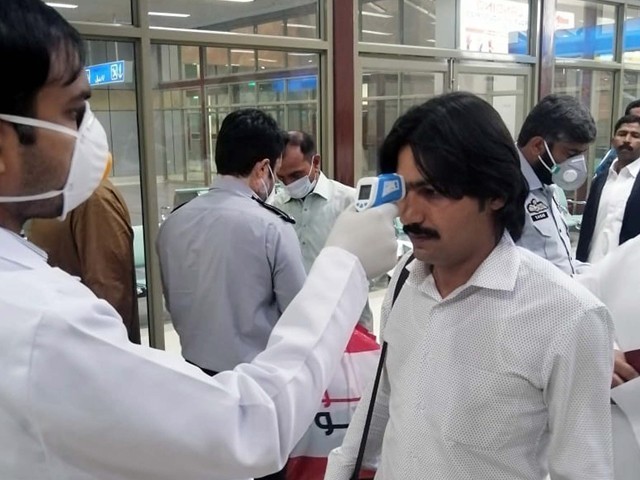 A passenger is being screened for novel coronavirus at Silakot airport. PHOTO: PPI

Low testing rates in Pakistan, India and Indonesia risk leaving the authorities blindfolded about the extent of coronavirus transmission in their countries, the World Health Organisation warned on Friday.

The tree Asian countries, which together hold about 25% global population, have tested just over 1,500 cases this week, the lowest ratio in the world per million residents, according to official data compiled by Bloomberg.

Pakistan had only tested 68 people out of one million while the situation was even worse in India and Indonesia with 33 and 26 respectively.

“Without testing, it’s like moving blindfolded,” Tedros Adhanom Ghebreyesus, the director general of WHO, said during the daily briefing on coronavirus.

He urged nations to increase the ratio to 10 tests for each positive diagnosis, which means India, Indonesia and Pakistan should each have tested at least 15,000 per million.

Calls for more tests are easier said than done, given that officials in countries such as India are struggling to secure foreign-made test kits while red tape is slowing the deployment of locally made ones. The number of tests in India stood at just 66,000 on April 3, far slower than the pace in the US and even further behind that of top testing countries like South Korea, sparking speculation that the official tally of infections is underestimating the true size of its outbreak.

“If these countries don’t identify and quarantine virus carriers before severe symptoms emerge, they risk overwhelming their healthcare systems that are already poorly equipped,” the WHO chief said.

If extensive testing is done, typically 3%-12% cases are positive, according to WHO. So far, Indonesia is the only nation that falls out of this range with 22% of total tests turning out to be positive.

It also has the highest mortality rate at 8.9% of positive cases compared with less than 3% for the rest of the countries.

Chief Minister Sindh Syed Murad Ali Shah also shared similar concerns with Prime Minister Imran Khan today that the number of cases could be much higher than the ones recorded in the province.

Briefing the premier over the situation in the province, Shah stated that only limited tests have been conducted in Sindh which is why the number of cases reported have been low.

This article originally appeared on Bloomberg