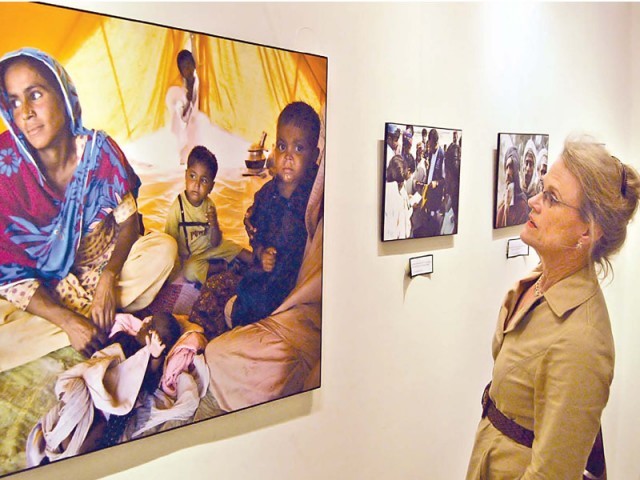 A pictorial exhibition was organised and a documentary screened at Nomad Art Gallery on Saturday to commemorate the first anniversary of floods that inundated one-fifth of Pakistan.

The exhibition was organised by the gallery in collaboration with the International Organization for Migration (IOM).

The nine-minute mini-documentary, “Recovery from Floods”, told the story of a mother of four children, Hafeez Mai, who lost her husband and home when the 2010 floods hit the Muzzaffargarh district in Punjab. Hafeez Mai’s story is similar to countless others who are still trying to recover from the affects of the floods.

“It is heartbreaking to see the huge needs that remain. Across the country, most people who lost their homes are still living in tents, health facilities are not fully functional and people have yet to re-establish a source of income,” said IOM Pakistan Chief of Mission Hassan Abdel Moneim Mostafa.

The photograph exhibit depicts the rehabilitation process that has been underway for the past one year. “One year after the disaster, massive needs still persist across the country,” Head of IOM Pakistan Emergency and Stablisation Unit Brian Kelly said.

In the twelve months since the travesty hit, IOM along with humanitarian partners has provided shelter and non-food items to more than 2.76 million flood affected people and have extended medical aid to over 120,000 people, according to a press handout.