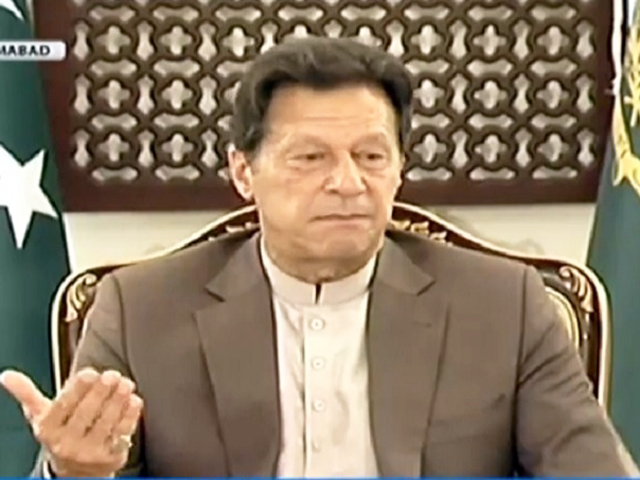 The novel coronavirus emerged in the central China city of Wuhan towards the end of last year and proliferated to almost the whole world within a couple of months. It’s not the virulence or fatality, but the infectivity of the new virus – also known as SARS-CoV-2 – that has set off a global frenzy.

The Covid-19 respiratory illness caused by this mysterious contagion has so far infected more than 2.5 million people in 202 countries and territories of the world – more than 173,000 of them have died and counting.

The virus has claimed at least 206 lives while at least 2,200 coronavirus patients have recovered.

The number of cases has continued to soar despite the country being under lockdown for the third consecutive week.

Punjab Chief Minister Usman Buzdar has confirmed emergence of 73 more cases of coronavirus in the province, bringing the total number of patients to 4,328.

51 patients have succumbed to the deadly virus while 724 have recovered from it across the province, he wrote on his official Twitter handle.

Total #COVID19 cases in Punjab are 4,328. 1,602 are Non-Quarantined cases in different districts and remaining are in different quarantines. Sadly we'v lost 51 precious lives, while 724 patients have fully recovered

63395 tests have been conducted & random testing started in LHR

12:05am: Islamabad thanks Abu Dhabi for repatriating stranded Pakistanis

Foreign Minister Shah Mahmood Qureshi has expressed gratitude to the United Arab Emirates (UAE) for extending support to Pakistan in the fight against the novel coronavirus pandemic and releasing 400 Pakistani prisoners and their repatriation to Pakistan.

He expressed these views during a telephonic conversation with his UAE counterpart Sheikh Abdullah Bin Zayed Al Nahyan.

On Tuesday, at least 1,183 Pakistanis stranded in the UAE were repatriated.

The number of confirmed patients of coronavirus is continuously on the rise in Azad Jammu and Kashmir (AJK) as two more people have been tested positive for Covid-19, one each in Muzaffarabad and Palandari areas, in the last 24 hours.

A total of 23 patients have already recovered from the mysterious disease in the state.

The federal cabinet has given a nod to export the anti-malaria drug, known as chloroquine phosphate or chloroquine, touted as a potential cure to the novel coronavirus to help countries to fight Covid-19.

Addressing a press conference in Islamabad following the federal cabinet meeting on Tuesday, Special Assistant to the Prime Minister on Information and Broadcasting Dr Firdous Ashiq Awan said the decision was taken to help the friendly countries “in their time of need”.

“Pakistan has surplus stock of around 40 million [chloroquine] tablets and sufficient raw material to produce the drug in great number,” she said while assuring that the “export of drug will not cause the shortage for the domestic consumption”.

However, sources privy to the development told The Express Tribune that some cabinet ministers – Asad Umar, Shafqat Mehmood, Sheikh Rashid, Shireen Mazari – opposed the move fearing that the drug may run out in the country.

Prime Minister Imran Khan on Tuesday was tested for Covid-19 after Edhi Foundation Chairman Faisal Edhi, who met the premier a few days ago, diagnosed positive for the disease.

“As a responsible prime minister and a responsible citizen I am happy to announce that the prime minister has agreed to get tested [for coronavirus] on my advice,” Shaukat Khanum Memorial Cancer Hospital CEO Dr Faisal Sultan, who is also the premier’s personal physician and focal person on Covid-19, told reporters.

Khyber-Pakhtunkhwa (K-P) Health Minister Taimur Khan Jhagra has confirmed six more casualties due to coronavirus in the province, taking the death toll to 80.

Taking to Twitter on Tuesday night, Jhagra also said that another 69 people have contracted the deadly virus. This brings the total number of cases to 1,354 in the province.

50 of the cases discovered are in Peshawar and Malakand divisions.
Q pic.twitter.com/PoJyxUhLza

At least 2,258 people who attended a religious mass gathering in Raiwind — a town located in Lahore’s suburbs — have been tested positive for Covid-19 so far, which accounts for around 27 per cent of the country’s total coronavirus cases.

The nationwide tally of coronavirus patients stands at 9,565 with 198 deaths.

The authorities are now tracking around 70,000 people who attended the event hosted by the Tableeghi Jamaat.

The five-day annual gathering — which began before Pakistan’s lockdown was implemented — was attended by as many as 70,000 including 3,000 travelers before it was cut short, police officer Ghazanfar Shah told Bloomberg by phone.

Religious groups have been linked to virus hotspots around the world. An obscure church in South Korea attracted global attention after being linked to a sudden spike in coronavirus infections that accounted for about 5,200 confirmed cases in February. Singapore later banned the local activities of the South Korean sect.

The Balochistan health department, in it’s daily situational report, has said that 30 more people have contracted novel coronavirus to bring the province’s tally to 495.

Six people have lost their lives while 165 have recovered from the mysterious disease in the province so far.

Prime Minister Imran Khan has formally launched the Ehsaas Ration Portal to help philanthropists and charities in reaching out to deserving people amid a countrywide lockdown imposed to curb the spread of coronavirus.

On the occasion, Special Assistant on Social Protection Dr Sania Nishtar briefed the premier about the initiative.

Ehsaas Ration Portal will help philanthropists, charity organisations and other non-government organisations (NGOs) in reaching out to deserving people and providing ration to poor segments of the society.

Hailing the initiative, Prime Minister Imran said it will play a vital role in reaching out to the beneficiaries and making the ration distribution system completely transparent and merit based.

The Punjab health department has reported 60 new cases of coronavirus to raise provincial tally to 4,255.

This includes 742 pilgrims at quarantine centres, 1,857 members of Tableeghi Jamaat. 91 inmates and 1,545 citizens, according to a situational report issued by the primary and secondary health department on Tuesday. 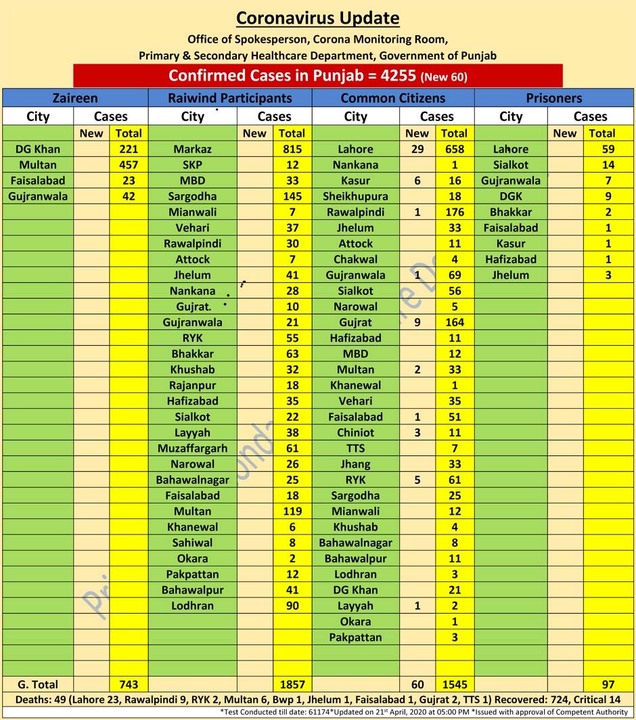 1st batch of 250 students from Gilgit-Baltistan in Karachi will be tested for coronavirus before being allowed to go back to their howme town, Sindh government’s spokesperson Murtaza Wahab said in a tweet on Tuesday.

“1st batch of 250 students from Gilgit-Baltistan in Karachi is being registered in Shah Faisal Town, District Korangi for #COVIDー19 tests. Insha’Allah the ones who test negative will be allowed to go back to GB with test results. All tests are being done free of cost by #SindhGovt,” he wrote.

1st batch of 250 students from Gilgit Baltistan in Khi is being registered in Shah Faisal Town, District Korangi for #COVIDー19 tests. Insha’Allah the ones who test negative will be allowed to go back to GB with test results. All tests are being done free of cost by #SindhGovt pic.twitter.com/7FaDFyW3FH

“In any society of the world, the lockdown cannot remain in place for an indefinite period,” he maintained.

“We are trying our best to ease difficulties being faced by the people during these difficult times,” he said.

“In an independent society we cannot stop people from going to mosques,” said the premier.

The PM said the government has formed a strategy through consultation with Ulema for congregational prayers in Ramazan so that Muslims can say prayers in mosques. “But I will urge people to offer prayers at their homes,” he suggested.

“If the virus spreads, we will have no other option but to impose a ban on congregational prayers,” he explained.

Federal Minister for Planning and Development Asad Umar, speaking on the occasion, warned India to refrain from spreading lies that Pakistan is trying to infiltrate infected coronavirus patients into Indian Occupied Jammu and Kashmir (IOJ&K).

Dr Faisal Sultan, the government’s focal person on coronavirus, said that Prime Minister Imran Khan will undergo Covid-19 test due to a recent meeting with Faisal Edhi, the philanthropist who has tested positive for coronavirus.

Federal Minister for Industries Hammad Azhar said his ministry is going to announce an economic package for unemployed and laid-off workers.

PM’s aide on national security, Moeed Yusuf, said Torkham border has already been opened to allow stranded Pakistanis in Afghanistan to return to the country. “Chaman border will also be opened soon,” he added.

Pakistanis returning to the country will have to spend at least two days at quarantine centres and get tested for the virus before being allowed to leave for their homes, he maintained.

In my discussions with Ulema for ensuring 20 point SOPs for Taraveeh, I had a talk with Mufti Muhammad Naeem of Jamia Binoria in Karachi yesterday. He informed me that he had sent an Arabic translation of our 'Ijma' of 20 points to Saudi Arabia. Ulema & Citizens must take lead.

The CM stated this during the National Command and Operation Centre (NCOC) meeting after three Tableeghi Jamaat members, who had returned from Khyber-Pakhtunkhwa to their village in Tando Mohammad Khan, tested positive.

Resident of Surlaspur, the patient had been quarantined in his home.

He was moved to an isolation centre after his test came back positive.

Talking to media in Muzaffarabad, the president said he came to review the steps taken by the Azad Jammu and Kashmir (AJK) government to curb the spread of the virus.

Alvi lauded the government’s efforts and appreciated the people of the region for following government orders.

Three members of the Tablighi Jamaat, who were earlier in quarantine in Punjab and Khyber Pakhtunkhwa (K-P), have tested positive for the novel coronavirus after being tested in Sindh on their return to the province.

The three individuals were given clearance certificates by Bacha Khan Medical Complex after the completion of their quarantine period. The members of the missionary group belong to Tando Mohammad Khan.

According to the director-general PDMA, the equipment for medical staff includes N-95 masks, gloves, face shields and sanitizers and other related items.

He said emergency centre of PDMA is actively operating round the clock and people can contact toll-free number 0800 01700 in an emergency situation.

Pakistani currency recovered further by Rs1.49 to a one-month high of Rs162 against the US dollar in the interbank market during intraday trading on Tuesday.

The sharp recovery in rupee was seen following the international oil price crashed to zero and even to -$37 per barrel on May futures counter.

He also reported five more deaths from the virus in the past 24 hours. The total deaths in the province now stand at 66.

The number of recoveries was stated to be 30, which means the current provincial tally stands at 665.

The following information is relevant to assess the situation of #COVIDー19 in Sindh as of 21st April at 8 AM:

In the last 24 hours, 30 people have recovered from corona in Sindh

Head of the Edhi Foundation, Faisal Edhi, tested positive for coronavirus in Islamabad.

“He has tested positive,” confirmed Mohammad Bilal, spokesperson for the Edhi Foundation.

The organisation’s chairman added that the test was conducted two days ago.