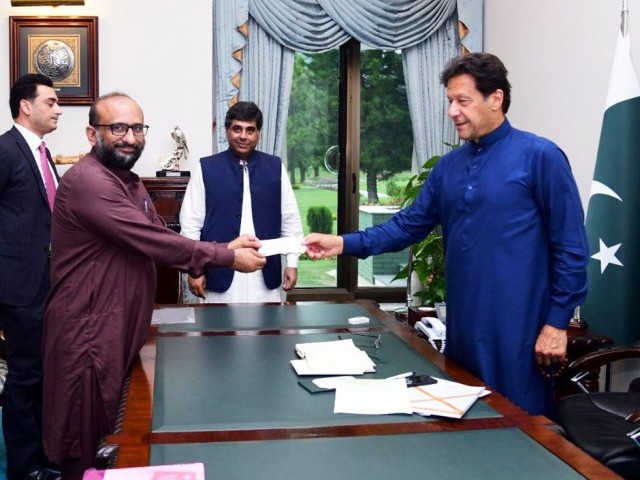 Premier agrees to his physician’s advice after Faisal Edhi who recently met him diagnosed positive for disease. PHOTO: PID

ISLAMABAD / KARACHI: Prime Minister Imran Khan on Tuesday was tested for Covid-19 after Edhi Foundation Chairman Faisal Edhi, who met the premier a few days ago, diagnosed positive for the disease.

“As a responsible prime minister and a responsible citizen I am happy to announce that the prime minister has agreed to get tested [for coronavirus] on my advice,” Shaukat Khanum Memorial Cancer Hospital CEO Dr Faisal Sultan, who is also the premier’s personal physician and focal person on Covid-19, told reporters.

Earlier in the day, Dr Sultan had told the media that PM Imran was chairing a cabinet meeting and after he was finished, he would meet him and recommend that he should be tested for the virus.

Faisal Edhi, son of the late renowned philanthropist Abdul Sattar Edhi, had met the prime minister in Islamabad on April 15 to donate Rs10 million to the government’s coronavirus relief fund.

A picture shared by the state-run PTV’s twitter account showed Edhi handing over a cheque to the prime minister. Both Edhi and PM Imran as well as the two other people seen in the picture were not wearing protective masks.

Edhi later told a TV news channel that he and two industrialists had spent around six to seven minutes with the premier.

Dr Sultan further said the tally of Covid-19 cases in the country was expected to reach between 12,000 and 15,000 by the end of current month according to the government estimates.

He added that though the coronavirus situation in the country was better than that in other countries and it was necessary to keep it under control.

PM warns people to follow SOPs to avoid closure of mosques in Ramazan as Covid-19 tally jumps to 9,664

Edhi has placed himself in self-quarantine at Islamabad’s Edhi Home.

Mohammad Bilal, spokesperson for the Edhi Foundation said the test was conducted two days ago at Al-Shifa hospital in the federal capital.

“We feel he contracted the virus in Islamabad, as he has been there for a week,” he added.

Edhi has been on the forefront in the fight against the coronavirus pandemic with his charity organisation. He is also a member of the Sindh’s coronavirus emergency fund.

His son, Saad Edhi, said his father had started developing symptoms including mild fever and headache soon after meeting the prime minister. He added that the symptoms lasted for four days after which he had himself tested and was diagnosed positive for the disease.

In a video message, Faisal Edhi said he was not suffering from any symptoms at the moment but his results had come back positive.

He urged his foundation to continue working hard to provide relief to people.