Her unexpe­cted recove­ry was a ray of hope in Brazil­
By Reuters
Published: April 13, 2020
Tweet Email 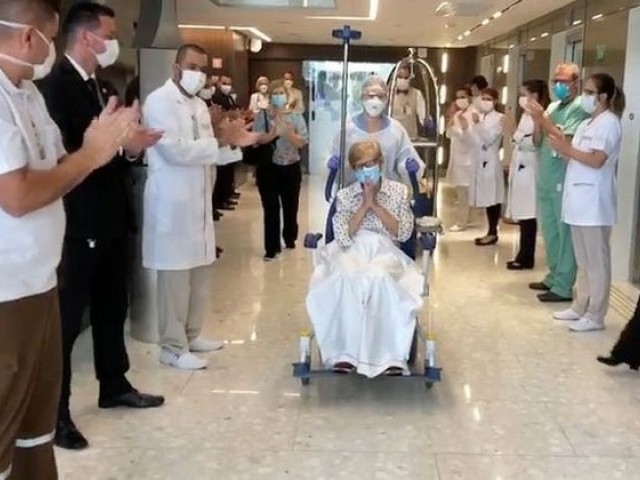 RIO DE JANEIRO: When 97-year-old Brazilian Gina Dal Colleto was hospitalized on April 1 with coronavirus symptoms, few could have thought she would survive the deadly virus.

On Sunday, however, Dal Colleto was pushed in a wheelchair out of Sao Paulo’s Vila Nova Star hospital to applause from doctors and nurses, becoming the oldest known survivor of COVID-19 in Brazil, the Latin American country worst-hit by the outbreak.

Her unexpected recovery was a ray of hope in Brazil, where the coronavirus has laid bare a stretched public health system and exposed fierce political debate over how to best tackle the virus’ spread and prop up the country’s economy.

“Even with almost a century of life, Gina has a very active routine and enjoys walking, shopping and cooking,” the statement said. “She has six grandchildren and five great-grandchildren.”

While she was hospitalized, Dal Colleto was put on oxygen and admitted to intensive care, the statement said.

On Sunday, Brazil’s health ministry said 1,223 people had died as a result of the outbreak, 99 more than the previous day’s total. Brazil now has 22,169 confirmed cases.

Brazilian President Jair Bolsonaro, a far-right former army captain, has chafed at social distancing measures imposed by state governors and even his own health officials. He wants the economy restarted, arguing that extended shutdowns pose a greater risk than a disease he calls a “little cold.”

However, that stance has cost him in the polls and most nights, in cities across Brazil, quarantined Brazilians are banging pots and pans in protest at his handling of the crisis.

On Sunday, Bolsonaro said he thought that the coronavirus was on its way out of Brazil, although he gave no explanation. In its place, he added, was coming further unemployment.

“It seems that the virus issue is starting to go away, but unemployment is coming … hard. We must fight these two things,” he said in a televised call with religious leaders.

‘Ghosts’ scare Indonesians indoors and away from coronavirus