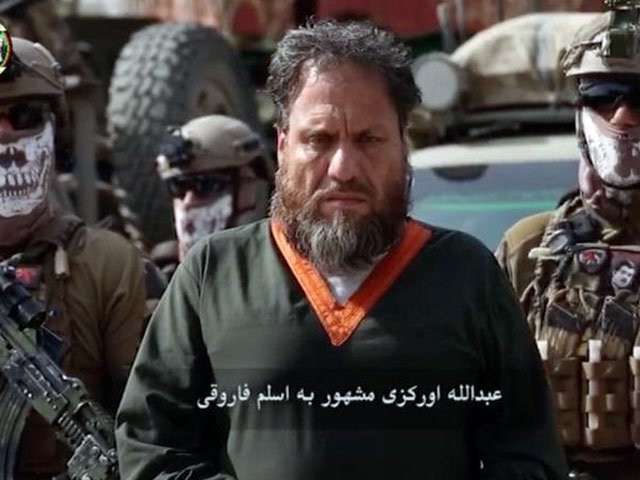 On April 4, Afghanistan’s intelligence agency, the National Directorate of Security, announced that they had arrested Farooqi, whose real name is Abdullah Orakzai, in Kandahar province.

The demand was made by the Foreign Office with Afghan Ambassador on Thursday.

“The ambassador of Afghanistan to Pakistan was called to the Ministry of Foreign Affairs and conveyed Pakistan’s views about the arrest of ISKP leader, Aslam Farooqi, by the Afghan authorities on April 5, 2020,” said a statement issued by the Foreign Office.

It was emphasised that Pakistan had been expressing its concerns over the activities of the group, which were clearly detrimental to Pakistan.

Pakistan’s position in this regard was being regularly shared with the Government of Afghanistan and others concerned.

“It was underscored to the ambassador that since Aslam Farooqi was involved in anti-Pakistan activities in Afghanistan, he should be handed over to Pakistan for further investigation,” the statement noted.

It was further underlined that the two sides should coordinate actions against the menace of terrorism, including through established mechanisms.

The group has also been involved in several terrorist attacks in Pakistan. Islamabad has long suspected that the group enjoyed tacit support of the Afghan intelligence agency. It also accused the group of being the proxy of RAW.

It was not clear under what circumstances Aslam Farooqi was arrested, though the group claimed he himself surrendered to the Afghan authorities.

There were reports that he might have handed himself over to the Afghan authorities in order to avoid being targeted by the Afghan Taliban, who agreed to eliminate all such groups using the Afghan soil against others.

Meanwhile, speaking at the weekly briefing, Foreign Office spokesperson Aisha Farooqui told reporters that Pakistan continues to support the efforts aimed at seeking a peaceful solution to the Afghan war.

Commenting on the Taliban decision to call off talks with Kabul over prisoners’ exchange, she emphasised that the US-Taliban deal offered a rare opportunity for peace and “all sides should seize this opportunity”.

Responding to another question, the spokesperson said Dr Afia Siddiqui, who has been serving jail term in the US over charges of attacking American soldiers, was doing well amid the outbreak of COVID-19.

“Pakistan’s Consul General in Houston has been tasked to inquire about the wellbeing of Dr Afia Siddiqui given the spread of Coronavirus.

“The CG has called the prison warden to inquire about the health of Dr Afia and was informed that she was doing well,” the spokesperson said.

She added Pakistan’s Consulate General will continue to get updates regarding Dr Afia’s health and would also resume regular visit to the prison as soon as US authorities permit such visits owing to the prevailing COVID-19 pandemic.