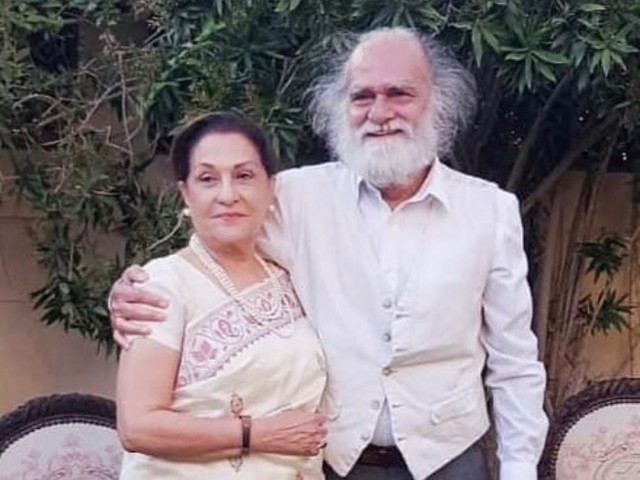 The dada from Alif and Suno Chanda’s Beejaan looked absolutely adorable in their picture circulating on the internet since last night. The wedding was clearly a low key affair, with no other pictures of the couple or the event found anywhere. There has been no public announcement from the celebrities either. 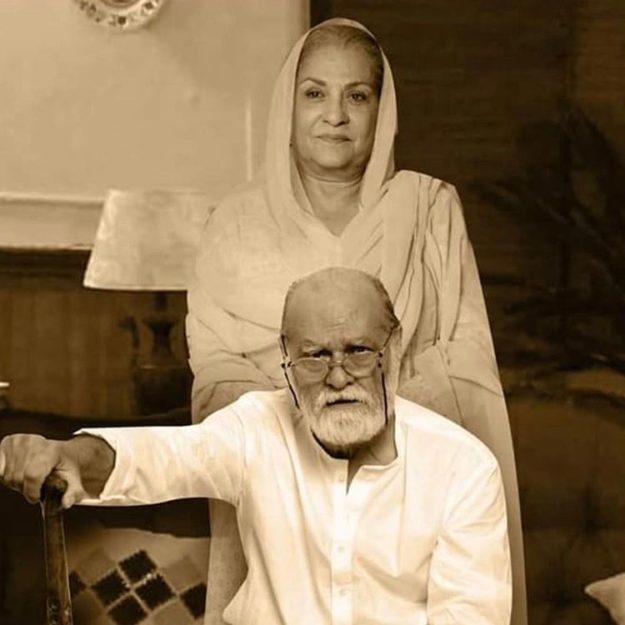 But several people, including their close friends have been congratulating Ahmed and Sehbai on their Facebook profiles. 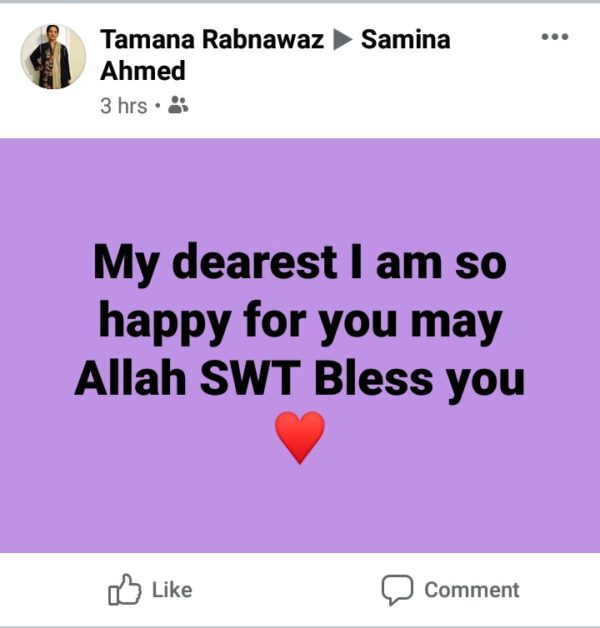 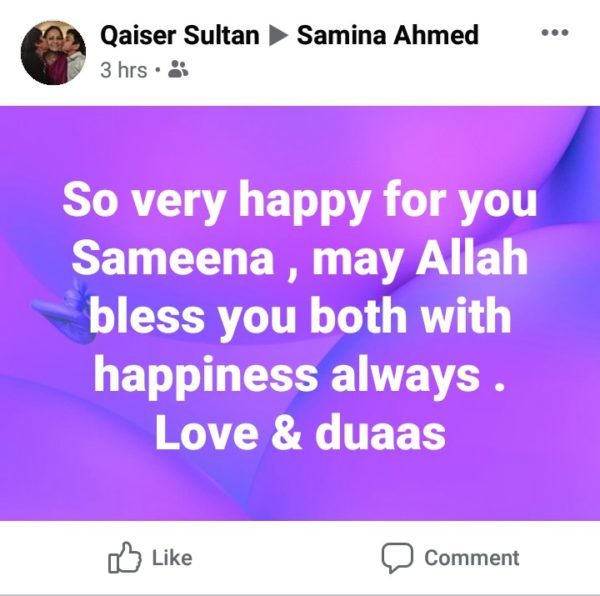 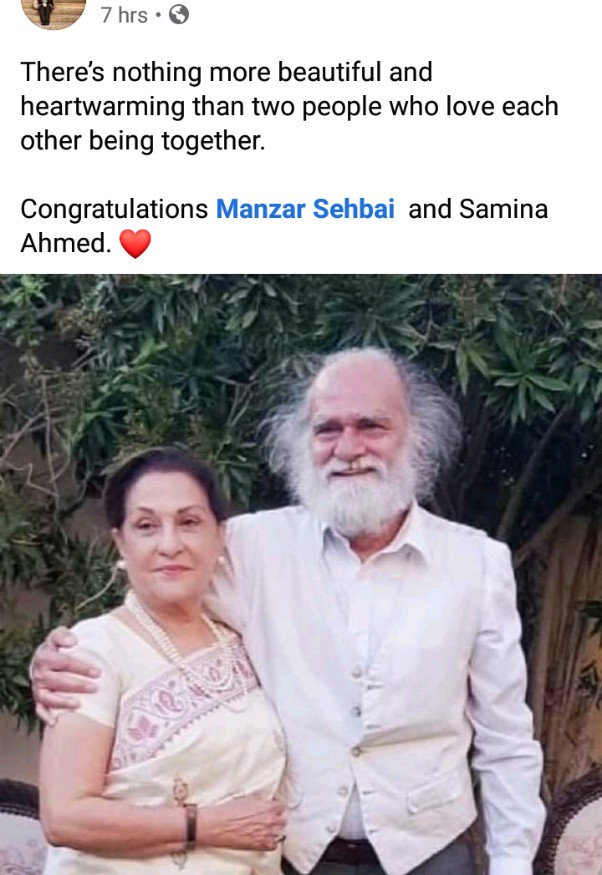 The former has been a part of the television industry since 50 years now and Sehbai has many dramas under his belt too. He also made his big screen debut with Shoaib Mansoor’s Bol. The Dolly Ki Ayegi Baraat star’s former husband Fariduddin Ahmed passed away back in 1993. 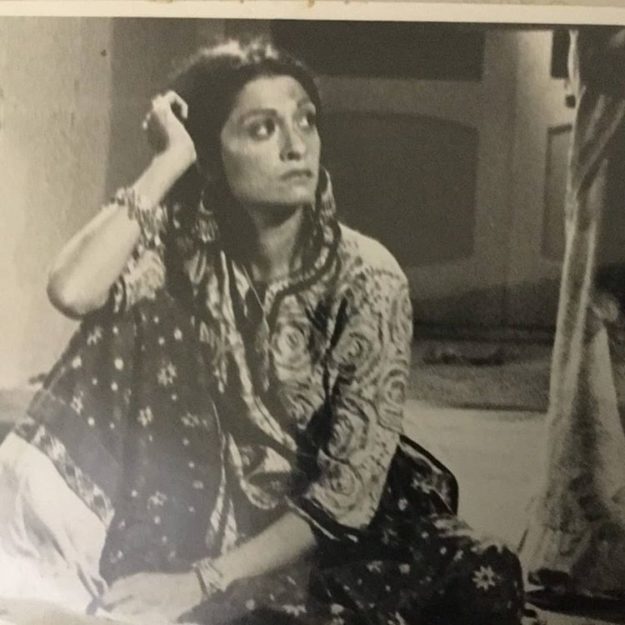 The two have been trending on Twitter since the news of their nuptials first broke. Fans are lauding them for breaking the stereotypes and even comparing their marriage to that of the 18-year-old couple that went viral recently, adding that this one is better.

“They set a better trend than those 18-year-old kids did. No publicity, nothing, even though as actors, they need a limelight. But no. Simplicity ki misaal qaim kardi (They have set the standard of simplicity). Best people,” wrote a user.

#SaminaAhmed They set a better trend than those 19 years old kids did. no publicity nothing, eventhough as an actors they need a limelight but NO simplicity ki misaal qaim krdi. best people.

Another wrote, “There must be millions of tiny moments that created your love story. Samina Ahmed looking gorgeous as always. A beautiful couple made in heaven.”

There must be millions of tiny moments that created your love story.#SaminaAhmed looking gorgeous as always. A beautiful couple made from heaven.

One said, “Shattering taboos of not marrying in old age.”

A fan wrote on Instagram, “Age is just a number! Veteran actors #SaminaAhmed and #ManzarSehbai found love and cemented it with marriage in the autumn of their beautiful lives. May they be forever young and free where it matters: in their hearts.”

Age is just a number! veteran actors #SaminaAhmed and #ManzarSehbai who found love and cemented it with marriage in the autumn of their beautiful lives. May they be forever young and free where it matters; in their hearts . . . . #Reportingtrends#PakistaniCelebrities #PakistaniDrama #PakistaniActress #PakistaniActor #PakistaniFashion #Showbiz #PakistaniWedding #PakistaniBride #Lollywood

Meanwhile, some fans took their example to advise others on how they can restart their lives at any age by getting married whenever they want.

I congratulate with my warm wishes to the veteran actress Samina Ahmed who tied the knot with Manzar Sehbai .
you can restart your life at any time#SaminaAhmed #ManzarSehbai pic.twitter.com/PqMbS7Ae2R

Some users continued to add that it was “high time society understood that a marriage is about companionship and not just producing kids.”

High time our society understood that a marriage is about companionship, not necessarily about producing kids only. At any stage of life if two people mutually agree to become companions for life, then why not? #SaminaAhmed

She also quoted Samina’s earlier statements on why she hadn’t gotten married again earlier. “When, on Rewind with Samina Peerzada she was asked why she didn’t marry again, Samina said she never had the guts since her children were nine or 10 when she became a single mother. She had said, ‘Main doosri shadi ker ke settle ho jati magar bachon ke sath zayaadati hoti (I would have remarried and settled down again but it wouldn’t have been fair to my children)’.”

Congratulations to the happy couple!

Mahira Khan promises to return to television after completing her film