The event would go down in histor­y as one of the rare moment­s the compan­y turned its weakne­ss into streng­th
By Ather Ahmed
Published: April 7, 2020
Tweet Email 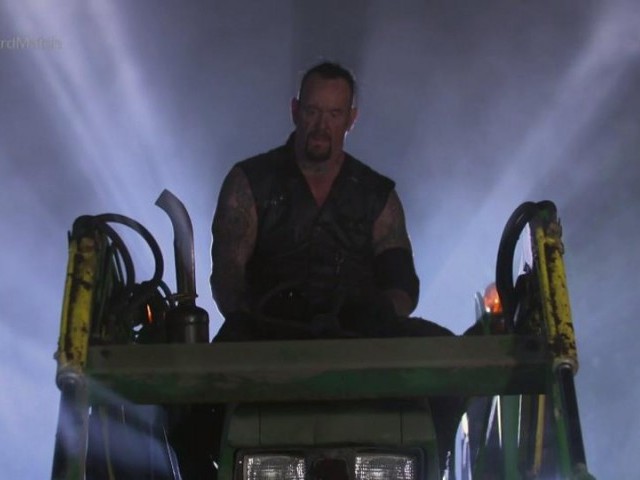 From Roman Reigns backing out last minute to the entire show being taped at WWE’s training facility, this weekend’s offering was expected to be a recipe for disaster. 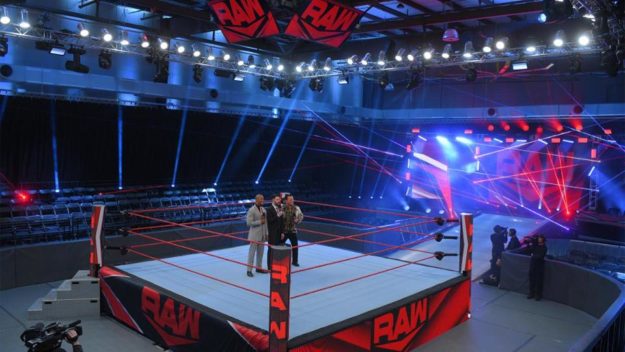 Surprisingly, it turned out to be anything but disappointing. Wrestlemania 36 would surely be remembered in the WWE’s history as one of the rare moments where the company turned its weaknesses into its strength. Two matches, in particular, stole the show and would definitely be remembered as all-time classics.

Ironically, these matches were entirely stripped off all the major elements of a wrestling match. They were shot and edited like a film, being heavily reliant on the storyline, with in-between dialogues and background score substituting for the crowds’ jeers and boos.

The first bout in them was between Undertaker and AJ Styles that ended being the main event of the day 1 of Wrestlemania. 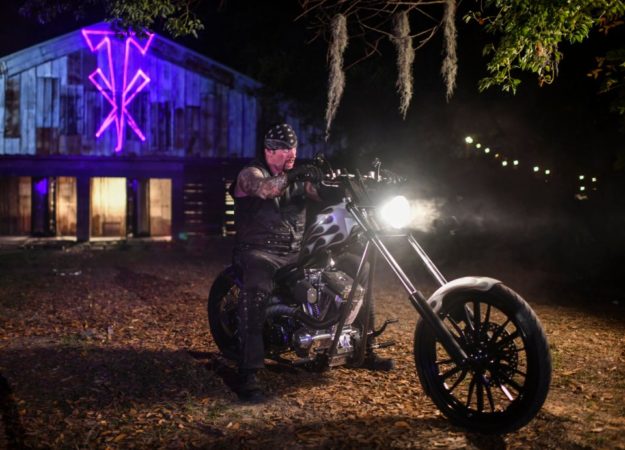 Instead of taking place in a ring with certain props such as a cage or a casket being added in the rules, the match took place in a cemetery. The build-up for the match saw AJ Styles fitting the role of the cocky heel perfectly as he called out the Undertaker for being the ‘shell of a man he once was’. Through the segments preceding Wrestlemania, AJ continued to refer to Undertaker by his real name Mark Calaway, while also bringing the latter’s wife former WWE superstar Michelle Mccool in his barrage of insults. 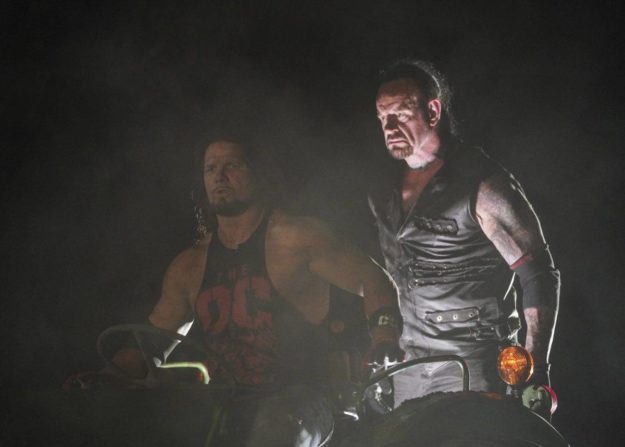 In the storyline, AJ Styles wanted to literally bury the Undertaker at Wrestlemania. The start of the match saw AJ making his way into the boneyard in a hearse laying down in a casket to the Undertaker’s own funeral bell theme, perhaps as a last insult to the veteran.

The Undertaker, on the other hand, came as the real-life Mark whom AJ had gone on to ridicule. Riding a motorcycle similar to his American bad-ass gimmick, the Undertaker made his way to the venue with Metallica’s Now That We’re Dead playing in the background.

Perhaps with the lyrics  ‘Now that we’re dead, my dear, We can live forever,’ Undertaker was telling off critics who had bashed him for returning to the ring after literally hanging his boots following the defeat to Roman Reigns at Wrestlemania 33. 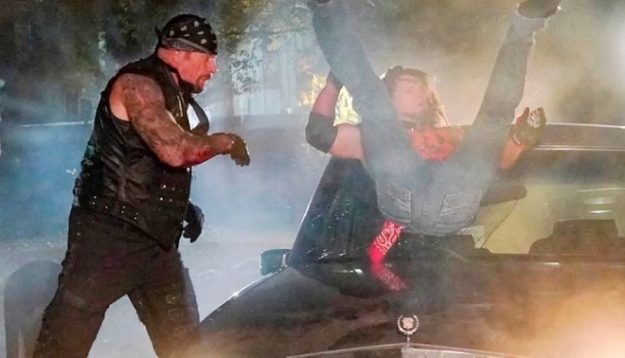 The match lasted for 35 minutes, and just like the final fight of any action film, saw false victories with only the villain to rise up again. It was great to see that for the most part Undertaker was presented as the mortal while his nemesis was the one playing mind games and using external forces to win the bout.

At one point where Undertaker had seemingly ended AJ, the latter’s lackeys’ Luke Gallows and Karl Anderson along with a bunch of men dressed up druids beat him up. In the end, however, the Undertaker became victorious with him also using his trademark explosions and disappearing act to remind AJ that he’s still the Phenom. No wonder the audience has deemed it one of Undertaker’s most phenomenal matches.

Demons of Cena’s past

The other highlight was the FireFly Fun House match between John Cena and the Fiend. If Undertaker and AJ’s match took a page out of Tarentino and Rodriguez’s book, this match had Alejandro Jodorowsky and David Lynch written all over it. The bizarre segment saw Cena going down the rabbit hole of his own failures, successes, desires, and fears among other weird dramatic happenings. The bout took place in a parallel universe that according to the Fiend was a place where Gods, Demons, Angels and monsters were neighbours. 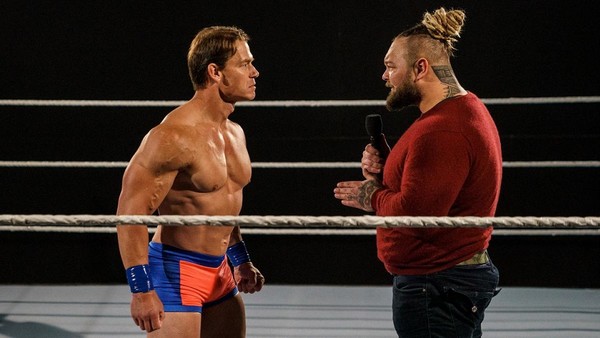 From Cena suddenly reliving his first match with Kurt Angle, a period which the superstar has gone on to call a moment where he failed everybody, to the rapper gimmick that made him famous, Cena relived his entire career all the while the Fiend mocked him. 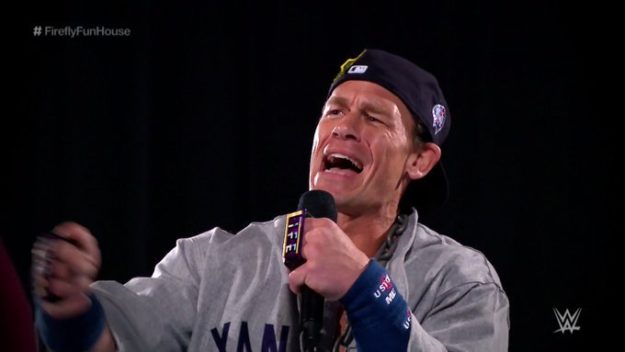 In between Cena also saw him being in the shoes of Hulk Hogan, from when the latter was the role model to kids in the then WWF to when he became the cool heel leader of NWO in WCW. 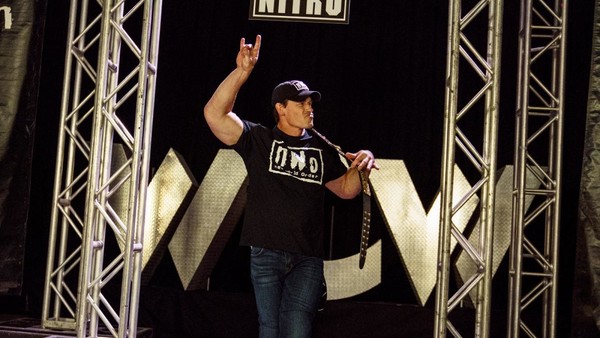 This possibly symbolised Cena’s own conflict with the WWE fan base. The entire motif of the match was Cena describing the Fiend as the most overrated superstar in WWE whose existence he should’ve ended six years ago in their previous match. The end saw Cena losing to Fiend with his own words echoing in the background. 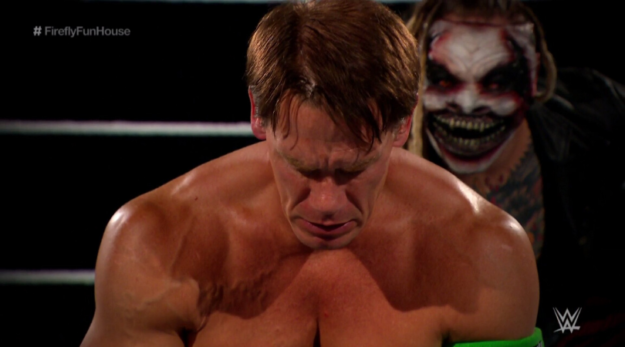 A new direction for WWE

The film-centric direction isn’t new to the wrestling world. The concept was started by Lucha Underground and made more famous by Matt Hardy during his stint in TNA.

Hardcore wrestling fans would argue that WWE is taking credit for an old concept. That might be true but the same could be said about the Attitude era when the company shifted in an adult direction as it borrowed elements from the relatively small ECW. Perhaps with such segments taking place at the grandest stage of them all, pro-wrestling has had its game-changing moment.

SHE’s got everything apart from a compelling story